Social scientists are to examine whether action figure dolls help form children’s opinions on war and have a role to play in shaping the future of our armed forces.

It is the first time research has examined the role of toys in the making of young citizens. The £492,508 project is funded by the Economic and Social Research Council.

The researchers, Dr Sean Carter, from Geography at the University of Exeter, Dr Tara Woodyer, of the University of Portsmouth and Professor Klaus Dodds, of Royal Holloway University of London, have expertise in human geography, children’s play, childhood studies, geopolitics and the culture of war. 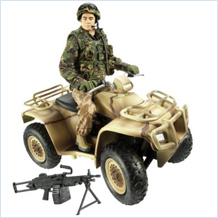 The team expect to report their findings in 2016, shortly after the expected withdrawal of British troops from Afghanistan, which itself will inform the research.

Dr Woodyer said: “This research project is highly innovative and the war play debate has not been addressed in this way before.

“We are not examining whether war toys are good or bad, or the psychology of such play. We will be examining how such toys help shape British attitudes to our armed forces, how do we learn to buy in the Help for Heroes, for example, and what ideas are children incorporating from outside sources, such as television news footage and children’s films addressing war and conflict.

“The war on terror is being played out everywhere and since 9/11, our security and surveillance has come under intense examination. Understanding war, conflict and security in modern life is an urgent task for social scientists.”

The research will focus on best-selling military action figure toy range, the Her Majesty’s Armed Forces (HMAF) dolls, licensed by the Ministry of Defence.

HMAF dolls are modelled on current British armed forces and the current best-seller is a ten-inch high infantry soldier in desert combats. The doll comes with an assault rifle, radio, flak jacket, body armour, helmet and goggles. Its makers say the reason it has sold so well is due to the “free promotion” provided by coverage of British military operations in Afghanistan in television news bulletins.

Dr Woodyer said: “Play has frequently been overlooked as irrelevant to how people come to understand the world, yet it is precisely this apparent banality, the taken for granted nature of play that allows its role to go unchallenged.

“Toys, and how children play with them, are not just a response to the world, they help shape our culture.

“The role of action figure dolls has been unduly neglected, especially given the enormous academic attention focused on their female equivalent, Barbie.”

The research will include tracing the history and development of the action figure toy in British homes; the toys’ role in wider geopolitical climates and cultures; bringing a social sciences perspective to museum audience research; and to develop resources for the V&A’s Museum of Childhood, which is a major partner in the research.