Twitter clips human thoughts to a mere 140 characters. Animals’ scent posts may be equally as short, relatively speaking, yet they convey an encyclopedia of information about the animals that left them.

In the current issue of the Proceedings of the National Academy of Sciences, a Michigan State University researcher shows that the detailed scent posts of hyenas are, in part, products of symbiotic bacteria, microbes that have a mutually beneficial relationship with their hosts.

“When hyenas leave paste deposits on grass, the sour-smelling signals relay reams of information for other animals to read,” said Kevin Theis, the paper’s lead author and MSU postdoctoral researcher. “Hyenas can leave a quick, detailed message and go. It’s like a bulletin board of who’s around and how they’re doing.”

Interestingly, it’s the bacteria in pastes – more diverse than scientists had imagined – that appear to be doing the yeoman’s job of sending these messages.

“Scent posts are bulletin boards, pastes are business cards, and bacteria are the ink, shaped into letters and words that provide information about the paster to the boards’ visitors,” Theis said. “Without the ink, there is potentially just a board of blank uninformative cards.” 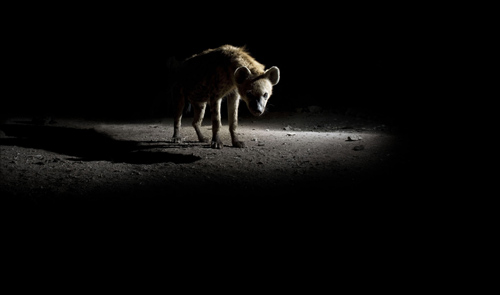 MSU research shows that the detailed scent posts of hyenas are, in part, products of symbiotic bacteria, microbes that have a mutually beneficial relationship with their hosts. Image courtesy of MSU

By using molecular surveys, they were afforded unprecedented views of the diversity of microbes inhabiting mammals’ scent glands. The researchers were able to show that the diversity of odor-producing bacteria in spotted hyena scent glands is much greater than historical studies of mammals had suggested.

The diversity, however, still consistently varies between hyena species, and with sex and reproductive state among spotted hyenas, Theis added. Importantly, the variation in scent gland bacterial communities was strongly correlated with variation in the glands’ odor profiles, suggesting that bacteria were responsible for the variation in scent.

“There have been around 15 prior studies pursuing this line of research,” Theis said. “But they typically relied on culture-based methods, an approach in which many of the similarities and differences in bacterial communities can be lost. If we used those traditional methods, many of the key findings that are driving our research wouldn’t be detected at all.” 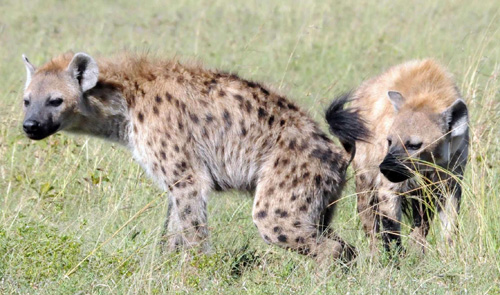 Hyenas scent posts may be short, relatively speaking, yet they convey an encyclopedia of information about the animals that left them. Image courtesy of MSU

For the current paper, Theis’ team was the first to combine microbial surveys and complementary odor data from wild animals. The studies’ findings leave Theis eager to return to the field.

“Now I just need to get back into the field to test new predictions generated by this study,” Theis said. “The next phase of this research will be to manipulate the bacterial communities in hyenas’ scent glands to test if their odors change in predictable ways.”

Theis is now also conducting similar research in birds, in collaboration with MSU researcher Danielle Whittaker. Being able to cast a wide research net and connect quickly with collaborators are some of the benefits of working for MSU’s BEACON Center for the Study of Evolution in Action, Theis added.

Theis’ research is supported in part by the National Science Foundation. Theis and Holekamp are participants in the NSF-funded MSU BEACON Center.