Without any sort of legal protections in place, journalists reporting on the National Security Agency’s (NSA) massive surveillance program are facing a huge challenge, said Spencer Ackerman, the Guardian’s U.S. national security editor, during a panel discussion at the Law School on Dec. 5.

Ackerman took part in a discussion titled “Investigative Reporting, Espionage and NSA Leaks” with James Bamford, who is widely regarded as the chief chronicler of the NSA, and Gabriel Schoenfeld, a senior fellow at the Hudson Institute. The discussion, sponsored by KLAMP and the Poynter Fellowship in Journalism, was moderated by David A. Schulz, the Floyd Abrams Clinical Visiting Lecturer in Law at Yale Law School and partner at Levine Sullivan Koch & Schulz LLP in New York.

Ackerman cited the federal case against New York Times reporter James Risen, who was ordered last summer to testify in the trial of a former CIA official accused of leaking information to him, and investigations of journalists at the Guardian for their roles in the Edward Snowden leaks about the NSA. In a recent government hearing in Britain, he said, an official asked a Guardian editor: “Don’t you love this country?”

Risen faces a possible prison term for not revealing his sources, noted Ackerman, adding that fear of legal recriminations is having “a chilling effect on journalism.”

“People are more reluctant to talk to me,” he continued.

Ackerman said a trusted legal scholar told him that if the U.S. Justice Department were to prosecute journalists for revealing government secrets, it would have a sound legal basis.

“I didn’t find this particularly reassuring,” the journalist said. 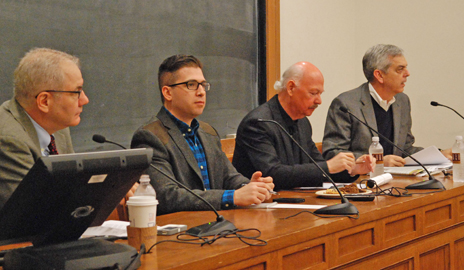 Gabriel Schoenfeld, Spencer Ackerman, James Bamford, and David Schulz in a discussion about the National Security Agency on Dec. 5 at the Law School. (Photo by Alaina Pritchard)

The discussion began with a short history of the NSA by Bamford, whose book “The Puzzle Palace” was the first about the agency. He has since written two others about the NSA: “Body of Secrets” and “The Shadow Factory.” He noted that — unlike most federal agencies — the NSA was created via a “top-secret, seven-page memorandum” by President Harry Truman in 1952. Congress was not allowed to know about it, he told the audience.

“It exists in a bureaucracy of government in a different place,” said Bamford.

Once just a small secret office in New York, the NSA now consists of 100 buildings and 32 miles of roads, Bamford said.

The agency acquired even greater power in 2001 when the Bush administration decided to bypass the Foreign Intelligence Surveillance Act (FISA) court to undertake “warrantless eavesdropping” that was “totally illegal,” he stated. Today, Bamford said, the NSA is tracking the communications of five billion people a day.

For all of its spying, however, said Bamford, the NSA “doesn’t have a very good track record.

Bamford said the NSA “feels that nobody should be able to write about it,” and that with the Snowden leaks, “you can see how apoplectic [the agency is].”

While acknowledging too much secrecy in government and agreeing that leaks by both the government itself and others has been “a daily fare” of American journalism, Schoenfeld argued that private individuals such as Snowden who decide to leak classified information are “usurping a right that properly belongs to the public” via the officials it elects into office.

“Even as we celebrate our openness, we should not lose sight of our costs,” he said, citing the potential for “grave damage” to national security.

Ackerman said he believes that the Guardian’s reporting on the NSA and Snowden leaks has been handled “responsibly and well,” and that the news outlet has been “remarkably restrained” in what it has published. Whatever one’s opinion of Snowden, he said, the public debate that has followed in the wake of his leaks is important and consequential.

As a lawyer, Schulz said, he too has been troubled by increasing legal threats to journalists covering national security issues.

“It’s a knotty question,” he remarked. “Who gets to decide what the American public needs to know?”