REDMOND, Wash. — Jill Campbell understands the bond that can exist between people and their documents.

“For some people, these documents are their lifeblood. They don’t know how to work without them,” says Campbell, a senior lead product planner for the Microsoft Business Division.

For more than two years, Campbell and her team have been working on a way to guarantee that no one ever again will have to be separated from their Microsoft Office documents.

It’s a way to share for those who don’t have SharePoint, Campbell says. It’s a way to collaborate without getting locked out of a document when someone else is editing it. It’s a way to have access to a document at all times – at work, at home, and while mobile – without e-mailing it to yourself.

“This has huge advantages when you think about what the Web is good for, which is accessing from browsers anywhere, sharing, and collaborating on documents with anyone across the world,” Campbell says. 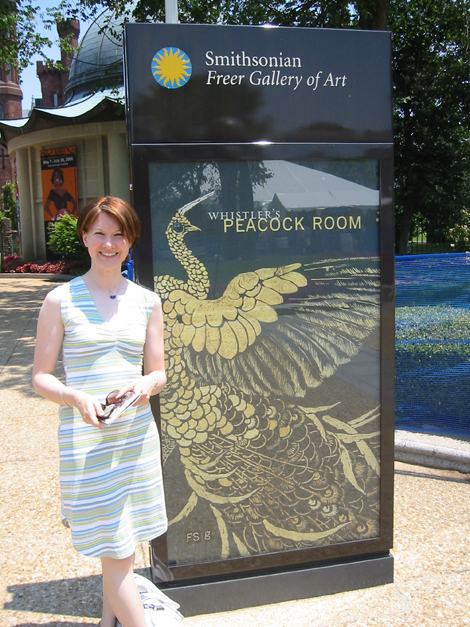 About the image above: An art history major, Jill Campbell is shown here touring  a Smithsonian exhibit in Washington ,D.C., during a recent vacation. Image credit: Microsoft.

Campbell, who will celebrate a decade at Microsoft this October, has amassed a unique flight of experiences planning for a wide range of products: Pocket PCs “back in the day, for the early wave of mobile,” Windows Longhorn (which would become Vista); Microsoft Outlook, and MSN, taking it to Japan, Australia, and Latin America.

“I think my tour of duty around the company was useful from the standpoint that it shows me how big a role tactical planning can provide across the board, everything from tiny decisions through to big initiatives,” Campbell says.

An art history major, Campbell decided to take a more broad approach to her “liberal arts tool kit” by taking a job at International Data Corporation (IDC) right out of college.

Now an athletic, pie-baking, music-loving mother-to-be, Campbell notes that Office Web Apps are part of a significant movement of Microsoft’s productivity suite of products to the cloud. She recently discussed the new releases and her career at Microsoft with Microsoft News Center.

Campbell: I really think of it as taking the Office assets and extending them into a new realm that makes them more useful to people across work and home boundaries. Really what they allow you to do is lightweight editing, sharing collaboration, and anywhere access.

If you look at what we’ve done, Office Web Apps actually fit a really nice progression of investments we’ve made. Our past investments really do lead nicely up to the idea of how to get our assets out to more people across more boundaries so they can do more.

News Center: What is the basic need that Office Web Apps meet?

Campbell: What we kept finding when we interviewed customers was that their needs covered a whole spectrum. They had something and they either needed to share it with themselves, or the world, and they didn’t have an easy mechanism to do that.

For people in the SharePoint universe, it’s easy – just put it on a SharePoint server, it’s shared. If I sit at all outside of that boundary it becomes really difficult, so everybody defaults to e-mailing things to themselves and others.

News Center: Now that Office Web Apps will provide that missing link, do you expect people to switch from the full versions of Office software?

Campbell: I don’t think so, and part of the reason I don’t think so is that there are things the Office Web Apps are really optimized for, and things they’re not. People say they want documents everywhere, and they do, but as soon as they want to do any kind of heavy editing they don’t want to be doing that on a mobile device.

The same is true with Office Web Apps. There’s a bunch of scenarios where you don’t want to be doing it in a browser, you want the full editing experience, the full power of your PC, and perhaps even a local copy.

News Center: Was developing Office Web Apps pretty straightforward, or did you have some tough issues to deal with?

Campbell: To me, the single biggest problem was where to stop. That was probably the biggest challenge – where do you draw that line and say this is lightweight editing but that’s heavyweight, this requires collaboration and that doesn’t, this is a good sharing scenario and that isn’t. You could work on something like this for infinity, so the question becomes where a good stopping point is, and when have the critical needs been met. Then everything else needs to move to the next version.

News Center: What was it like for you to work on such a high-profile part of the Office 2010 release?

Campbell: I look at the Office Web Apps and I feel very proud. I’m one tiny component of this huge effort to build these, but even thinking of myself as being a tiny component I feel really proud of what we’ve done.

News Center: So what do you do after work?

Campbell: I used to be a runner and a baker, and I am, as I think everybody would say, a reader.

News Center: Running and baking might be the most ideally matched set of hobbies ever.

Campbell: They really are. I’m in a bit of a transition right now because I’m pregnant with my first, so I spend a lot of my time being tired and a bit sick. The baking has definitely come in handy being pregnant – the running less so.

News Center: Can you explain the decorations in your office?

Campbell: I have a bulletin board of art, photography, and postcards, and I have album covers hanging on the walls. It’s an orderly profusion of color. I almost always take the time to put up a fair amount of kitschy art. Generally it’s how I work across the board. I like things to be orderly but pretty creative.

News Center: So are the photo albums chosen for their musical value?

Campbell: No, they were chosen for their album art and their 50s kitsch appeal – The Glenn Miller Orchestra, Engelbert Humperdinck, and Steno Booster, a dictation training album. There’s just something so … if you see Engelbert Humperdinck, first what a great name, and second, he’s got this sincere, well-lighted pose where he’s thinking real hard about the music he’s about to sing to you. It’s very endearing.

News Center: Please tell me you’re not thinking of naming your daughter Engelbert or Humperdinck.

Campbell: [Laughs.] I hope not.

*Special Thanks to – Microsoft