Increasing acidity in the sea’s waters may fundamentally change how nitrogen is cycled in them, say marine scientists who published their findings in this week’s issue of the journal Proceedings of the National Academy of Sciences (PNAS).

Nitrogen is one of the most important nutrients in the oceans. All organisms, from tiny microbes to blue whales, use nitrogen to make proteins and other important compounds.  Some microbes can also use different chemical forms of nitrogen as a source of energy. 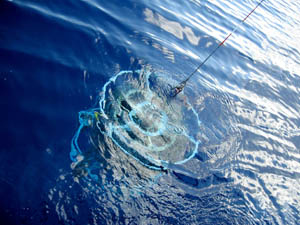 One of these groups, the ammonia oxidizers, plays a pivotal role in determining which forms of nitrogen are present in the ocean. In turn, they affect the lives of many other marine organisms.

“This report that ocean acidification decreases nitrification (the amount of nitrogen) is extremely important,” says Garrison, “because of the crucial role of the nitrogen cycle in biogeochemical processes-processes that take place throughout the oceans.”

Very little is known about how ocean acidification may affect critical microbial groups like the ammonia oxidizers, “key players in the ocean’s nitrogen cycle,” says Michael Beman of the University of Hawaii and lead author of the PNAS paper.

In six experiments spread across two oceans, Beman and colleagues looked at the response of ammonia oxidation rates to ocean acidification. 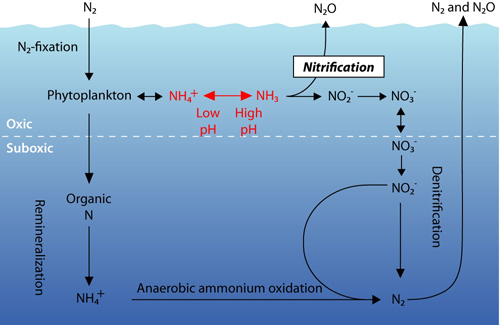 In every case where the researchers experimentally increased the amount of acidity in ocean waters, ammonia oxidation rates decreased.

These declines were remarkably similar in different regions of the ocean indicating that nitrification rates may decrease globally as the oceans acidify in coming decades, says David Hutchins of the University of Southern California, a co-author of the paper. 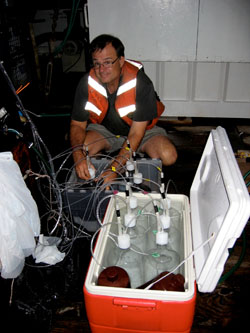 An important caveat, they say, is that nitrous oxide emissions from oceanic nitrification may be altered by other forms of global environmental change such as increased deposition of nitrogen to the ocean, or loss of oxygen in some key areas.

“That could offset any decrease due to ocean acidification, and needs to be studied in more detail,” says Hutchins.

Another major implication of the findings is equally complex, the researchers say, but just as important.

As human-derived carbon dioxide permeates the sea, ammonia-oxidizing organisms will be at a significant disadvantage in competing for ammonia. 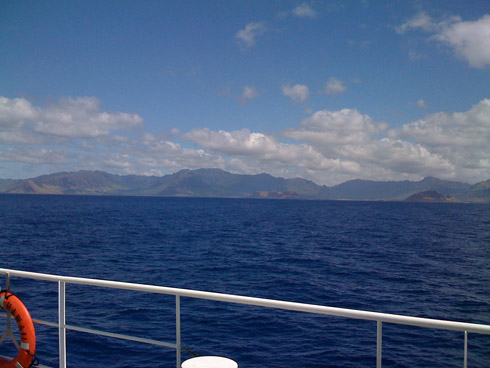 Island of Oahu, Hawaii, from the deck of the research vessel Kilo Moana, used in the study. Image credit: Michael Beman

Over time, that would shift the available form of dissolved nitrogen in the surface oceans away from forms like nitrate that are produced by nitrification, and toward regenerated ammonium.

With a decrease in average ocean pH from 8.1 to 8.0 (greater acidity), the scientists estimate that up to 25 percent of the ocean’s primary production could shift from nitrate- to ammonium-supported.

The consequences of such a shift are not easily predicted, says Hutchins, but would likely favor certain drifting, microscopic plant species over others, with cascading effects throughout marine food webs.

“What makes ocean acidification such a challenging scientific and societal issue is that we’re engaged in a global, unreplicated experiment,” says Beman, “one that’s difficult to study–and has many unknown consequences.”

Other co-authors of the PNAS paper are: Cheryl-Emiliane Chow, Andrew King, Yuanyuan Feng and Jed Fuhrman of the University of Southern California; Andreas Andersson and Nicholas Bates of the Bermuda Institute of Ocean Sciences; and Brian Popp of the University of Hawaii.