Obesity: Yale Researcher Explains Why It’s All in Our Heads 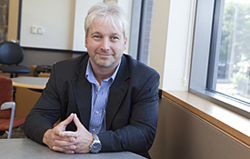 Tamas Horvath is the first to tell you that he doesn’t study obesity. But his research on the effects of metabolism on higher brain functions could provide deeper understanding of the brain’s link to appetite, weight and to metabolic disorders such as diabetes and obesity.

His lab was the first to provide evidence that the brain uses fat as fuel. Horvath has also studied how endocrine signals in the brain regulate neurodegenerative diseases such as Parkinson’s and Alzheimer’s.

Horvath followed his father and grandfather into veterinary medicine in his native Hungary, but his training sparked a passion for basic research. His achievements have earned him a long title that speaks to his varied research interests. He became chair of the Department of Comparative Medicine at Yale School of Medicine in 2005, and he is also a professor in the Departments of Obstetrics, Gynecology & Reproductive Sciences and Neurobiology. Horvath also heads the Program on Integrative Cell Signaling and the Neurobiology of Metabolism.

His increasing administrative responsibilities have not slowed down his research. He recently received a 2010 Pioneer Award from the National Institutes of Health, given annually to scientists conducting innovative and groundbreaking research.

The Yale Daily Bulletin recently asked Horvath about his multiple research interests, which could eventually lead to a way to manage obesity and other disorders that plague so many.

What is “comparative medicine”?

Comparative medicine programs began emerging at various academic institutions in the 1960s to provide intellectual and translational support for academicians who used animals to enhance understanding of the human condition.

The idea was that veterinarians, through their training and experience with multiple species, have a potentially more realistic ability to correlate findings in an animal species to primates, including humans. Eventually, their research focus was directed to infectious disease. We began to broaden the research spectrum in 2005 to bring the direction of the Department of Comparative Medicine more in line with the medical school’s research mission in translational biomedicine.

How did your training as a veterinarian lead you to your current work in the Departments of Obstetrics & Gynecology and Neurobiology?

I came here as a freshly graduated veterinarian. However, my work has evolved to include more attention to basic research and mechanisms of human diseases expressed in animal models.

My main area of interest and expertise is in the neuroendocrinology of hunger, cell- and whole body-energy metabolism. I am fascinated by the lack of understanding of how peripheral tissues, such as the liver, pancreas and muscle, control higher brain functions and vice versa. In the future, more emphasis will be placed on mechanisms that explain how cells in various tissues use nutrients, which, in turn, determine health and longevity.

With these goals, we have launched a program at Yale called Integrative Cell Signaling and Neurobiology of Metabolism. This interdisciplinary program, while initiated in the Department of Comparative Medicine, includes investigators from different departments focusing on research stemming from biochemistry, molecular biology, physiology, pharmacology and human brain imaging.

Your past research has shown that environmental factors, changes in the way genes are expressed and time spent in the womb may all play a role in developing obesity. How do these factors impact obesity and which plays the biggest role?

We are interested in how brain circuits are organized and governed by various inputs to regulate behavior and whole body physiology. We happen to study a specific circuitry in the hypothalamus that governs feeding behavior and fat. Thus, indirectly our work has implications for metabolic disorders, such as obesity and type 2 diabetes. But it is clear that the formation of this circuit during development is under the influence of both genetic and environmental factors.

In addition, since this brain circuitry remains and has to remain plastic during adulthood as well, many environmental factors will continue to affect the overall activity and output of these brain areas throughout life. At the same time, it is currently impossible to tell whether genetic background or the environment has the most impact. It will likely vary among individuals.

Why do we continue to eat when we’ve had enough?

The day-to-day fluctuation in feeding is a process that is highly responsive to how much food you take in and how much energy you really need. It is a very precisely controlled machine. The type of food you eat shifts this finely tuned machine up or down. The brain emerged to support all the peripheral tissue and to take in excess energy to prepare for a time of scarcity.

The base or default wiring of our brain is to be interested in food. That makes perfect sense from the perspective of survival because in the absence of such an arrangement, we would die soon after birth. On the other hand, at prolonged periods of plentiful available food, a period we have had over multiple decades, this default behavior can become a problem.

How does estrogen affect appetite?

In most studies, both in animals and humans, estrogen was shown to suppress appetite and promote fat burning. The best illustration of the role of estrogen in metabolism is the shift of whole body metabolism in women during menopause. Diminishing estrogen levels promotes redistribution of the fat stores from just below the skin to the deeper layers between internal organs and beneath muscles.

How does the appetite-stimulating hormone ghrelin affect mental sharpness?

Depending on your metabolic state, your cognitive functions fluctuate. This is a truism everyone has experienced. The idea that peripheral signals such as ghrelin affect learning and memory is not surprising. In fact, it is reasonable to argue that the more complex the brain, the more successful it is in promoting hunger and associated behaviors.

One could say that in fact it is the primary function of all brain areas to support hunger-associated behaviors because that is the key to survival. That our brain has been used for many other activities, such as the execution of this Q&A, could actually be viewed as a byproduct of the original “intent.” Ignoring these very primitive aspects of our existence for issues relating “higher brain functions” is not only unfortunate, but it has contributed, in my view, to the sluggish progress in many types of brain disorders, including neurodegenerative disorders, dementias, schizophrenia and depression.

Your most recent findings show that interfering with the brain pathway responsible for appetite could cut down on longevity. How could this affect the view on diet drugs?

Our data in past years has consistently shown that in order to promote satiety, or suppress appetite, the body utilizes a large amount of reactive oxygene species, byproducts of fuel oxidation that can damage cells and lead to accelerated aging. It is reasonable to conclude that if you successfully suppress appetite using diet drugs, you will accomplish weight loss, but that there will be an overall shortening of life if these drugs are used for a long time.