University biologists have found a new molecule in fruit flies that is key to the information exchange needed to build wings properly. They have also uncovered evidence that an analogous protein may exist in people and may be associated with problems such as cleft lip, or premature ovarian failure.

PROVIDENCE, R.I. [Brown University] — As they work together to form body parts, cells in developing organisms communicate like workers at a construction site. The discovery of a new signaling molecule in flies by Brown University biologists not only helps explain how cells send many long-haul messages, but also provides new clues for researchers who study how human development goes awry, for instance in cases of cleft lip and palate.

For all the diversity of life, animal cells employ only a small set of proteins to send those jobsite signals that coordinate construction. For that reason, said Kristi Wharton, associate professor of molecular biology, cell biology and biochemistry, studying these proteins and pathways in fruit flies can allow biologists and physicians to explain how development and other cellular processes occur in a wide variety of creatures and tissues. 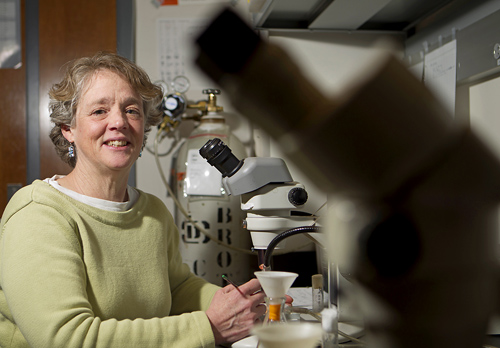 In humans a key family of the signaling molecules that convey such messages are bone morphogenic proteins (BMPs). In fruit flies the directly analagous proteins carry the name “glass-bottom boat” (Gbb), because a mutant form makes larvae appear clear instead of milky white. To date, the conventional wisdom has been that signaling comes from a fly form of BMP known as Gbb15.

“The thought for the longest time is that this smaller protein is the only product that is formed and important for signaling,” Wharton said. “But we found another form of this signaling molecule that was not previously known.”

Wharton and former postdoctoral fellow Takuya Akiyama introduce the new molecule, Gbb38, in the April 3 edition of the journal Science Signaling. Experiments showed that in tissues where it was abundant, particularly parts of the wing, Gbb38 proved responsible for more signaling activity than Gbb15, and appeared especially important for carrying long-haul signals.

In addition to the findings in flies, Akiyama found that mutations in the genes for making BMPs in humans that directly mirror the genetic code for making Gbb38 in flies, occur in people with cleft lip (with or without cleft palate), and the reproductive disorders premature ovarian failure and persistent Mullerian duct syndrome. In other words, a mutation that interrupts Gbb38 production in flies, is analogous to the mutations associated with developmental disorders in different tissues in people.

The genetic analysis doesn’t prove that mutations that hinder the production of an analogous signaling protein in humans would be the cause of those diseases, Wharton said. In fact, a longer-form BMP like Gbb38 has yet to be discovered in people. But the new discovery at least suggests the need for research to investigate that link, perhaps first in mice, she said.

Another potential benefit of the finding, she said, is that finding a Gbb38 analogue in humans could improve the current use of BMPs as therapeutics for bone repair, spinal fusions, and reconstruction of maxillofacial bone defects.

“If large forms of human BMPs are indeed present, which is suggested by the three human mutations, then they could be a very useful alternatives to the short BMPs because the large forms are more active in terms of signaling and have different properties in vivo,” Wharton said.

Discovery on the wing

In the new paper, aided by an antibody provided by second author Guillermo Marques of the University of Alabama, Akiyama and Wharton were able to discover Gbb38 because they first asked what happened when they interrupted the creation of Gbb15. When they did that, by mutating the genetic instructions that tell enzymes where to cut Gbb15 out of a longer protein, they noticed that signaling activity was only mildly reduced instead of completely gone as conventional wisdom would have predicted.

Further research showed that there was another place where enzymes could cut to make a protein. Cutting at that spot yielded the longer Gbb38 protein. When they interrupted that cleavage in flies, the researchers found that signaling was significantly hindered. A total reduction in signaling came from interrupting both Gbb15 and Gbb38.

“The small protein doesn’t move very far across the tissue,” Wharton said. “But we found the large protein has a very long range. That may provide one answer to the long-standing question about what regulates the range of these signaling molecules.”

The view for developmental biologists, therefore, may indeed be clearer in a larger glass-bottom boat.

The National Institute of General Medical Sciences funded the research.