In ancient Earth history, the sun burned as much as 30 percent dimmer than it does now. Theoretically that should have encased the planet in ice, but there is geologic evidence for rivers and ocean sediments between 2 billion and 4 billion years ago.

Scientists have speculated that temperatures warm enough to maintain liquid water were the result of a much thicker atmosphere, high concentrations of greenhouse gases or a combination of the two.

Now University of Washington researchers, using evidence from fossilized raindrop impressions from 2.7 billion years ago to deduce atmospheric pressure at the time, have demonstrated that an abundance of greenhouse gases most likely caused the warm temperatures.

Their work, which has implications for the search for life on other planets, is published March 28 in Nature.

“Because the sun was so much fainter back then, if the atmosphere was the same as it is today the Earth should have been frozen,” said lead author Sanjoy Som, a postdoctoral researcher at NASA’s Ames Research Center, Mountain View, Calif., who conducted the research as part of his UW doctoral work in Earth and space sciences.

He and his coauthors – David Catling and Roger Buick of UW Earth and space sciences; Jelte Harnmeijer, a UW graduate now at the Edinburgh Centre for Low Carbon Innovation in Scotland; and Peter Polivka, a UW graduate student in civil engineering – set out to determine how the ancient atmosphere differed from that of today. 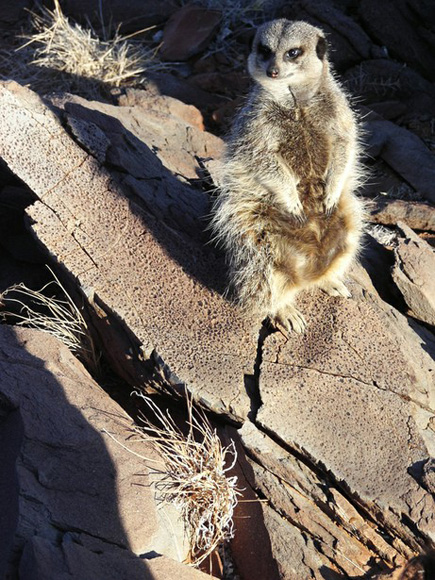 A meerkat perches atop rocks bearing the fossil impressions of raindrops that fell in South Africa 2.7 billion years ago. Image credit: Wlady Altermann/University of Pretoria

Knowing the atmospheric pressure of a given period can help scientists understand in better detail the overall nature of the atmosphere at that time. For example, substantially higher pressure would be needed for a phenomenon called “pressure broadening,” which allows existing greenhouse gases to absorb more radiation and warm the planet. That has been speculated as a reason for the warmer conditions on ancient Earth.

But precise measurements of atmospheric pressure date only from the invention of the barometer in 1644. The new work allowed the scientists to determine limits of ancient air pressure by comparing raindrop impressions from today with the fossilized impressions from a time when there were no plants or animals on Earth but the planet was teeming with microbes.

The sizes of raindrop impressions depend on raindrop velocity, the atmospheric pressure and the composition of material into which the raindrops fall. Previous research has shown that at Earth’s surface raindrops won’t exceed a little more than a one-quarter inch in diameter. That also is the largest a raindrop could have been to create the largest fossilized impressions, regardless of the atmospheric pressure.

Those large raindrops in today’s atmosphere fall at about 30 feet per second, but if the ancient atmosphere was thicker that speed would have been lower and the maximum size of imprints left behind would be smaller.

Meanwhile, to get a measure of raindrop impressions under present-day atmospheric pressure, Som and Polivka used a pipette to release varying sizes of water drops down an open stairwell into recent volcanic ash collected from Hawaii and Iceland, held in a tray nearly 90 feet below. The ash was of similar composition to the rock in which the fossilized raindrop imprints were found. The scientists used liquid plastic and hair spray to harden the impressions, which then were scanned with lasers and the scans compared to the impressions from South Africa.

In comparing the raindrop impressions, Som determined that, if the biggest imprints were formed by the largest raindrops, the atmospheric pressure 2.7 billion years ago could have been no more than twice what it is today. But the largest possible raindrops are extremely rare, he said, so it is very likely that the pressure was the same, or even lower, than it is today. That would favor a buildup of greenhouse gases in the atmosphere to explain a warmer Earth, rather than the effect of pressure broadening.

Som, who earned a master’s degree in aeronautics and astronautics before switching his emphasis to Earth and space sciences in the UW’s astrobiology program, said the finding could prove important in the search for life on planets orbiting other stars, called exoplanets. That’s because the Earth of 2.7 billion years ago was very different from what we know today, and yet it too supported abundant life in the form of microbes.

“Setting limits on atmospheric pressure is the first step towards understanding what the atmospheric composition was then. Knowing this will double the known data points that we have for comparison to exoplanets that might support life,” he said.

“Today’s Earth and the ancient Earth are like two different planets,” he said.

The research was funded by NASA, the UW Department of Earth and Space Sciences and the European Commission’s Coordination Action for Research Activities on Life in Extreme Environments.