Beta oscillations are tightly linked to Parkinson’s disease and the ability to process sensory information, such as touch. Two neuroscientists have brought their collaboration to Brown University and won funding from the National Science Foundation to see if they can finally provide a definitive, if unorthodox, explanation for beta brainwaves.

Before she could seek to convince the world that her computer model of a key brain circuit explains a fundamental, 80-year-old mystery of neuroscience with potential relevance to Parkinson’s disease, Stephanie Jones sought to convince Christopher Moore. The new Brown neuroscience professors are now close collaborators, but when they first started talking about the beta oscillations of the cortex, Moore thought Jones was plain wrong, if not a bit nuts.

“I was a complete non-believer,” he said. “I told her I didn’t think this idea could be right.” 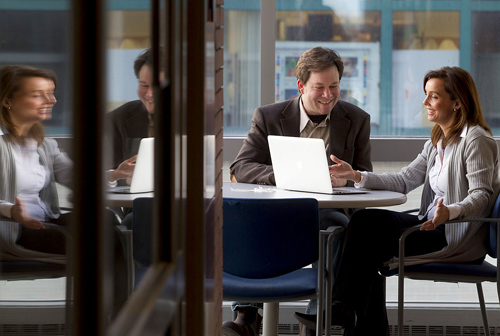 Strong collaboration; bumpy start. Stephanie Jones thought her computer model could explain the origin of beta oscillations in the brain. Christopher Moore, who studied the physical brain, thought she was flat-out wrong. They now have a common hypothesis and NSF funding to test it. Credit: Mike Cohea/Brown University

What Jones and Moore now agree upon — and will seek to prove with an $830,000 National Science Foundation grant awarded this month — is that neurons in the cortex experience beta oscillations (cycles of activity at a rate of about 20 times a second) when they receive a combination of two input signals in just the right two places at the right time and with the right strength. The signals, they believe, originate from the distant basal ganglia and reach the cortex by way of the thalamus.

The research sounds arcane and technical, but these beta oscillations are powerful and meaningful phenomena that have eluded explanation since they were first detected nearly a century ago. Abnormally strong beta oscillations in the cortex are directly associated with Parkinson’s disease. The waves seem to increase as we age, even in healthy people. And when the region of the brain that processes the sense of touch, say in the fingers, is overwhelmed by beta oscillations, the processing doesn’t happen.

“If you have the beta rhythm in the sensory cortex, our data strongly suggest you will fail at a perceptual task,” Moore said, recalling a past human experiment. “You can be sitting here and you tell me you are trying, I know you are trying, you are pushing buttons just like you are trying, but if your cortex happens to show beta right when I tap your finger, you are not going to feel it.” 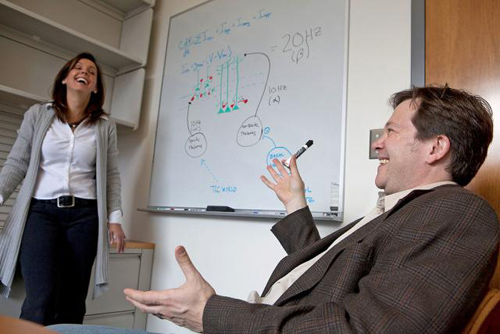 So. Will the hypothesis be confirmed? Now at Brown, Jones and Moore have new weapons in their research arsenal. Brown’s computing resources will let Jones expand and refine her model. Optogenetics will let Moore turn brain circuitry on or off. Credit: Mike Cohea/Brown University

Finding an accurate explanation of beta oscillations might not only help explain why the brain’s perceptual circuits are wired the way they are, but could also provide doctors with a rational means for improving deep-brain stimulation treatments for Parkinson’s disease — and maybe obsessive compulsive disorder — where they apply electrical current to parts of the brain that Moore and Jones suspect of relaying beta signals.

“You’d have a mechanistic understanding of why that change [from stimulation] created that change in the circuit,” Jones said.

One day at lunch …

The two launched their discussion a few years ago in the cafeteria at Massachusetts General Hospital when Moore, then at the Massachusetts Institute of Technology, and Jones, then at the hospital, realized that the circuits he studied in the physical brain were the very ones she modeled in a computer. In particular they shared an interest in a touch-perception circuit, technically known as a “thalamocortical circuit in the somatosensory system.”

After they began to collaborate, Jones shared that her computational model suggested human data on beta oscillations could best be produced by a delivering a two-signal trigger to neurons in the circuit. One signal comes in at the far end of a neuron where the cell’s long branches, or dendrites, extend out. The other, she said, would have to come in at the base of that tree-like structure, where the dendrite extends out from the cell.

Moore had his doubts but experiments began to show indeed that Jones’s model, which simulated a circuit of about 300 cells of about five types, predicted what he could observe in real animal brains. In 2009 and 2010 the two began to publish together in the Journal of Neurocience, the Journal of Neurophysiology, and Neuroimage. All the while they puzzled over where these beta-stimulating, two-factor signals could be coming from. Eventually they traced them, at least hypothetically, back to the “non-specific” area of the thalamus and farther back to the basal ganglia.

At Brown for the big moment

Although each researcher maintains other collaborations, they jumped at the chance to come to Brown last summer. Here they said can collaborate without crossing any bridges and they have access to Brown’s computing resources, which can allow Jones’s model to expand and run faster.

The groundwork of their hypothesis, their increasingly close collaboration, and their access to resources made their first grant application at Brown a success. Now all they have to do is find out if they are right or wrong.

As they have always done, Moore will lead the physiological side of things. He’ll use optogenetics, a new technology in which scientists engineer brain cells to be turned on or off by flashes of light, to take over the circuits of mice from the basal ganglia to the cortex. He’ll be able to see whether turning off particular cells in the basal ganglia, for example, causes beta oscillations in the somatosensory cortex to stop, as the hypothesis and the model would suggest.

Meanwhile, Jones will expand the model to incorporate those upstream parts of the brain, the basal ganglia and the thalamus, so that it is more complete. She plans to feed what Moore sees in his experimental results back into the model to refine it as well.

The grant runs through the end of October 2014, which should be enough time for Moore and Jones to find out whether they have traced beta oscillations to their neural roots.

Moore simultaneously discounts and revels in speculation about what the hypothesis would say about the brain if it is indeed true. Does the basal ganglia, which is implicated in habit formation, use beta oscillations to briefly shut down sensory processing in the cortex so that it can focus the brain on that task of forming habits — which is why Jones wonders whether it could also relate to OCD? If he took control of the beta oscillations in a mouse, could he give the mouse Parkinsonian symptoms and then turn them off at will?

For now the implications will have to wait for the more basic step of confirming the hypothesis. Like the beta oscillations themselves, the hypothesis may only come to fruition through a perfect combination of researchers coming together at Brown with perfect timing.