Scientists from the Woods Hole Oceanographic Institution (WHOI) have conducted a new study to measure levels of carbon at various depths in the Arctic Ocean. The study, recently published in the journal Biogeosciences, provides data that will help researchers better understand the Arctic Ocean’s carbon cycle—the pathway through which carbon enters and is used by the marine ecosystem. It will also offer an important point of reference for determining how those levels of carbon change over time, and how the ecosystem responds to rising global temperatures.

“Carbon is the currency of life. Where carbon is coming from, which organisms are using it, how they’re giving off carbon themselves—these things say a lot about how an ocean ecosystem works,” says David Griffith, the lead author on the study. “If warming temperatures perturb the Arctic Ocean, the way that carbon cycles through that system may change.”

Griffith’s team sampled suspended particles of organic matter, as well as organic carbon and carbon dioxide (CO2) dissolved into the surrounding water. This is the first time that researchers have focused broadly on measuring multiple types of carbon at the same time and place in the Arctic Ocean—due to its remote location and the challenges of operating in sea ice, few comprehensive carbon surveys had been conducted there before this study.

Griffith and his colleagues conducted their fieldwork in 2008 aboard the Canadian Coast Guard icebreaker Louis S. St. Laurent. At two different spots in the Canada Basin, an area northwest of the Canadian coast, they gathered samples from 24 depths ranging from the surface to the ocean floor 3800 meters (roughly 12,500 feet) below. 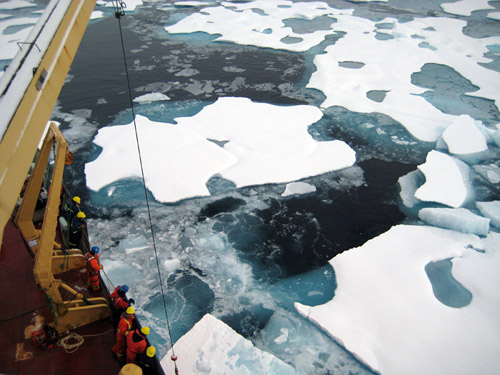 Griffith and his colleagues conducted their fieldwork in 2008 aboard the Canadian Coast Guard icebreaker Louis S. St. Laurent. At two different spots in the Canada Basin, an area northwest of the Canadian coast, they gathered samples from 24 depths ranging from the surface to the ocean floor 3800 meters (roughly 12,500 feet) below. (Image credit: David Griffith, Woods Hole Oceanographic Institution)

Collecting samples at those intervals was necessary, Griffith says, because the Arctic Ocean is separated into distinct layers, each with its own unique carbon characteristics. At the surface is a freshwater layer from river runoff and sea-ice melt. Below that is a layer of cold water from the Pacific, and below that is a warm, salty Atlantic layer. The deepest layer is slowly replaced by mixing with overlying Atlantic water.

Measuring the different amounts of carbon in each layer (and determining its source) is an essential step in understanding the flow of carbon through the marine ecosystem, says Griffith: “It’s kind of like understanding how freight and people move in a city. If you don’t know what’s coming in and out, it’s really hard to understand how the city works.”

To analyze the contents of his samples, Griffith turned to Ann McNichol, a WHOI senior researcher and staff chemist. At WHOI’s National Ocean Sciences Accelerator Mass Spectrometer Facility (NOSAMS), she tallied the total number of carbon atoms in each specimen, including carbon-13, a stable isotope of the element. McNichol says that it can be used to determine where a particular pool of carbon originated, and how it may have been utilized by the marine ecosystem. 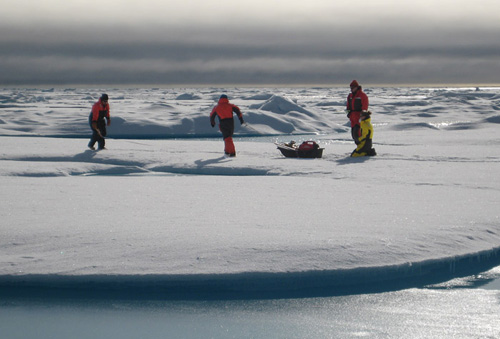 The research team sampling ice and snow from an ice flow in the Canada Basin. In addition to understanding the basic carbon cycle in the Arctic Ocean, Griffith’s team hopes that the results of this baseline study will help evaluate how Arctic Ocean carbon levels and global climate interact. (Image credit: David Griffith, Woods Hole Oceanographic Institution)

In addition to understanding the basic carbon cycle in the Arctic Ocean, Griffith’s team hopes that the results of this baseline study will help evaluate how Arctic Ocean carbon levels and global climate interact. Griffith says there are several ways this could happen.

As the Arctic gradually warms, it may cause a more intense precipitation cycle over northern Canada, Alaska, and Siberia, generating more rainfall each year. This in turn would cause more runoff from melting permafrost and eroded soil—both rich sources of organic carbon.

One possible outcome of that scenario could be an increase of carbon dioxide in the region. As bacteria in Arctic Ocean use the new influx of carbon as a food source, they may create CO2 as a byproduct. A second possibility, Griffith posits, is that warming temperatures and melting sea ice might boost the production of phytoplankton, tiny plant-like organisms that live near the ocean’s surface and thrive on carbon dioxide in the water. As those phytoplankton die (or are eaten by other organisms and released as waste), they would sink to the sea floor, causing the carbon in their bodies to be sequestered in thick sediments—effectively removing the increased carbon from the environment.

“Those are just a few aspects of what might happen. But for every one that we think about, there could be 10 others that drive the system in a different direction,” says Griffith. “We don’t yet have the kind of data to say anything definitive about how the Arctic would be affected by warming climate—but what we do have is a very important baseline of data to help evaluate changes that will happen in the future. Without that, you‘re unfortunately just guessing at how things change over time.” 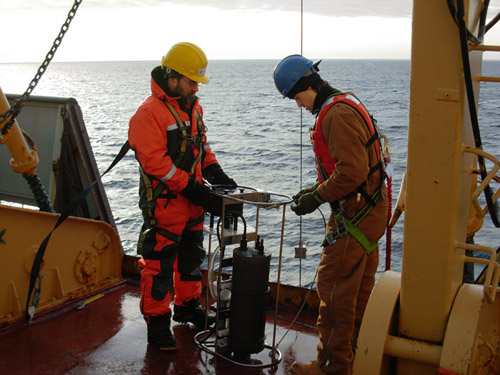 Mike Dempsey (left) of the Canadian Institute of Ocean Sciences and David Griffith recover one of the pumps that were used to collect samples. The team sampled suspended particles of organic matter, as well as organic carbon and carbon dioxide dissolved into the surrounding water. (Image credit: Rick Krishfield, Woods Hole Oceanographic Institution)

Also collaborating on the study were WHOI geochemist Li Xu, Fiona McLaughlin and Robie Macdonald of the Institute of Ocean Sciences, Fisheries and Oceans Canada, Kristina Brown of the University of British Columbia, and Timothy Eglinton of the Swiss Federal Institute of Technology.

This research was funded by the WHOI Arctic Research Initiative, Fisheries and Oceans Canada, the Canadian International Polar Year Office, and the U.S. National Science Foundation.