A UA study has found poverty, water scarcity, food insecurity and interdependence between the United States and Mexico along the border.

The U.S.-Mexico border is the border in the world with the greatest disparity in access to food and water needed for human survival, according to a report commissioned and published by the Southwest Center at the University of Arizona.

An endowment from the Kellogg Foundation and a UA Confluencenter for Creative Inquiry grant supported the study and its focus on assessing transborder food systems to understand water scarcity and food insecurity within the borderlands region.

The report underscores how in the globalized economy, Arizona and the rest of the United States rely on the skilled labor, water, fresh produce, fish, shellfish and livestock originating in northern Mexico; while in Mexico, the population is increasingly dependent upon frozen and processed foods originating in the United States.

Yet, according to the researchers, the food and water security policies of these two nations seldom factor in how natural or manmade disruptions in the production, processing and transport of food from one side of the border effects the health and vulnerability to hunger of millions of people on the other side of the boundary.

The 65-page report, “Hungry for Change: Borderlands Food and Water in the Balance,” was released in August to stimulate civil public discourse in advance of the Border Food Summit to be held Sept. 16-18 at the Esplendor Resort in Rio Rico, Ariz. 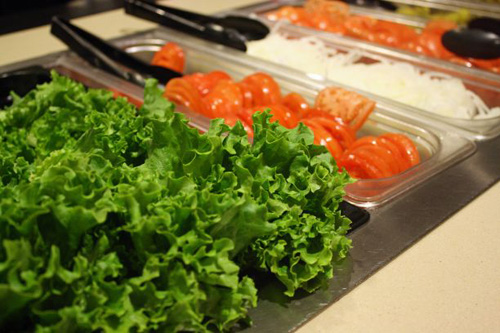 The U.S. and Mexico are dependent upon each other when it comes to food production, processing and transportation. (Photo by Beatriz Verdugo/UANews)

The report includes contributors, 16 in all, recruited from non-profit agencies or research centers in Sonora, Mexico, Nicaragua, New Mexico, Texas, California, Colorado, Oregon and Minnesota with the input from six departments at the UA and other Tucson-based organizations. The contributors captured the perspectives of consumers, farmers, ranchers, fishermen, aquaculturists, teachers, truckers, community-health workers and customs agents in the seven U.S. and Mexican border states.

Gary Nabhan, the W.K. Kellogg Foundation Endowed Chair in Southwest Borderlands Food and Water Security at the UA’s Southwest Center, said, “The principal focus of the publication is how the Greater Sonoran Desert functions as a single binational, multi-cultural foodshed, in how it feeds some populations while others are placed at risk. There is no simple correlation between how much food a border state produces and how many of its children escape poverty and hunger – that’s why we wanted to look at the problems as well as the grassroots solutions developing at every point in the food chain.”

Nabhan said the report includes important contributions to the understanding of the impact of a recent drought hitting all northern Mexican states, the impact of the February 2011 freezes on fresh produce and wild food resources, and the entangled politics of free-trade, transnational grocery chains and transboundary water flows.

Reflecting on several years of research in the Mexican countryside and the flow of foods into packing and brokers’ shipping houses in Nogales, Ariz., Jeffrey M. Banister, assistant research social scientist at the Southwest Center and the school of geography and development, said, “It is nearly impossible to talk about agricultural production and consumption in either Mexico or the United States as an isolated or discrete processes. Our need to eat ties us together, just as it does environments and the forces shaping them. The result of our research, the ‘Hungry for Change’ report, challenges the borders – political, cultural, economic – that impede food security and provides a richly detailed analysis of their effects on our ability to eat well.”

Among the new findings found in “Hungry for Change” are:

Said Maribel Alvarez, associate research social scientist and associate research professor at the Southwest Center and the UA department of English: “When we ignore the ways that our tomatoes, bell peppers and melons entangle us with our neighbors, we are also ignoring the ways in which our stories, affections, memories and identities also overlap. There is a grassroots movement afoot to bring to light these dynamics and to hopefully create change in the future of our shared food system.”