On The Front Lines

The extent of sea ice in the Arctic has reached a record low, according to data released Aug. 26 by the U.S. National Snow and Ice Data Center (NSIDC).

A University of Delaware marine scientist can confirm some of that ice loss firsthand. In a short video he produced, Andreas Muenchow, aboard the Canadian icebreaker Henry Larsen, shows the ice-free sea off Petermann Fjord that he and his colleagues were sailing in — an area that for ages had been covered by floating ice shelves.

The extent of sea ice in the Arctic has reached a record low, according to the National Snow and Ice Data Center. A UD marine scientist can confirm some of that ice loss firsthand. Video by Andreas Muenchow and Allison Einolf aboard CCGS Henry Larsen; edited by Andrea Boyle

“But it is no more,” notes Muenchow in the video. He and his research team from UD’s College of Earth, Ocean, and Environment were working in Nares Strait, between Greenland and Canada, to recover an ocean and sea ice observing array they had moored there in 2009 as part of his National Science Foundation research project.

“What we see in Nares Strait is some of the hardest and thickest ice leaving the Arctic where some of it is replaced by much thinner ice that has not been hardened by many sequential freeze/melt cycles,” Muenchow says. “The harder thicker ice is called ‘multi-year’ ice, distinct from first-year ice, and the slow disappearance of this multi-year ice from northern Canada and Greenland is one major factor causing the ice extent to become steadily smaller over the last 40 years or so. Most climate models predicted this scenario, but we are 30 to 40 years ahead of the predicted schedule with regard to the ice cover in the Arctic.” 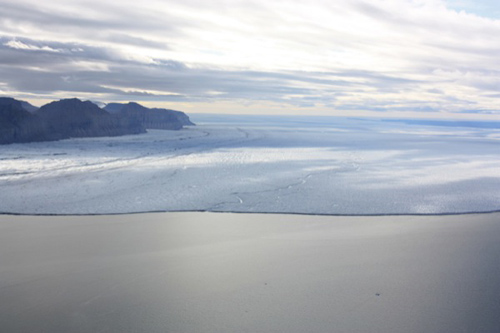 During his Arctic research mission, Muenchow observed firsthand Petermann Glacier and the giant ice island, twice the size of Manhattan, that broke off from the glacier on July 16, which he reported in his “Icy Seas” blog.

On Aug. 24, Muenchow, an associate professor in CEOE’s School of Marine Science and Policy, blogged that a large ice island about 10 square kilometers (4 square miles) — about three times the size of Central Park — had broken off from nearby Steensby Gletscher. 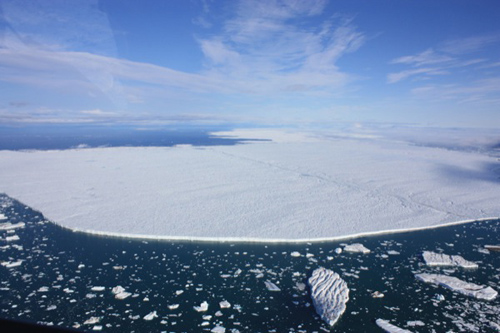 The instruments recovered by Muenchow and his research team will provide data on ocean currents, temperature, salinity and ice thickness at better than hourly intervals since 2009, including the passage of the ice island equivalent to four times the size of Manhattan that broke off Petermann Glacier in 2010. 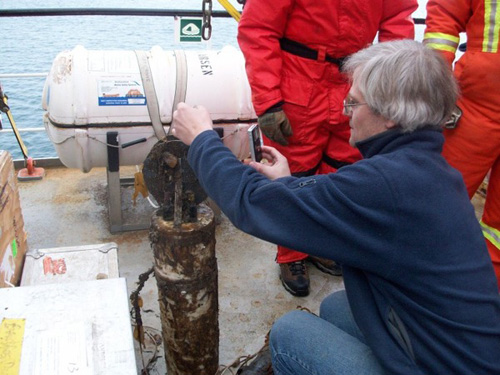