The discovery of what is essentially a 3D version of graphene – the 2D sheets of carbon through which electrons race at many times the speed at which they move through silicon – promises exciting new things to come for the high-tech industry, including much faster transistors and far more compact hard drives. A collaboration of researchers at the U.S Department of Energy (DOE)’s Lawrence Berkeley National Laboratory (Berkeley Lab) has discovered that sodium bismuthide can exist as a form of quantum matter called a three-dimensional topological Dirac semi-metal (3DTDS). This is the first experimental confirmation of 3D Dirac fermions in the interior or bulk of a material, a novel state that was only recently proposed by theorists.

“A 3DTDS is a natural three-dimensional counterpart to graphene with similar or even better electron mobility and velocity,” says Yulin Chen, a physicist from the University of Oxford who led this study working with Berkeley Lab’s Advanced Light Source (ALS) . “Because of its 3D Dirac fermions in the bulk, a 3DTDS also features intriguing non-saturating linear magnetoresistance that can be orders of magnitude higher than the materials now used in hard drives, and it opens the door to more efficient optical sensors.” 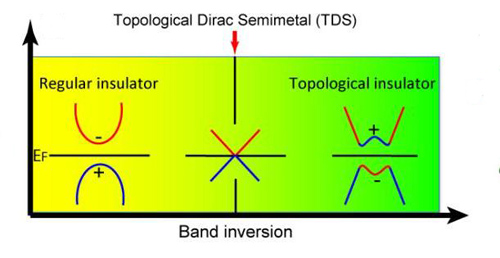 A topological Dirac semi-metal state is realized at the critical point in the phase transition from a normal insulator to a topological insulator. The + and – signs denote the even and odd parity of the energy bands. Image credit: Berkeley Lab

Two of the most exciting new materials in the world of high technology today are graphene and topological insulators, crystalline materials that are electrically insulating in the bulk but conducting on the surface. Both feature 2D Dirac fermions (fermions that aren’t their own antiparticle), which give rise to extraordinary and highly coveted physical properties. Topological insulators also possess a unique electronic structure, in which bulk electrons behave like those in an insulator while surface electrons behave like those in graphene. 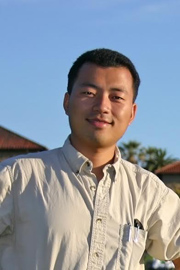 “The swift development of graphene and topological insulators has raised questions as to whether there are 3D counterparts and other materials with unusual topology in their electronic structure,” says Chen. “Our discovery answers both questions. In the sodium bismuthide we studied, the bulk conduction and valence bands touch only at discrete points and disperse linearly along all three momentum directions to form bulk 3D Dirac fermions. Furthermore, the topology of a 3DTSD electronic structure is also as unique as those of topological insulators.”

The discovery was made at the Advanced Light Source (ALS), a DOE national user facility housed at Berkeley Lab, using beamline 10.0.1, which is optimized for electron structure studies. The collaborating research team first developed a special procedure to properly synthesize and transport the sodium bismuthide, a semi-metal compound identified as a strong 3DTDS candidate by co-authors Fang and Dai, theorists with the Chinese Academy of Sciences.

At ALS beamline 10.0.1, the collaborators determined the electronic structure of their material using Angle-Resolved Photoemission Spectroscopy (ARPES), in which x-rays striking a material surface or interface cause the photoemission of electrons at angles and kinetic energies that can be measured to obtain a detailed electronic spectrum.

“ALS beamline 10.0.1 is perfect for exploring new materials, as it has a unique capability whereby the analyzer is moved rather than the sample for the ARPES measurement scans,” Chen says. “This made our work much easier as the cleaved sample surface of our material sometimes has multiple facets, which makes the rotating-sample measurement schemes typically employed for ARPES  measurements difficult to carry out.” 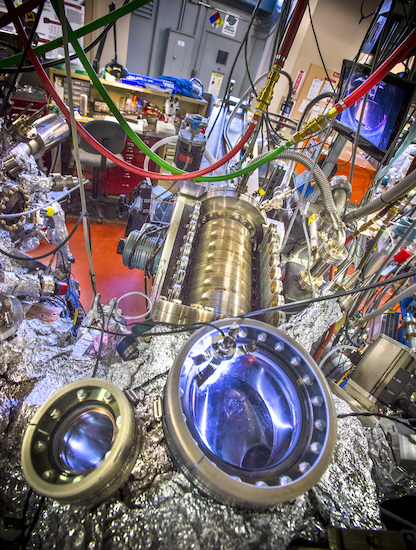 Beamline 10.0.1 at Berkeley Lab’s Advanced Light Source is optimized for the study of for electron structures and correlated electron systems. Photo by Roy Kaltschmidt

Sodium bismuthide is too unstable to be used in devices without proper packaging, but it triggers the exploration for the development of other 3DTDS materials more suitable for everyday devices, a search that is already underway. Sodium bismuthide can also be used to demonstrate potential applications of 3DTDS systems, which offer some distinct advantages over graphene.

“A 3DTDS system could provide a significant improvement in efficiency in many applications over graphene because of its 3D volume,” Chen says. “Also, preparing large-size atomically thin single domain graphene films is still a challenge. It could be easier to fabricate graphene-type devices for a wider range of applications from 3DTDS systems.”

In addition, Chen says, a 3DTDS system also opens the door to other novel physical properties, such as giant diamagnetism that diverges when energy approaches the 3D Dirac point, quantum magnetoresistance in the bulk, unique Landau level structures under strong magnetic fields, and oscillating quantum spin Hall effects. All of these novel properties can be a boon for future electronic technologies. Future 3DTDS systems can also serve as an ideal platform for applications in spintronics.

This research was supported by the DOE Office of Science and by the National Science Foundation of China.

For more about the research of Yulin Chen go here