Heralding a new age of terrific timekeeping, a research group at JILA—a joint institute of the University of Colorado Boulder and the National Institute of Standards and Technology—has unveiled an experimental strontium atomic clock that has set new world records for both precision and stability.

The clock is in a laboratory at JILA, located on the CU-Boulder campus.

Described in a new paper in Nature*, the JILA strontium lattice clock is about 50 percent more precise than the record holder of the past few years, NIST’s quantum logic clock. Precision refers to how closely the clock approaches the true resonant frequency at which its reference atoms oscillate between two electronic energy levels. The new strontium clock is so precise it would neither gain nor lose one second in about 5 billion years, if it could operate that long. (This time period is longer than the age of the Earth, an estimated 4.5 billion years old.)

The strontium clock’s stability—the extent to which each tick matches the duration of every other tick—is about the same as NIST’s ytterbium atomic clock, another world leader in stability unveiled in August 2013. Stability determines in part how long an atomic clock must run to achieve its best performance through continual averaging. The strontium and ytterbium lattice clocks are so stable that in just a few seconds of averaging they outperform other types of atomic clocks that have been averaged for hours or days.

“We already have plans to push the performance even more,” said NIST/JILA Fellow and group leader Jun Ye, who is also an adjoint professor of physics at CU-Boulder. “So in this sense, even this new Nature paper represents only a ‘mid-term’ report. You can expect more new breakthroughs in our clocks in the next 5 to 10 years.” 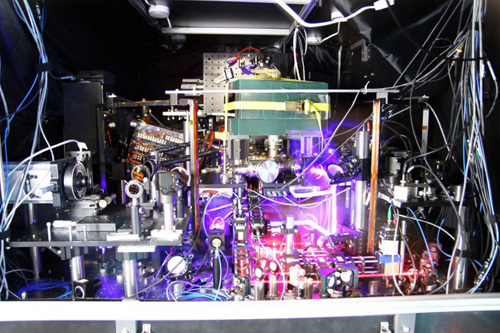 JILA’s experimental atomic clock based on strontium atoms held in a lattice of laser light is the world’s most precise and stable atomic clock. This image is a composite of many photos taken with long exposure times and other techniques to make the lasers more visible. (Image credit: Ye group and Brad Baxley/JILA)

The current international definition of units of time requires the use of cesium-based atomic clocks, such as the current U.S. civilian time standard clock, the NIST-F1 cesium fountain clock. Hence only cesium clocks are accurate by definition, even though the strontium clock has better precision. The strontium lattice clock and some other experimental clocks operate at optical frequencies, much higher than the microwave frequencies used in cesium clocks. Thanks to the work at NIST, JILA and other research organizations across the world, the strontium lattice clock and other experimental clocks may someday be chosen as new timekeeping standards by the international community.

The strontium clock is the first to hold world records for both precision and stability since the 1990s, when cesium fountain atomic clocks were introduced. In the past decade, the rapid advances in experimental atomic clocks at NIST and other laboratories around the world have surprised even some of the scientists leading the research. NIST, which operates the NIST-F1 time standard, pursues multiple clock technologies because scientific research can take unpredictable turns, and because different types of atomic clocks are better suited for different practical applications.

In JILA’s world-leading clock, a few thousand atoms of strontium are held in a column of about 100 pancake-shaped traps called an optical lattice formed by intense laser light. JILA scientists detect strontium’s “ticks” (430 trillion per second) by bathing the atoms in very stable red laser light at the exact frequency that prompts the switch between energy levels.

To check the performance, the JILA team compared two versions of the strontium clock, one built in 2005 and the other just last year. Both clocks have set previous records of various types. In the latest work, the two clocks fully agreed with each other within their reported precision—demonstrating the ability to make a duplicate copy and maintain the performance level. This is an advantage for clock comparisons to lay the groundwork for the eventual selection of a next-generation time standard.

Recent technical advances enabling the strontium clocks’ record performance include the development of ultrastable lasers and precise measurements of key effects—atom collisions and environmental heating—that cause tiny changes in the clock’s ticking rate.

Next-generation atomic clocks have already contributed to scientific research and are expected to lead to the development of novel technologies such as super-sensors for quantities such as gravity and temperature.

The JILA research is supported by NIST, the Defense Advanced Research Projects Agency, and the National Science Foundation.