The popular new strategy of planting genetically engineered crops that make two or more toxins to fend off insect pests rests on assumptions that don’t always apply, UA researchers have discovered. Their study helps explain why one major pest is evolving resistance much faster than predicted and offers ideas for more sustainable pest control.

A strategy widely used to prevent pests from quickly adapting to crop-protecting toxins may fail in some cases unless better preventive actions are taken, suggests new research by University of Arizona entomologists published in the Proceedings of the National Academy of Sciences.

Corn and cotton have been genetically modified to produce pest-killing proteins from the bacterium Bacillus thuringiensis, or Bt for short. Compared with typical insecticide sprays, the Bt toxins produced by genetically engineered crops are much safer for people and the environment, explained Yves Carrière, a professor of entomology in the UA College of Agriculture and Life Sciences who led the study.

Although Bt crops have helped to reduce insecticide sprays, boost crop yields and increase farmer profits, their benefits will be short-lived if pests adapt rapidly, said Bruce Tabashnik, a co-author of the study and head of the UA department of entomology. “Our goal is to understand how insects evolve resistance so we can develop and implement more sustainable, environmentally friendly pest management,” he said. Tabashnik and Carrière are both members of the UA’s BIO5 Institute. 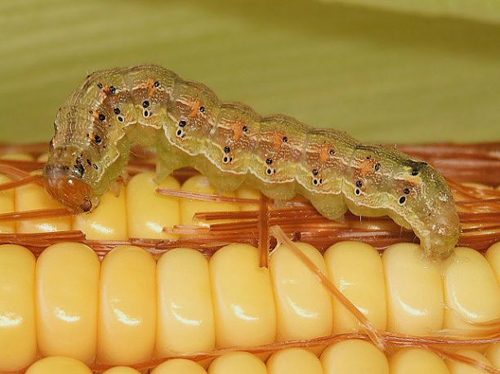 A major agricultural pest, the moth Helicoverpa zea and its caterpillar go by many common names, depending on the crop they feed on: Shown here is a “corn earworm.” (Photo courtesy of José Roberto Peruca)

Bt crops were first grown widely in 1996, and several pests have already become resistant to plants that produce a single Bt toxin. To thwart further evolution of pest resistance to Bt crops, farmers have recently shifted to the “pyramid” strategy: each plant produces two or more toxins that kill the same pest. As reported in the study, the pyramid strategy has been adopted extensively, with two-toxin Bt cotton completely replacing one-toxin Bt cotton since 2011 in the U.S.

Most scientists agree that two-toxin plants will be more durable than one-toxin plants. The extent of the advantage of the pyramid strategy, however, rests on assumptions that are not always met, the study reports. Using lab experiments, computer simulations and analysis of published experimental data, the new results help explain why one major pest has started to become resistant faster than anticipated.

“The pyramid strategy has been touted mostly on the basis of simulation models,” said Carrière. “We tested the underlying assumptions of the models in lab experiments with a major pest of corn and cotton. The results provide empirical data that can help to improve the models and make the crops more durable.”

One critical assumption of the pyramid strategy is that the crops provide redundant killing, Carrière explained. “Redundant killing can be achieved by plants producing two toxins that act in different ways to kill the same pest,” he said, “so, if an individual pest has resistance to one toxin, the other toxin will kill it.”

In the real world, things are a bit more complicated, Carrière’s team found out. Thierry Brévault, a visiting scientist from France, led the lab experiments at the UA. His home institution, the Center for Agricultural Research for Development, or CIRAD, is keenly interested in factors that could affect pest resistance to Bt crops in Africa. 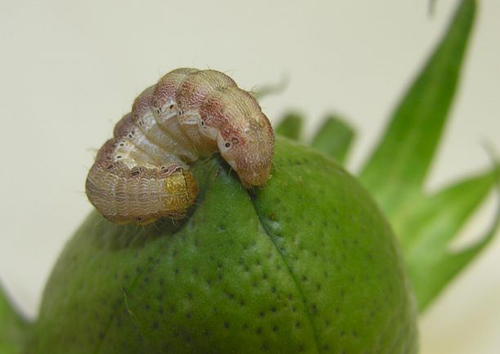 “We obviously can’t release resistant insects into the field, so we breed them in the lab and bring in the crop plants to do feeding experiments,” Carrière said. For their experiments, the group collected cotton bollworm – also known as corn earworm or Helicoverpa zea –, a species of moth that is a major agricultural pest, and selected it for resistance against one of the Bt toxins, Cry1Ac.

As expected, the resistant caterpillars survived after munching on cotton plants producing only that toxin. The surprise came when Carrière’s team put them on pyramided Bt cotton containing Cry2Ab in addition to Cry1Ac.

“But on the two-toxin plants, the caterpillars selected for resistance to one toxin survived significantly better than caterpillars from a susceptible strain.”

These findings show that the crucial assumption of redundant killing does not apply in this case and may also explain the reports indicating some field populations of cotton bollworm rapidly evolved resistance to both toxins.

Moreover, the team’s analysis of published data from eight species of pests reveals that some degree of cross-resistance between Cry1 and Cry2 toxins occurred in 19 of 21 experiments. Contradicting the concept of redundant killing, cross-resistance means that selection with one toxin increases resistance to the other toxin.

According to the study’s authors, even low levels of cross-resistance can reduce redundant killing and undermine the pyramid strategy. Carrière explained that this is especially problematic with cotton bollworm and some other pests that are not highly susceptible to Bt toxins to begin with.

The team found violations of other assumptions required for optimal success of the pyramid strategy. In particular, inheritance of resistance to plants producing only Bt toxin Cry1Ac was dominant, which is expected to reduce the ability of refuges to delay resistance.

According to Tabashnik, overly optimistic assumptions have led the EPA to greatly reduce requirements for planting refuges to slow evolution of pest resistance to two-toxin Bt crops.

The new results should come as a wakeup call to consider larger refuges to push resistance further into the future, Carrière pointed out. “Our simulations tell us that with 10 percent of acreage set aside for refuges, resistance evolves quite fast, but if you put 30 or 40 percent aside, you can substantially delay it.”

“Our main message is to be more cautious, especially with a pest like the cotton bollworm,” Carrière said. “We need more empirical data to refine our simulation models, optimize our strategies and really know how much refuge area is required. Meanwhile, let’s not assume that the pyramid strategy is a silver bullet.”