A genetic pathway involving proteins in the endosomes of cells appears to be misregulated in the brains of children with autism, according to a newly published statistical analysis in the journal Molecular Psychiatry. Previously the genes were shown to cause rare forms of the disease but the new study suggests they have a wider role.

The genes encode the proteins NHE6 and NHE9, which are responsible for biochemical exchanges in the endosomes of cells. Mutations in the NHE6 gene are a direct cause of Christianson Syndrome, while mutations in the NHE9 gene lead to a severe form of autism with epilepsy. In the new study, a statistical analysis published in the journal Molecular Psychiatry, Brown University researchers and their colleagues found a specific pattern of misregulation of those two genes — NHE9 is up-regulated and NHE6 is down-regulated — in the brains of children with autism compared to the brains of non-autistic children.

“These genes play a role, not just in the rare forms of autism but also in the generalized pathology of autism,” said Dr. Eric Morrow, professor of biology and professor of psychiatry and human behavior at Brown University, the paper’s senior author. “In autism I think people get overwhelmed because there are hundreds of different genes. One of the important things is to find points of convergence where there are events that might be common across different forms.” 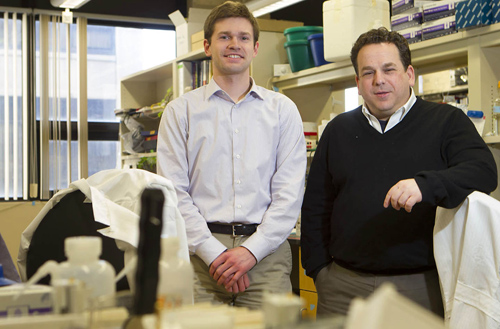 The new study suggests that misregulation of NHE6 and NHE9 is one such event.

The research is based on a statistical analysis of messenger RNA samples from a bank of brain tissue donated posthumously by some children who had autism and some who did not. Messenger RNA is a key molecular player in the process of gene expression, making it an indicator of how gene expression was regulated in the cerebral cortex of each of the children.

Guided by Morrow, who studies autism genomics and sees autism patients at the E.P. Bradley Hospital in East Providence, lead author Matthew Schewede spent the summer of 2012 poring over the raw data, which was made available from a 2011 study led by co-author Daniel Geschwind and Irinia Voineagu of the University of California–Los Angeles.

Schwede, who studied statistics as an undergraduate at Harvard, is now a second-year student in the Warren Alpert Medical School. His classes are a block away from Morrow’s lab, making the collaboration easy.

“We kind of stumbled on this,” Schwede said. “At first we were just identifying what was up- and down-regulated in autism cerebral cortex in this data set.”

But Schwede’s findings about the NHE genes caught Morrow’s attention in particular, because Morrow has been studying the NHE6 and NHE9 genes and the rare autism forms they cause.

“When we realized that some genes of interest for our lab were altered in the cerebral cortex, we focused the analysis on these genes in particular and how they were related to other processes,” Schwede said.

Schwede made a second key finding: a strong and significant correlation between the misregulation of the NHE genes and the down-regulation of synapse genes, which is known to occur in autism.

Schwede’s purely statistical analysis does not explain the physiology of how up-regulation of NHE9 and down-regulation NHE6 would affect synapse formation or general autism, but Morrow’s biology group has a clear next step: to observe the neural and behavioral effects in the lab of misregulation of those genes in various experimental systems.

“That’s a hypothesis that we can take to the mouse,” Morrow said. “When we knock out these genes, how do the synapses change?”

The statistical results point out the value of studying rare forms of autism, not only for the sake the patients who have those conditions, Morrow said, but also because doing so can inform research about other forms of autism.

“We argue that it’s relevant but sometimes, in fairness, we wonder about that,” Morrow said. “A study like this really conveys strongly that that’s a fair argument.”

In addition Schwede, Morrow, and Geschwind, other authors are Krassimira Garbett and Karoly Mirnics of Vanderbilt University.

This grant was funded by the National Institute of Mental Health, the Simons Foundation for Autism Research Initiative, and the Nancy Lurie Marks Family Foundation. Schwede was funded by a summer research assistantship from the Alpert Medical School.