Using a new method for estimating greenhouse gases that combines atmospheric measurements with model predictions, Lawrence Berkeley National Laboratory (Berkeley Lab) researchers have found that the level of nitrous oxide, a potent greenhouse gas, in California may be 2.5 to 3 times greater than the current inventory.

At that level, total N2O emissions—which are believed to come primarily from nitrogen fertilizers used in agricultural production—would account for about 8 percent of California’s total greenhouse gas emissions. The findings were recently published in a paper titled “Seasonal variations in N2O emissions from central California” in Geophysical Research Letters. Earlier this year, using the same methodology, the researchers found that levels of methane, another potent greenhouse gas, in California may be up to 1.8 times greater than previous estimates.

“If our results are accurate, then it suggests that N2O makes up not 3 percent of California’s total effective greenhouse gases but closer to 10 percent,” said Marc Fischer, lead researcher on both studies. “And taken together with our previous estimates of methane emissions, that suggests those two gases may make up 20 to 25 percent of California’s total emissions. That’s starting to become roughly comparable to emissions from fossil fuel CO2.” 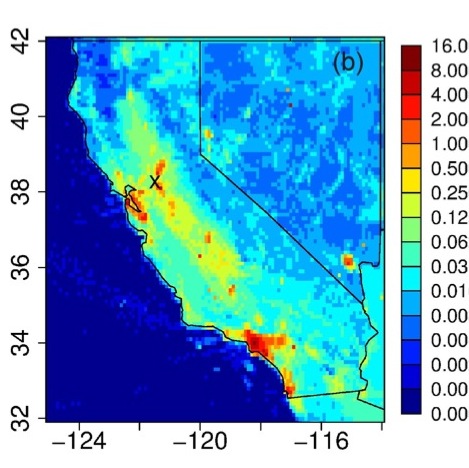 This map shows the amount of nitrous oxide emissions in California (in nanomoles per square meter per second). The "x" represents the location of the measurement tower in Walnut Grove, CA. Image credit: Berkeley Lab

Accurate estimates of the California’s greenhouse gas emissions are important as the state works to reduce emissions to 1990 levels by 2020, as mandated by a law known as AB 32. The vast majority of the reduction efforts have been focused on CO2.

Nitrous oxide, better known as laughing gas, is an especially potent greenhouse gas because it traps far more infrared radiation than both carbon dioxide and methane. “It’s present in the atmosphere at tiny concentrations—one-thousandth that of CO2—but it is very potent,” Fischer said. “It has a global warming potential of approximately 300, meaning it is 300 times more active than CO2 per unit mass. And it’s 10 to 15 times more potent than methane.”

Worldwide levels of N2O have been rising rapidly for decades, and the major culprit was recently confirmed to be the heavy use of nitrogen fertilizers to grow the world’s food. Other less significant sources of N2O emissions include wetlands, animal and industrial waste and automobiles. 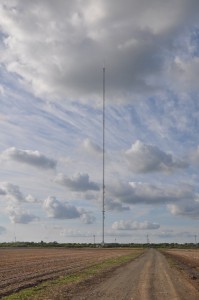 The standard method for estimating emissions levels has been to do what is called a “bottom-up inventory.” This process involves listing all the activities that emit N2O, assigning an emission factor for each activity, then tallying up the emissions. However, this method can result in large uncertainties because of the way N2O is produced.

“The biogeochemical processes that produce N2O are sensitive to environmental conditions and very small changes in things like temperature, moisture, the type of soil and when the fertilizer is applied,” Fischer said. “All those factors can result in big differences in the amount of N2O that’s produced. If you try to use a single number for a given patch of land, you’re almost certainly going to get a variable result.”

While there are models that try to capture these factors, “it is still likely the numbers are going to have relatively large uncertainties, especially compared to thing like burning fossil fuels to make CO2, where pretty much every mole of carbon becomes CO2,” Fischer said.

The method that Fischer and his colleagues describe in their paper compares measurements taken from a 2,000-foot tower in Walnut Grove, California to model predictions of expected N2O levels based on the bottom-up inventory to arrive at the new estimate. “This is the first study of its kind to look at a full annual cycle of emissions—actually it’s two years—from a large region of California that includes the sources that we believe are most important,” Fischer said. “In general, we found that the measured signals were much bigger than the predicted signals.”

The predicted signal at the tower was calculated by taking the bottom up inventory (from EDGAR, the Emissions Database for Global Atmospheric Research) and running it through a weather model—which includes information on wind speed and direction. “From that we can estimate how much signal we should see at the tower per unit of emission on the land surface,” Fischer said.

He acknowledges that his new method also has sources of uncertainty. For example, the EDGAR model is weighted to urban areas with large populations, which may not be an accurate assumption for N2O emissions from California. “Further work in urban areas is necessary,” he said.”

Fischer is working with the California Air Resources Board to add measurement instruments for both nitrous oxide and methane at additional towers around the state to further refine the data and better understand emissions from urban areas.

As a way to verify the method, Fischer and his team are currently comparing measured and predicted fossil fuel CO2 signals at the tower since there is a much better understanding of how much fossil fuel is burned in California. If the predicted signal and measured signal are close, then that would be a good indication that the method is sound. “Initial comparisons of measured and predicted fossil fuel signals agree at the 10 to 20 percent level, suggesting that it is unlikely there are much larger errors in the transport model,” he said. “But we haven’t ruled it out.”

Fischer is head of the California Greenhouse Gas Emissions Measurement (CALGEM) Project at Berkeley Lab. This research was supported by funding from the California Energy Commission. Scientists from the National Oceanic and Atmospheric Administration (NOAA), Lawrence Livermore National Laboratory and the University of Colorado at Boulder contributed to the study.