Close as a Blade-Shaving and Masculinity

Moustaches from the classic handlebar to the dramatic Dali are soon to be cut short as the month of Mo’vember draws to a close, and clean shaven faces return from their period of charitable exile.

Research by a historian at the University of Exeter into the history of shaving and masculinity in eighteenth century Britain shows the advancement of new technologies in steel and the connection between advertising are inextricably linked to a closer shave.

Shaving chimed in with the Age of Enlightenment, where the advance of knowledge through science was encouraged and notions of gentility, polish, and proper self-presentation were hailed. Numerous middle and upper class men in the 18th century known as dandy’s or fops placed a great deal of emphasis on physical appearance, were clean shaven and considered themselves elegant gentlemen. To sport a beard or any form of facial hair was considered to be barbarous or associated with a rustic country cousin, rather than a fashionable man about town. In fashionable circles the period between the Stuarts and the Victorians was a beardless age. 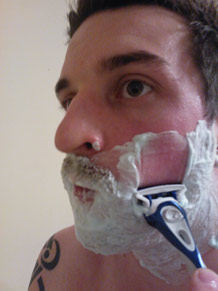 In the mid-18th century, technological advances in steelmaking saw new varieties of metal come onto the market. Crucible steels were at the forefront of developing tough and durable metals that were also able to be polished to a mirror shine. Razor makers played an important part in driving technological change, because of the precise qualities they looked for in the materials they used. The 18th century can be seen as a great age of innovation in metals.

University of Exeter, Medical Historian Dr Alun Withey said:“New types of steel meant sharper and more durable razors, in turn affecting the practice of shaving. Cleanliness and control over self image dovetailed with broader ideas about possibilities of harnessing nature through technological and scientific progress. It is the first time in history that men increasingly began to shave themselves rather than visit a barber.”

Makers of new cast steel razors began to realise the financial benefits of targeting a potentially much bigger customer base of individual shavers rather than professional barbers when publishing their products. A growing range of ancillary products clearly aimed at individuals were advertised in newspapers, such as the 1772 advert by Charles Woodcock of London whose ‘Paste for Shaving’ promised a “sweet scented lather” making shaving closer and smoother and “without the least disagreeable smart”. The market for shaving products expanded in the 18thcentury, as adverts began to address gentlemen who shaved themselves, (technically called auto-pogonotomy).

Dr Withey added: “Razor makers advertised their wares using carefully constructed sales pitches, linking razors and shaving to broader male interest in science. An emphasis on the ‘scientific’ foundation of new steels began to creep into advertising, such as James Stodart’s razors, which were “tempered by thermometer” rather than by the eye, which he stated removed all elements of uncertainty. Far from being an everyday chore, shaving was now the domain of scientists and philosophers. Razors were thus simultaneously a product of, and a vector for, Enlightenment ideas.”