Researchers from North Carolina State University, Sandia National Laboratories, and the University of California, San Diego have developed new technology that uses microneedles to allow doctors to detect real-time chemical changes in the body – and to continuously do so for an extended period of time.

“We’ve loaded the hollow channels within microneedles with electrochemical sensors that can be used to detect specific molecules or pH levels,” says Dr. Roger Narayan, co-author of a paper describing the research, and a professor in the joint biomedical engineering department of NC State’s College of Engineering and the University of North Carolina at Chapel Hill. 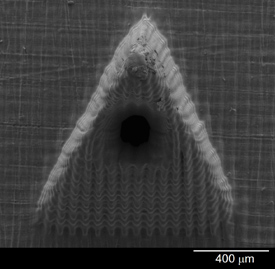 Scanning electron micrograph of a hollow microneedle. In this study, hollow microneedles were integrated with sensors for detection of glucose, lactate, and pH levels. Image credit: North Carolina State University

Existing technology relies on taking samples and testing them, whereas this approach allows continuous monitoring, Narayan explains. “For example, it could monitor glucose levels in a diabetic patient,” Narayan says. Microneedles are very small needles in which at least one dimension – such as length – is less than one millimeter.

“The idea is that customized microneedle sensor arrays could be developed and incorporated into wearable devices, such as something like a wristwatch, to help answer specific medical or research questions,” Narayan says. “It’s also worth pointing out that microneedles are not painful.”
In addition to its clinical applications, the new technology may also create opportunities for new research endeavors. For example, the microneedle sensor arrays could be used to track changes in lactate levels while people are exercising – rather than measuring those levels only before and after exercise.

The researchers developed a proof-of-concept sensor array incorporating three types of sensors, which could measure pH, glucose and lactate. However, Narayan says the array could be modified to monitor a wide variety of chemicals.

The paper, “Multiplexed Microneedle-based Biosensor Array for Characterization of Metabolic Acidosis,” is published online in the journal Talanta. The paper was co-authored by Narayan and NC State Ph.D. students Philip Miller and Shelby Skoog as well as researchers from Sandia National Laboratories and the University of California, San Diego. The research was funded by the National Science Foundation, the National Institutes of Health, and the Department of Energy.