A team of researchers jointly led by Yale University and Columbia University has released a report that introduces a framework for assessing China’s environmental management and performance. This analysis offers the first independent review of Chinese provincial-level environmental performance by international researchers.

“As the world’s most populous country and second largest economy, China is confronting significant environmental challenges across the board, from air and water quality to natural resource management, waste management, toxics exposure, biodiversity conservation, and greenhouse gas emissions,” said Douglas Kysar, interim director of the Yale Center for Environmental Law and Policy and Professor of Law at Yale Law School.

Beijing’s air quality has dominated media headlines over the recent weeks with scores of articles demonstrating public concern over hazardous air quality. Much of the debate has stemmed from the failure of the central Chinese government to release accurate air quality measurements and allow public access to data. 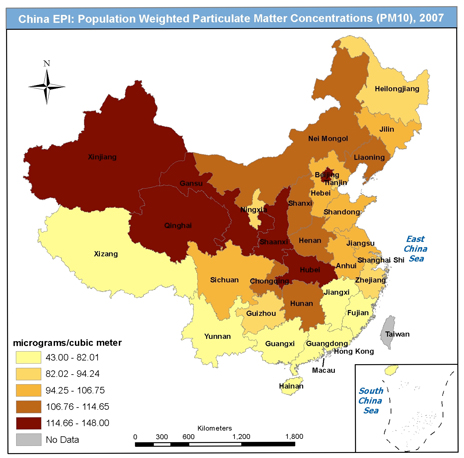 This map depicts indicator scores for particulate matter smaller than 10 micrometers by province. It shows the best performers in yellow and the worst performers in dark brown. Natural dust from soils and crustal material may be contributing to the high concentrations of particulate matter found in the northwestern portions of China. PM10 and smaller particles are of particular health concern as they can be inhaled into the lungs and cause serious respiratory diseases. Image credit: Yale University

“The recent controversies surrounding air quality in Beijing highlight the importance of measurement and appropriate metrics to inform sound decision-making in China,“ said Marc Levy, deputy director of the Center for International Earth Science Information Network at Columbia University. “In this case, failure to measure fine particulate matter (PM 2.5) meant that the government missed critical air quality data that directly impacts the health of citizens.  Independent measures of PM 2.5 by the US Embassy in Beijing indicated that the air quality was much worse than what the government was communicating.”

All of this is occurring in the context of high population densities, rapid economic growth, and the imperative of lifting large numbers of people out of poverty. Given the challenges China faces, “it is important for the government to have policy tools that are adequate for guiding and prioritizing action,” Levy added.

Researchers were able to rank Chinese provinces for 32 indicators in 12 environmental policy categories (e.g., air pollution, water quality, climate change, biodiversity, agriculture, and forestry), however, the lack of clear policy targets for many environmental metrics in China, as well as concerns over data sources and transparency, meant that researchers were unable to produce an aggregated environmental performance index.

While stopping short of producing a final index that would have ranked the 31 provinces and municipalities according to environmental performance, the report is a major first step in providing a blueprint for metrics the government can use to aid tracking progress toward policy goals. The report comes at a particularly salient time for Chinese policymakers, who are in the process of implementing local plans to implement the recently adopted 12th Five-Year Plan. The Plan is considered the greenest to date with high-level goals concerning climate change, energy, and environmental pollutants.

The Yale Center for Environmental Law & Policy and the Center for International Earth Science Information Network (CIESIN) at Columbia University have been world leaders in developing national-scale environmental indices since 1998, producing a global Environmental Performance Index (EPI) that is released every two years. The most recent of these reports, the 2010 EPI, provides national policymakers with a scientifically accurate and easily applicable tool for advancing data-driven environmental decisionmaking. The 2010 EPI ranks 163 countries on 25 performance indicators tracked across ten policy categories covering both environmental public health and ecosystem vitality. The next EPI will be released in January 2012 at the World Economic Forum in Davos.

The global EPI, however, only addresses environmental issues at the national scale. Given China’s diverse geographical landscapes and semi-autonomous local governments, a sub-national index is a more effective tool for developing national environmental policy.

“Filling the information gaps identified by this research project will enable policymakers to better spot problems, track trends, highlight policy successes and failures, identify best practices, and optimize the gains from investments in environmental protection,” said Angel Hsu, China EPI Project Director at the Yale School of Forestry and Environmental Studies. “Given the challenges China faces, it is important for the government to have policy tools, like a provincial-level EPI, that can help guide effective pollution control and natural resource management.”

Researchers conclude in the report that while China has a solid foundation to build a cutting-edge environmental performance measurement system at the provincial level, access to raw data and underlying methodologies for statistics, as well as a lack of clear policy targets for many issues, hinder the ability to construct a sub-national index. Robust environmental data can already be found in some sectors, such as energy efficiency and chemical oxygen demand discharge data, and there are signs that China is making greater improvements in pollutant measurement for air and water quality. However, the unevenness of measurement systems and transparent, consistent methodologies for environmental monitoring are persistent challenges that the Chinese government recognizes and has pledged to tackle in the 12th Five-Year Plan.

The report is available in English; a Chinese version will be available shortly.