Measuring the Distant Universe in 3-D

The biggest 3-D map of the distant universe ever made, using light from 14,000 quasars — supermassive black holes at the centers of galaxies many billions of light years away — has been constructed by scientists with the third Sloan Digital Sky Survey (SDSS-III).

The map is the first major result from the Baryon Oscillation Spectroscopic Survey (BOSS), SDSS-III’s largest survey, whose principal investigator is David Schlegel of the U.S. Department of Energy’s Lawrence Berkeley National Laboratory (Berkeley Lab). The huge new map was presented at the April meeting of the American Physical Society in Anaheim, CA, by Anže Slosar of Brookhaven National Laboratory.

BOSS is the first attempt to use baryon acoustic oscillation (BAO) as a precision tool to measure dark energy. Baryon oscillation refers to how matter clumps in a regular way throughout the universe, a physical manifestation of the expansion of the universe. Until now, 3-D maps showing this oscillation have been based on the distribution of visible galaxies. BOSS is the first survey to map intergalactic hydrogen gas as well, using distant quasars whose light is produced by supermassive black holes at the centers of active galaxies.

“Quasars are the brightest objects in the universe, which we use as convenient backlights to illuminate the intervening hydrogen gas that fills the universe between us and them,” Slosar says. “We can see their shadows, and the details in their shadows” – specifically, the absorption features in their spectra known as the Lyman-alpha forest – “allowing us to see how the gas is clumped along our line of sight. The amazing thing is that this allows us to see the universe so very far away, where measuring positions of individual galaxies in large numbers is impractical.” 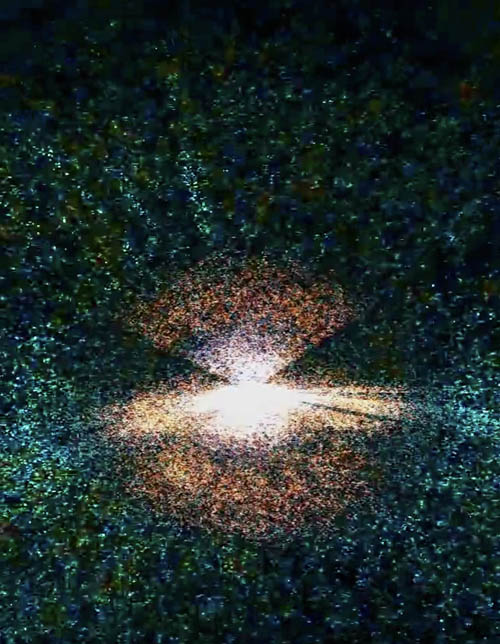 “BOSS is the first attempt to use the Lyman-alpha forest to measure dark energy,” says principal investigator Schlegel. “Because the Sloan Telescope has such a wide field of view, and because these quasars are so faint, there was no one who wasn’t nervous about whether we could really bring it off.”

By using 14,000 of the quasars collected by the Sloan Telescope at Apache Point Observatory in New Mexico during the first year of BOSS’s planned five-year run, the new map demonstrates that indeed it is possible to determine variations in the density of intergalactic hydrogen gas at cosmological distances and thus to measure the effects of dark energy at those distances.

Slosar, who leads BOSS’s Lyman-alpha cosmology working group, says that while similar measurements have been made with individual quasars or small groups of quasars in the past, “These have given only one-dimensional information about fluctuations in density along the line of sight. Before now there has never been enough density of quasars for a 3-D view.”

The distance scale of the new map corresponds to an early time in the history of the universe, when the distribution of matter was nearly uniform. Any effects of dark energy detected so early would settle basic questions about its nature.

Measuring the expansion history of the universe

Baryon acoustic oscillation is cosmologists’ shorthand for the periodic clustering (oscillation) of matter (baryons), which originated as pressure (acoustic) waves moving through the hot, opaque, liquid-like early universe. The pressure differences resulted in differences in density and left their signature as small variations in the temperature of the cosmic microwave background. Later – because the denser regions formed by the pressure waves seeded galaxy formation and the accumulation of other matter – the original acoustic waves were echoed in the net-like filaments and voids of the clustering of galaxies and in variations in the density of intergalactic hydrogen gas.

The oscillations repeat at about 500-million-light-year intervals, and because this scale is firmly anchored in the cosmic microwave background it provides a ruler – a very big one – to measure the history of the expanding universe. With this cosmic yardstick it will be possible to determine just how fast the universe was expanding at the redshift of the objects in the BOSS survey – in other words, how the expansion rate has changed over time. (Redshift is the degree to which the light from an object speeding away from the viewer is shifted toward the red end of the spectrum.) Knowing whether expansion has accelerated at a constant rate or has varied over time will help decide among the major theories of dark energy. 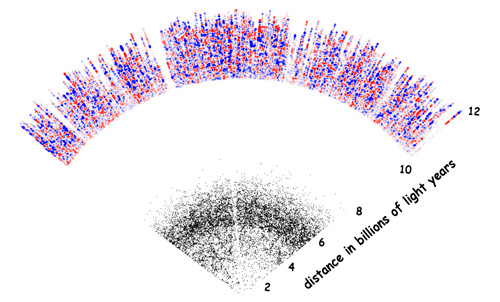 A 2-D slice through BOSS’s full 3-D map of the universe to date. The black dots going out to about 7 billion light years are relatively nearby galaxies. The colored region beginning at about 10 billion light years is intergalactic hydrogen gas; red areas have more gas and blue areas have less. The blank region between is inaccessible to the Sloan Telescope, but the proposed BigBOSS survey would be able to observe it. Image credit: Anže Slosar and BOSS Lyman-alpha cosmology working group.

Over its five-year extent, BOSS is using two distinct methods to calibrate the markings on the cosmic yardstick. The first method, well tested, will precisely measure 1.5 million luminous red galaxies at “low” redshifts around z = 0.7 (z stands for redshift). The second method will eventually measure the Lyman-alpha forest of 160,000 quasars with high redshifts around z = 2.5. These redshifts correspond to galaxies at distances of 2 to 6 billion light years and quasars at 10 to 11 billion light years.

Lyman-alpha is the name given to a line in the spectrum of hydrogen, marking the wavelength of light emitted when an excited hydrogen electron falls back to its ground state; it’s a strong signal in the light from quasars. As the quasar’s light passes through intervening clouds of hydrogen gas, additional lines accumulate where the gas clouds absorb the signal, echoing it but shifting by different degrees according to factors including the redshift of the gas cloud and its density. The spectrum of a distant quasar may have hundreds of lines, clumped and blended into a messy, wiggly structure in the spectrum: this is what astronomers call the Lyman-alpha forest.

“In theory, you can turn any of these absorption lines directly into redshifts and locate the gas cloud precisely,” says Bill Carithers of Berkeley Lab’s Physics Division, who concentrates on extracting relevant information from the noisy data that comes straight from the telescope. “But in practice only the spectra of the very brightest quasars are clean enough to make things that simple.” 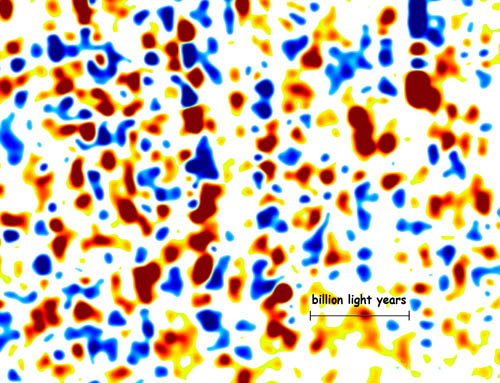 Zooming in on the map slice shows areas with more gas (red) and less gas (blue) as revealed by correlations of the Lyman-alpha forest data from the spectra of thousands of quasars. A distance of one billion light years is indicated by the scale bar. Image credit: Anže Slosar and BOSS Lyman-alpha cosmology working group.

Carithers says that “while a very long exposure could improve the signal-to-noise ratio, that comes at a price. We need lots and lots of quasars to make a map. We can only afford to spend so much telescope time on each.”

Since the heart of BAO is the correlation distance among density oscillations, the trick turns out to be not overconcentrating on individual spectra but instead measuring the correlations among them. “For any correlation distance, many quasars will contribute,” says Carithers, “so the noise will average and the signal will get stronger. We can say, ‘I’ll use my data, noise and all.’”

If the attempt to measure density variations in the intergalactic gas is indeed successful, what will the BAO correlation signal from the Lyman-alpha forest look like? Shirley Ho of Berkeley Lab’s Physics Division, working with Slosar and Berkeley Lab’s Martin White, developed simulations to find out.

“”We modeled what you would see when you have a BOSS-like data set, and through the simulations we understand the possible sources of systematics when we try with real data to detect the acoustic peak from the Lyman-alpha forest, the signature of baryon acoustic oscillations,” Ho says. Comparing the real data to the simulation confirms whether the search is working as hoped.

With Peter Nugent, who heads the Computational Cosmology Center at Berkeley Lab’s National Energy Research Scientific Computing Center (NERSC), Ho established a 30-terabyte BOSS Project Directory to store the Lyman-alpha simulations, plus the entire Lyman-alpha raw data set as it arrives. The directory also contains a subset of galaxy data and is available to all BOSS collaborators and to the public. The total BOSS data set is stored in a dedicated cluster of computers nicknamed Riemann.

The wide-field Sloan Telescope covers a wide expanse of sky at moderate magnification. To measure both galaxies and quasars, a thousand targets for each BOSS exposure are selected in advance from existing surveys. At the telescope’s focal plane, “plug plates” are precision-machine-drilled with tiny holes at positions of known galaxies and quasars. These holes are plugged with optical fibers that channel the light from each chosen galaxy or quasar to a spectrograph, which isolates the spectrum of each individual object. Schlegel credits Berkeley Lab’s Nicholas Ross for doing much of the “incredibly hard work” involved in this targeting.

Slosar says, “Our exploratory paper includes less than a tenth of the 160,000 quasars that BOSS will study, but already that’s enough to establish a proof of the concept. This is a potentially revolutionary technique for mapping the very distant universe. We’re paving the way for future BAO experiments like BigBOSS to follow suit.” BigBOSS is a proposed survey that will find precise locations for 20 million galaxies and quasars and go beyond BOSS to encompass 10 times the volume of the finished BOSS map.

“By the time BOSS ends, we will be able to measure how fast the universe was expanding 11 billion years ago with an accuracy of a couple of percent,” says Patrick McDonald of Berkeley Lab and Brookhaven, who pioneered techniques for measuring the universe with the Lyman-alpha forest. “Considering that no one has ever measured the cosmic expansion rate so far back in time, that’s a pretty astonishing prospect.”

Says Slosar, “We now know we can use the Lyman-alpha forest to look at the dark energy. There is all this structure at the distant universe that has never been seen before. Sometimes I feel like an adventuring cartographer from the Middle Ages!”

Lawrence Berkeley National Laboratory addresses the world’s most urgent scientific challenges by advancing sustainable energy, protecting human health, creating new materials, and revealing the origin and fate of the universe. Founded in 1931, Berkeley Lab’s scientific expertise has been recognized with 12 Nobel prizes. The University of California manages Berkeley Lab for the U.S. Department of Energy’s Office of Science. For more, visit www.lbl.gov .