Measuring the “Other” Greenhouse Gases: Higher Than Expected Levels of Methane in California

Working with scientists from the National Oceanic and Atmospheric Administration (NOAA) Berkeley Lab scientists Marc L. Fischer and Seongeun Jeong combined highly accurate methane measurements from a tower with model predictions of expected methane signals to revise estimated methane emissions from central California. They found that annually averaged methane emissions in California were 1.5 to 1.8 times greater than previous estimates, depending on the spatial distribution of the methane emissions. 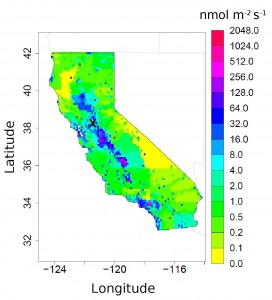 This map shows the amount of methane in California (measured in nanomoles per square meter per second). The "x" represents the location of the measurement tower in Walnut Grove, CA. Image credit: Berkeley Lab

At those levels, methane would account for 9 percent of the state’s greenhouse gas emissions, compared to the current estimate of 6 percent. Their findings were published in a paper titled “Seasonal variation of CH4 emissions from Central California” in the Journal of Geophysical Research.

Both the research findings as well as the methodology will have important implications for policymakers as the state strives to reduce its emissions. Under a law known as AB 32 California has a mandate to reduce greenhouse gas emissions to 1990 levels by 2020. However, until now there has not been a good method of estimating methane emissions.

“Direct greenhouse gas emission measurements will be crucial to a sound energy and environment policy,” Fischer said. “This paper lays out a scientific method for evaluating future reductions in emissions that could be used to evaluate the success of mitigation activities at a large scale.”

Methane is a relatively potent but short-lived greenhouse gas (with a 10-year atmospheric lifetime), which traps about 70 times more heat than carbon dioxide per unit mass when averaged over a 20-year timescale. In contrast, carbon dioxide, the most abundant greenhouse gas, stays in the atmosphere for about 100 years. Black carbon (soot) is the other major short-lived climate pollutant.

Together, the short-lived climate pollutants account for about one-third of current global warming, with methane accounting for about 13 percent. Attention has increasingly turned to these short-lived pollutants recently since actions to reduce their emissions will yield a faster climate response than reducing carbon dioxide emissions. In February the United States launched the Climate and Clean Air Coalition to Reduce Short-Lived Climate Pollutants, which the G8 has just agreed to join. And last month the California Air Resources Board held a hearing on these pollutants, at which Fischer made a presentation. 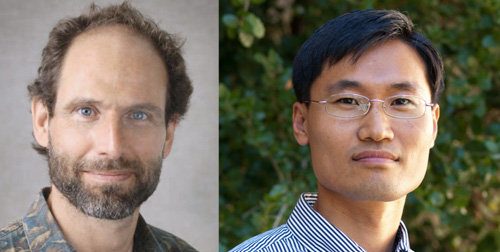 Fischer and Jeong’s study started with measurements taken in 2008 from a 2,000-foot tower in Walnut Grove, California, 30 miles south of Sacramento. “The instruments on the tower measure the complete suite of greenhouse gases, ranging from CO2—including just the fossil fuel fraction of the CO2—to methane, nitrous oxide and halocarbon gases, or refrigerants,” said Fischer.

Measurements were taken hourly and then compared with a transport model of large-scale airflows over the earth with a high spatial and temporal resolution. This allowed the scientists to essentially track where the air came from; they used NOAA measurements of the background methane to estimate the methane concentrations entering California. 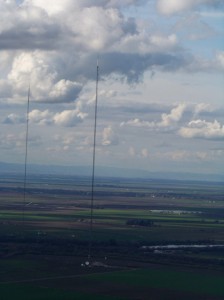 As part of the study, errors associated with the wind model were quantified by comparing predicted values to actual values; those errors were then run through the entire model to quantify any errors in the emissions estimate. “We do a very careful analysis of the uncertainties associated with both the modeling system and the measurements, so we can say fairly accurately how certain the results are,” Jeong said.

Since Fischer and Jeong did the analysis for this paper, they have begun a new collaboration with the California Air Resources Board (CARB) to include data from five additional towers throughout California’s Central Valley set up by CARB. Further analysis on the additional data supported their initial results. “We are fairly confident that our measurements in the Central Valley capture about 90 percent of California’s emissions,” Fischer said.

Methane does have natural sources of emission, such as wetlands and the decomposition of organic matter. The current study does not have a way of separating natural sources from anthropogenic ones, but that is next on the research agenda. “We believe the majority of emissions from California are anthropogenic,” Fischer said. “We’ve lumped them together for the time being, but we’re starting a new project for the state of California which will use measurements of additional trace gases to attribute methane emissions to different sources.”

Fischer is head of the California Greenhouse Gas Emissions Measurement (CALGEM) Project at Berkeley Lab. Jeong is a postdoctoral fellow with a specialty in numerical analysis of earth system models. This research was supported by funding from the California Energy Commission. The article is posted online at the Journal of Geophysical Research.