The adulthood of a midge fly is decidedly brief — about three days. But a new study of its mating swarm may yield lasting benefits for analyses of bird flocks, fish schools, human crowds and other forms of collective animal motion.

“This is a field where there’s been almost no quantitative data,” said Nicholas T. Ouellette of the Yale School of Engineering & Applied Science, principal investigator of the research, published Jan. 15 in the journal Scientific Reports. “What we’ve been able to do is put this in the laboratory, and that lets us take as much data as we want.”

The experiment — the first large-scale quantitative description of an insect swarm — is part of a larger effort to understand how local, spontaneous interaction among living things leads to the organization of complex, dynamic, but coherent systems.

Most previous work on swarms has focused on descriptions of group behavior, such as the size of the swarm and how long it lasts. The methods employed in the new study allow for quantitative measurements of individual participating insects, allowing researchers to ask more detailed questions about swarm behavior.

Using synchronized high-speed cameras and other tools developed for turbulent flow studies, Ouellette and co-author Douglas H. Kelley, now a postdoctoral researcher at MIT, measured the three-dimensional positions, velocities, and accelerations of swarms’ individual members over time, as well as those of the swarms. 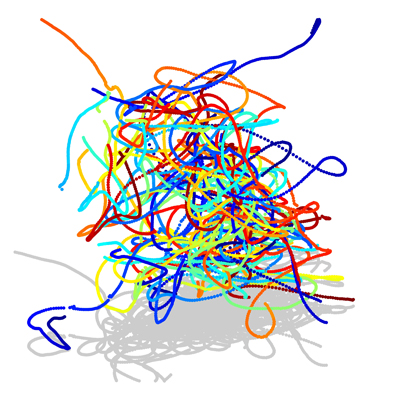 A study of the midge fly's mating swarm may yield lasting benefits for the understanding of bird flocks, fish schools, elephant herds, human crowds and other forms of collective animal motion. This image depicts the trajectories followed by individual midges in an observed swarm. (Illustration by Douglas Kelley)

Researchers also found that there appear to be subgroups within the larger swarm.

“It suggests a degree of modularity — that the swarm is not just built of individuals moving randomly relative to each other, but that you have some sub-flocks organizing in a hierarchical way,” said Ouellette.

Finally, researchers found that something appears to attract the midges, wherever they are in the swarm, to the throng.

“There’s something binding them to the swarm” that is not an external force, said Ouellette, assistant professor of mechanical engineering. “It’s got to be coming from the interactions.”

He continued: “Collective motion is so common in biology — cells do it, fish do it, birds do it, people do it. This suggests that it’s a really useful solution to a lot of different issues that organisms face, especially as all of these different organisms move collectively for different reasons — mating, predator avoidance, movement efficiency, and so on. Also, from an engineering standpoint, spontaneous collective activity seems like it should be a really good design principle. If nature keeps re-inventing it, it must be a good idea.”

The researchers used Chironomus riparius midges. They obtained data on 10 swarming events, containing as few as 10 and as many as 100 flies.

The Army Research Office provided support for the project.