The world’s streams, rivers and lakes are under increasing stress because of human water management – and mismanagement – that threaten aquatic biodiversity and the water supply, Charles J. Vörösmarty said recently during the second annual John R. Mather Visiting Scholars Lecture.

Vörösmarty, professor of civil engineering with the City College of New York, presented “Global Water Crisis: The Slippery Slope” on May 3 at the University of Delaware’s Roselle Center for the Arts.

“The contemporary water system is really defined increasingly by the actions of humans,” he said.

Vörösmarty began by discussing the worldwide water systems in relation to climate change. As the atmosphere gets warmer, he explained, it holds more moisture, produces more rain, affects land runoff and in turn creates more atmospheric moisture. Land precipitation has increased 2 to 3 percent, he said, with variability in this part of the water cycle increasing.

“The earth’s atmosphere, as it’s heated, can hold more moisture, and then it gets into all sorts of mischief,” he said. 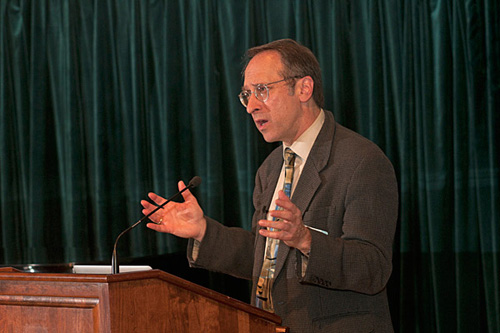 Yet beyond climate change, Vörösmarty and his colleagues wrote in Science in 2000 that humans are causing significant water stress in more direct ways. Reservoirs, deforestation, development, irrigation, levees and other manmade impacts adversely affect the flow of natural water systems, he said.

“We were actually a bit worried when we first published this because everyone was very, very convinced that with respect to the water question, climate was the big 800-pound gorilla in the room,” Vörösmarty said. “But no one bothered at the time to test the idea that maybe some of the direct management or mismanagement of water by humans was invoking some level of water stress at a global scale.”

He suggested that water management is causing more stress to the overall water system than climate change, and said that over the next few decades humans will directly modify the character of water systems. 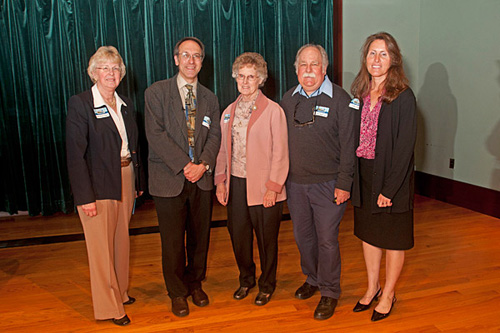 Pictured are (from left) Nancy Targett, dean of the College of Earth, Ocean, and Environment; Charles Vörösmarty; Sandra F. Mather; Cort Willmott, professor of geography; and Tracy DeLiberty, chair of the Department of Geography. Photo by Duane Perry

Fresh water is generally seen as a local resource, Vörösmarty said, with small-scale relevance for sanitation, urban water supplies, water quality, agriculture and ecosystem services. He argued that local circumstances need a global picture for context, however, and in aggregate human uses and pressures on water – such as water treatment for human consumption, large dams, nitrogen pollution, inland fishing and invasive species – are on the rise.

Together with other researchers, Vörösmarty created a series of world maps with four themes: watershed disturbance, water resource development, pollutants and biotic threats like overfishing. For example, they looked at stored runoff in reservoirs and considered the aquatic life altered by water such engineering projects.

“Fish and aquatic wildlife are keyed into the hydrology of naturally flowing systems,” Vörösmarty said. “Their chemistry, their thermal regimes are all distorted by these kinds of water engineering works.”

Vörösmarty went on to describe his research published as a cover story in Nature in 2010, presenting two global models on threats to human water security and river biodiversity.

Combining data from around the world, he showed that species are at risk in industrializing places like India and China where rivers are known to be under serious stress. Yet biodiversity is also threatened in more fully developed places like the United States and Europe because of what he called “sloppy development.”

When looking at human water security, on the other hand, the United States and Europe are considered safe, but only because of expensive engineering infrastructure for clean drinking water, flood protection and other efforts. He said that 200 million Americans live within 10 miles of an impaired waterway, and the nation uses substantial resources to fix underlying problems instead of preventing issues in the first place.

“What you might not know is that that nice clean water has all this infrastructure separating you from what nature has given us as that water service,” Vörösmarty said.

While that solution is viable for wealthy nations, it does not represent an affordable path for poorer countries – and does not address threatened biodiversity. Vörösmarty advocated going beyond infrastructure to work with and preserve ecosystems to protect watersheds. He suggested integrating preventative solutions to help avoid costly measures that treat symptoms instead of root causes, such as keeping uplands intact to regulate hydrology.

After describing other solutions, toward the end of his talk Vörösmarty underscored the legacy effects of decisions made today and posed a rhetorical question to the audience: “If it’s all true that we’re going to be in a resource-constrained world, and a more crowded world, don’t we want to have a different way of doing business?”

Click here to watch a video of the full lecture.

Charles Vörösmarty develops computer models with geospatial data sets to study connection among the water cycle, climate, biogeochemistry and human activities. He examines local, regional, continental and global-scale water balance and changes in river systems, as well as the impacts of large-scale water engineering on the terrestrial water cycle. He is a distinguished scientist with NOAA-Cooperative Remote Sensing Science and Technology Center and director of the City University of New York’s Environmental Crossroads Initiative at the City College of New York. Previously he was a research full professor at the Institute for the Study of Earth, Oceans and Space at the University of New Hampshire

The John R. Mather Visiting Scholars Lecture honors the memory of John (Russ) Mather, UD professor of geography from 1963 to 2003 and Department of Geography chair from 1966 to 1989. Sandra F. Mather established the lectureship to honor her late husband and enable the department to host well-known scholars for the active exchange of ideas related to his broad interests in climatology and geography.

“Russ touched so many people during his lifetime as a teacher, mentor, friend and guide,” Sandra Mather said following Vörösmarty’s presentation. “It’s nice to see that that legacy is going to continue.”