*Researchers coax viruses to assemble into synthetics with microstructures and properties akin to those of corneas, teeth and skin*

Using a simple, single-step process, engineers and scientists at the University of California at Berkeley recently developed a technique to direct benign, filamentous viruses called M13 phages to serve as structural building blocks for materials with a wide range of properties.

By controlling the physical environment alone, the researchers caused the viruses to self-assemble into hierarchically organized thin-film structures, with complexity that ranged from simple ridges, to wavy, chiral strands, to truly sophisticated patterns of overlapping strings of material–results that may also shed light on the self-assembly of biological tissues in nature.

Each film presented specific properties for bending light, and several films were capable of guiding the growth of cells into structures with precise physical orientations.

Led by University of California at Berkeley bioengineer Seung-Wuk Lee and his student and lead author Woo-Jae Chung, the researchers published their findings in the Oct. 20, 2011, issue of Nature.

“We are very curious how nature can create many diverse structures and functions from single structural building blocks, such as collagens for animals and celluloses for plants,” says Lee. “We have thought that periodic changes in cell activity–such as from day to night, or summer to winter–cause cells to secrete different amounts of macromolecules into confined and curved micro-environments, which might play critical roles in the formation of such sophisticated structures. We believe that biological helical nanofiber structures play a critical role in that process, yet for collagen and cellulose, it has proven quite difficult to engineer their chemical and physical properties to study their assembly process. Therefore, we have been looking for new, helical engineering materials.” 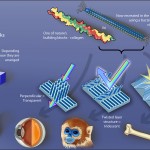 About the image: This illustration reveals how the arrangement of molecular building blocks results in materials with unique properties, both in nature and in the laboratory. Image credit: Zina Deretsky, National Science Foundation

The fundamental unit of the novel films is the bacteria-hunting virus, M13. In nature, the virus attacks Escherichia coli (E.coli), but in bioengineering laboratories, the virus is emerging as a nanoscale tool that can assemble in complex ways due to its long, slender shape and its chiral twist.

“Fortunately,” adds Lee, “M13 also possesses an elegant helical surface that makes it a best fit for this study.”

By varying the speed at which they withdrew the substrates from the virus-rich solution, the concentration of viruses in the solution, and the ionic concentration, the researchers were able to craft three distinct categories of films.

The simplest film consisted of alternating bands of filaments, with the viral filaments in each band oriented perpendicular to the filaments in the adjacent band. Created using a relatively low concentration of viruses in the starter solution, the bands formed as the substrate rose out of the liquid with a repeated stick-slip motion. 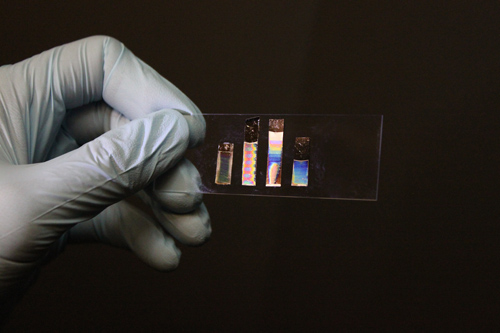 To create films at the next hierarchical level of complexity, the researchers increased the concentration of viruses in the solution, which added more physical constraints to each filament’s movement within its environment. As a result, the filaments bunched together into helical ribbons, with a handedness at a broader scale than the handedness of each individual virus.

With even higher concentrations-and in some experiments, greater substrate-pulling speed-the withdrawal yielded ever more complex, yet ordered, bundles of filaments that the researchers referred to as “ramen-noodle-like”.

“Nature can dynamically change environmental variables when building new tissues to control an assembly process,” adds Chung, the first author. “The beauty of our system is that we can do the same. By altering various parameters we drive assembly towards specific structures in a controlled manner. We can even make different structures on the same substrate.” 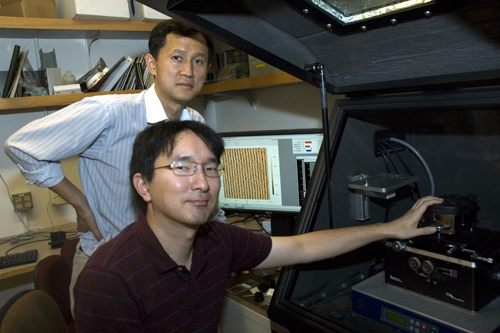 By varying their techniques, the researchers altered the physical environment for the viral filaments, ultimately forcing the viruses to align into the highly specialized structural films. Each film is different, as expressed by differences in color, iridescence, polarity and other properties.

In one expression of those differences, structures built using faster-pulled substrates yielded patterns that reflected ever-shorter wavelengths of light–50 microns per minute yielded material that reflected light in the orange color range of the spectrum (600 nm), while 80 micrometers per minute yielded blue light (450 nm). The process was precise, allowing the researchers to tune the films to various wavelengths and colors, and induce polarization.

The researchers believe the hierarchical nature of the structures reflects the hierarchical growth patterns of similar biomolecules in nature, processes that result in chiral materials, like collagen, expressing themselves as the building blocks of a cornea in one level of self-assembly and the building blocks of skin tissue at a more complex level. Such self-assembly yields stunning macroscale structures–for example, skin tissue that appears blue on birds and blue-faced monkeys is actually not expressing the light absorption from blue pigment, but the blue light scattered by complex arrays of chiral, molecular building blocks.

“We strongly believe that our novel approach to constructing biomimetic ‘self-templated’, supramolecular structures closely mimics natural helical fiber assembly,” says Lee. “One important reason is that we not only mimicked the biological structures, but we also discovered structures that have not been seen in nature or the laboratory, like the self-assembled ‘ramen-noodle structures’ with six distinct order-parameters.”

About the video: In this NSF webcast, University of California at Berkeley bioengineer Seung-Wuk Lee describes how his team developed a new way to rapidly and efficiently manufacture novel nanomaterials using viruses as the building blocks. Credit: National Science Foundation

In addition to crafting novel biomolecular films with unique traits, the researchers also demonstrated that the films can serve as biological substrates. The team was able to grow sheets of cells that were oriented based on the texture of such substrates, with one variation incorporating calcium and phosphate to create a biomaterial similar to tooth enamel.

“This novel, self-templating, biomaterials assembly process could be used in many other organic and inorganic materials to build hierarchical structures to tune optical, mechanical and even electrical properties from nano to macro scales,” adds NSF Biomaterials program director Joseph Akkara, who helped fund the project. “The reported approaches could be used to investigate mechanisms for diseases such as Alzheimer’s, which is caused by amyloid aggregation in our brain tissues. More broadly, the breakthroughs could potentially yield scientific impacts in the area of tissue regeneration and repair.”

The Berkeley research was conducted with support from numerous sources including the National Science Foundation.