I vs. We: Individuals Perform Better When Focused on Team

EAST LANSING, Mich. — Individuals perform better and are more confident when they practice motivational tactics focused not on them but on the team they belong to, according to a recently published study by Michigan State University researchers.

The findings, published in the Journal of Sports Sciences and led by Veronica Son and Deborah Feltz of the Department of Kinesiology, reveal that simply changing “I” to “we” in self-talk motivational statements has a significant impact on an individual’s – and thus a group’s – performance.

Son, a doctoral student in the Department of Kinesiology and lead author of the study, said most of the research on “self-talk” – the internal talk one does in getting ready for performance – examined the effect of building up an individual’s confidence.

She was curious about the impacts of self-talk when it was focused on the group’s performance and confidence. 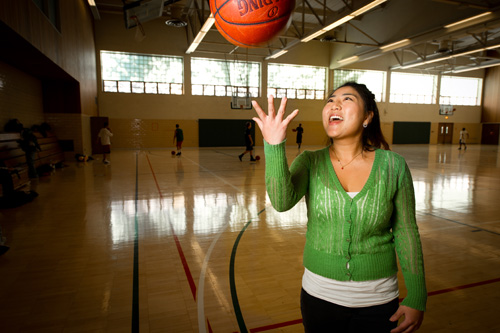 Veronica Son, a doctoral student in the Department of Kinesiology, led a study that focused on "self-talk" - the internal talk one does in getting ready for performance. Photo by G.L. Kohuth

“I believe in the power of ‘we,'” Son said. “The study revealed that group-oriented self-talk enhanced a team’s confidence. The findings provide fundamental information about how to effectively build positive team outcomes using self-talk focused not on ‘I’ but ‘we’.”

As part of the study, 80 subjects were randomly assigned to three different groups before completing a team-based dart-throwing activity: One used self-talk statements focusing upon one’s personal capabilities; another used statements emphasizing the group’s capabilities; and the third was a control group where neutral statements were implemented.

Overall, performance indicators and confidence in the team were all greatest for individuals who practiced self-talk focusing on the group’s capabilities.

“By focusing on the team, you include yourself without putting the focus or extra pressure on yourself,” said Feltz, chairperson of the Department of Kinesiology.

While the study focused on a sports context, Son and Feltz said working as a group is prevalent in many of life’s contexts, from business to academia.

“This definitely goes beyond athletics,” Feltz said. “Reinforcing the sense of team and focusing on a team goal can help someone change health behaviors or reach sales goals.”

Son is already completing a follow-up study focusing on performance anxiety and whether group-focused self-talk plays a role in decreasing anxiety.