The meal is pushed way, untouched. Loss of appetite can be a fleeting queasiness or continue to the point of emaciation. While it’s felt in the gut, more is going on inside the head.

New findings are emerging about brain and body messaging pathways that lead to loss of appetite, and the systems in place to avoid starvation. 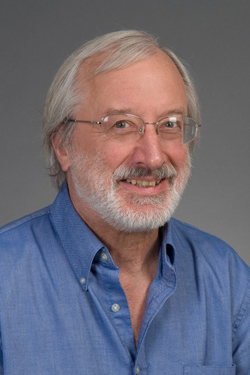 Today, scientists report in Nature about a brain circuit that mediates the loss of appetite in mice. The researchers also discovered potential therapeutic targets within the pathway. Their experimental results may be valuable for developing new treatments for a variety of eating disorders. These include unrelenting nausea, food aversions, and anorexia nervosa, a condition in which a person no longer wants to eat enough to maintain a normal weight.

The senior author of the paper is Dr. Richard D. Palmiter, University of Washington professor of biochemistry and an investigator with the Howard Hughes Medical Institute. His co-authors are Dr. Qi Wu, formerly of the UW and now at the Eagles Diabetes Research Center and Department of Pharmacology at Carver College of Medicine, University of Iowa, and Dr. Michael S. Clark of the UW Department of Psychiatry and Behavioral Sciences. Palmiter is known for co-developing the first transgenic mice in the 1980s with Dr. Ralph Brinster at the University of Pennsylvania. His more recent studies are of chemicals that nerve cells use to communicate with each other, their roles in mouse brain development and function, and their relation to behavior.

Palmiter and his colleagues concentrated on a part of the brain, a relay center called the parabrachial nucleus, because it is an important hub for integrating signals from several brain regions to modulate food intake. Nausea, as well as taste aversion or preferences, may originate from signals processed in the parabrachial nucleus.

In this most recent study, the researchers discovered the type and location of brain cells that send signals that agitate the parabrachial nucleus and thereby squelch the ability to eat. They also demonstrate how these signals can be blocked to restore normal appetite and to ward off starvation.

Earlier studies by Palmiter’s team and by Dr. Michael Schwartz’ team at UW Center for Excellence in Diabetes and Obesity Research showed that certain nerve cells in the brain’s hypothalamus play a role in promoting feeding and weight gain. They do so by collating a variety of signals from the body. If these brain cells are destroyed, feeding stops. Meals will be refused and liquid food placed into the mouth will hardly be swallowed.

The researchers later learned that the ensuing starvation is due to the excessive activation of the brain’s parabrachial nucleus. The researchers found that starvation could be prevented by improving receptor signaling for a substance called GABA and thereby calm the excited parabrachial nucleus. This intervention had to be done within a critical adaptation period to be successful. GABA is one of the most common neurotransmitters – chemicals that ferry messages to and from nerve cells in the brain.

At first, the scientists were puzzled about the source of the command that turns on the parabrachial nucleus and makes it turn feeding off. Their research fingered two suspects and their locations in the brain. Their studies pointed out nerve cells involved with another neurotransmitter, glutamate, in the part of the brain called the nucleus tractus solitarus. Also contributing to the abnormal activation were cells involved in serotonin signaling. Both drive the hyper-excitability of nerve cells in the parabrachial nucleus that inhibit feeding.

The researchers went on to discover several ways to reinstate normal appetite by interfering with input signaling from these two cell types. They also tested how to censor “don’t eat” signals coming from cells in the parabrachial nucleus.

Their studies revealed six interventions that prevented starvation when the cells that modulate food intake in the hypothalamus no longer function. These interventions acted upon various aspects of signaling to and from the parabrachial nucleus, in most cases by disabling or reducing signals or their receptors.

The researchers were able to prevent severe loss of appetite in their mouse model by administering bretazenil, a drug that promotes GABA signaling, or by administering ondansetron, a drug used to prevent nausea and vomiting during cancer chemotherapy. The Palmiter team also used specially constructed viruses to selectively reduce signaling by glutamate – the major excitatory signal in the brain.

The researchers believe that additional progress in dissecting circuits that control feeding will be achieved by identifying genes that are active in specific populations of brain cells within the parabrachial nucleus. Finding such genes will allow investigators to selectively manipulate their activity in the mouse and thereby control feeding behaviors.