UA undergraduate researcher Ersilia Anghel has been collecting artistic photographs of minerals, plants, animals and humans, illustrating the intersections between the arts and sciences.

Scientists and artists have long collaborated to produce illustrative images and paintings of medical procedures, human anatomy and botanical displays.

But with the emergence of new, advanced technologies, scientists have begun to more readily produce their own photographic works, often times revealing the aesthetics of another world around us. 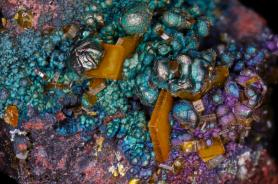 For University of Arizona undergraduate researcher Ersilia Anghel, the realization hit while engaged in a general lab procedure, sectioning and staining tissue samples.

Anghel, who also is studying art history at the UA, found the procedure was the same as a sculpting assignment, during which she was to carve a balloon from foam.

“I knew there was no way I was the only one who saw the connection between science and art in that way,” said Anghel, an Honors College student also majoring in biochemistry and molecular biophysics.

And so, having received a UA Honors College undergraduate research grant and with support from her mentor, UA faculty member Sarah Moore, Anghel curated an exhibition, “Sci-Pho: Explorations in the Aesthetics of Scientific Photography,” of scientific photography produced by UA faculty members and students. 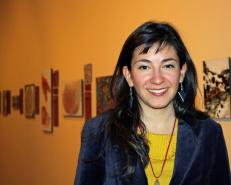 The UA's Ersilia Anghel is a rising star in the world of undergraduate researchers. For her research and work, Anghel has been named a Goldwater Scholar and UA Pillars of Excellence Scholar. She has received numerous other local and national awards and honors. (Photo credit: Beatriz Verdugo/UANews)

The exhibition is now on display at the UA Museum of Art, along with exhibitions curated by two other UA students. The works will remain on display through May 27.

For the show, Anghel reached out to scientists at the UA and elsewhere in different disciplines to share their work. She found that, often times, scientists utilized photography to document their work.

“People even put this work in their homes or give them to their friends because they see the aesthetic value in them,” she said.

“So many people have come to appreciate them for their aesthetics, which is a principle in art,” Anghel said. “The idea is that art should be pleasing, or displeasing. Either way, there is an emotional response.”

Thus, the images in the show she curated “demonstrate the inherent aesthetics of specimens when viewed at their most basic structural level,” said Anghel, who graduates from the UA in May. 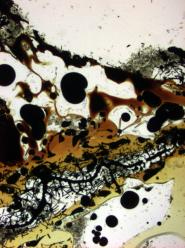 Moore, an associate professor in the UA’s School of Art, connected Anghel with the UA Museum of Art. She said it “goes without saying” that Anghel is intelligent and that her work is relevant.

“But she is so much more than that,” Moore said. “Her double major in science and art history speaks to her range of interests and recognition that one way of thinking does not preclude or diminish the value of the other.”

Moore said Anghel’s exhibition was quite ambitious and also interdisciplinary, as she engaged artists, scientists and historians.

“If you think about it, art history provides excellent training for anyone who needs to be able to both look carefully at details and nuance while placing them within a broader context,” Moore said.

“And this show embraces the campus-wide emphasis on cross-disciplinary research and inquiry and demonstrates the practical value of not restricting one’s scholarship to a single disciplinary stream,” she added. 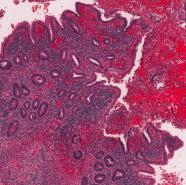 Born in Romania, but raised in Canada and the U.S., Anghel has triple citizenship. Through her upbringing and her scientific work through the UA, she also has traveled abroad to the Netherlands and the United Kingdom.

Whenever abroad, Anghel said she takes the opportunity to visit ancient sites, museums and galleries to view artwork.

“It’s like cheating. I get to go to these international medical conferences and also get to see all of this phenomenal art,” said Anghel, who began taking art history courses, later deciding to complete the program.

“I’ve always been surrounded by arts,” she added. Along the way, one of her teachers encouraged her to study art history, saying it would be “something good to talk about during cocktail parties.”

But Anghel, who also was involved in the UA’s Undergraduate Research Biology Program, found a deeper connection and different perspective about the function and role of art, particularly when considering science.

In curating the show, it became obvious: The more one looks, the more one sees in scientific photography.

Magnified and high-resolution images of fulgurite, glass tubes formed by lightening, appeared to be blogs of ink suspended in water.

A cross section of a pituitary gland appeared to be a vast landscape, seemingly littered with roadways.

In each of the works selected for the show, Anghel said she saw a direct connection among nature, art, science and interdisciplinary research.

“The natural world is the source of ideals in line, shape, balance, proportion and grace,” Anghel said. “There is a mystery behind it. If you look really closely at something, there is beauty and art.”