UCLA life scientists and colleagues have produced one of the first high-resolution genetic maps for African American populations. A genetic map reveals the precise locations across the genome where DNA from a person’s father and mother have been stitched together through a biological process called “recombination.” This process results in new genetic combinations that are then passed on to the person’s children.

The new map will help disease geneticists working to map genetic diseases in African Americans because it provides a more accurate understanding of recombination rates among that population, said the senior author of the research, John Novembre, a UCLA assistant professor of ecology and evolutionary biology and of bioinformatics. The map could help scientists learn the roots of these diseases and discover genes that play a key role in them.

The study was published July 20 in the online version of the journal Nature Genetics and will be published in the print edition at a later date.

“Research aimed at finding disease variants will be improved by this tool, which could lead to better medications to help ameliorate the effects of those disease variants,” Novembre said. “Health researchers can use a recombination map to refine where a disease gene might be.” 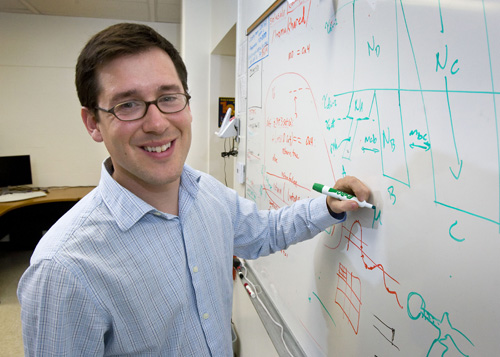 Prior to this research, which was conducted by scientists from seven institutions, recombination had mainly been studied in European populations.

“Now we have a map for African Americans that researchers can use as a tool, instead of using a European map or an African map,” said Novembre, a member of UCLA’s Interdepartmental Program in Bioinformatics.

A second, independent study, led by David Reich at Harvard University and Simon Myers at Oxford University, used a similar approach to infer an African American recombination map. That research was published this week in Nature.

“While recombination rates between populations are very similar when you look at the broadest scales of the genome, we start to see variation in recombination between populations when we zoom in,” said Daniel Wegmann, a UCLA postdoctoral scholar in Novembre’s laboratory and the lead author of the study. “There are clear differences in recombination between Africans and Europeans, and African Americans tend to have a map that is a mixture between the African and European map, reflecting the mixture that took place between these two groups.

“If the position of a mutation is unknown and you want to pinpoint a gene linked to a disease, then recombination is important to help reveal in what region the gene lies,” Wegmann said.

The mixture of African and European ancestry typical in the DNA of African Americans is reflected in recombination rates, Novembre said.

The life scientists used an innovative method involving population genetic models in which they scanned the individual genomes of 2,565 African Americans, as well as 299 African Caribbeans, to study where in the genome each had African ancestry, where they had European ancestry, and where the “switch points” were that mark the location where the ancestry of a DNA segment changes.

Novembre and colleagues studied the ancestry of DNA segments to reconstruct where recombinations have occurred.

“The key is to uncover the ancestry of each segment of the genome,” Novembre said. “Switch points enable us to identify recombination ‘hot spots,’ where recombination rates are high.”

“It is difficult to identify, by studying chromosomes directly, where the stitch points are between maternal and paternal DNA,” he said. “In individuals of mixed ancestry, however, such as African Americans and African Caribbeans, we can identify switch points between African ancestry and European ancestry. These switch points mark locations where recombinations have occurred at some point in the past.”

“There are regions of our map that differ from what we would expect,” Wegmann said. “We see locations where there are deficiencies in recombination, and they line up with the locations of mutations that rearrange the genome and flip a piece of DNA to invert it. When you have a normal copy of the DNA and an inverted copy of the DNA, one from your mother and one from your father, this inversion suppresses recombination.”

Of some 3 billion base pairs in a person’s genome, the scientists were able to resolve recombination rates down to 50,000 base pairs of the DNA — an impressive figure.

Comparing this African American recombination map with that of other populations enables researchers to locate recombination hot spots, which have highly elevated rates of recombination.

In addition to the applications for disease mapping, the research provides broad insights into the fundamental biological process of recombination.

“We want to learn how recombination rates vary across the genome,” Novembre said.

Nelson Freimer, director of the UCLA Center for Neurobehavioral Genetics and a professor of psychiatry at the Semel Institute for Neuroscience and Human Behavior at UCLA, is a principal investigator on the research, along with Novembre and Wegmann, and helped to organize the collaborative effort to bring together the large sample used in the study.

The consortia were funded by the STAMPEED (SNP Typing for Association with Multiple Phenotypes from Existing Epidemiological Data) program run by the National Heart, Lung and Blood Institute of the National Institutes of Health. Novembre’s research was also funded by the Searle Foundation.