A Woods Hole Oceanographic Institution (WHOI) scientist, analyzing ancient plankton DNA signatures in sediments of the Black Sea, has found for the first time that the same genetic populations of a virus and its algal host can persist and coexist for centuries. The findings have implications for the ecological significance of viruses in shaping algae ecosystems in the ocean, and perhaps fresh water as well.

“The finding that the DNA of viruses and algal host cells can be preserved in the geological records is of great interest to microbial ecologists,” said Marco Coolen of WHOI’s Marine Chemistry and Geochemistry department and author of the study, which appears in the July 22 issue of Science. “This offers unprecedented insights into long-term algal, viral, and host population dynamics between globally important algae and their viral pathogens in the ocean.”

In examining the 7,000-year continuous genetic record in sediments underlying the Black Sea, Coolen discovered that the DNA of both the Coccolithovirus and its host, Emiliania huxleyi, a phytoplankton that plays a major role in the global carbon cycle, have been preserved over thousands of years. 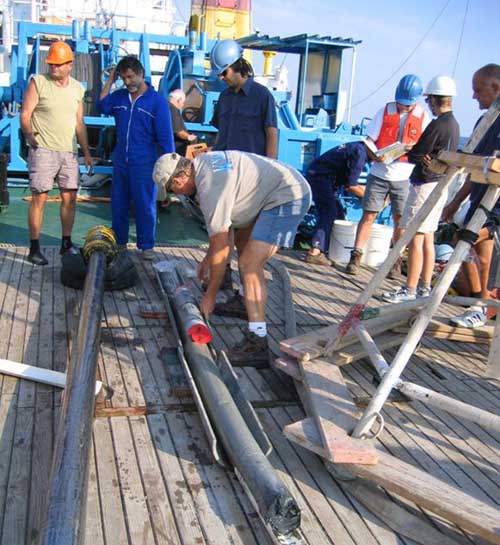 The giant gravity core just after being removed from the core barrel. The sediments were captured inside a plastic liner (“sausage core”) during coring. (Photo by Cornelia Wuchter, Woods Hole Oceanographic Institution)

“Biologists now for the first time have a picture of long-term viral/host dynamics in the ocean,” Coolen said. Previous laboratory work had confirmed such co-existence for only a few successive years.

Coolen added that much longer virus/host records such as the ones he studied, for the first time “could answer important questions, such as:

‘What factors are involved in controlling viral infection of the globally important marine algae and how long can the same host and virus populations co-exist?’ and ‘Were past algal populations only controlled by the prevailing environmental conditions or did viruses also play an important role in shaping past algal community structures?’”

The latter question is of particular interest, Coolen said, because “nobody has long-term records of viruses. Ecological shifts in past algal communities are generally explained by changes in climate and environmental conditions.” Now it seems possible, he said, that viruses also played an important role in shaping past algal communities. 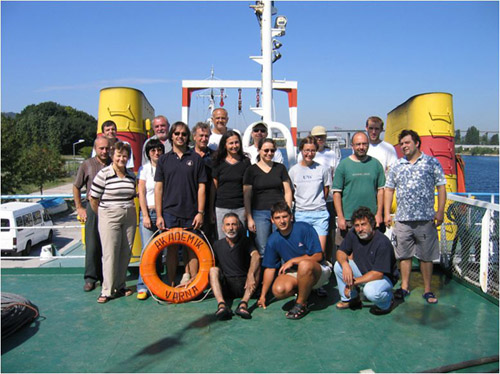 Marco Coolen (holding the ) and researchers from WHOI and the Institute of Oceanology, Bulgarian Academy of Sciences (IO-BAS) on board of the R/V Akademik. (Photo by Alan R. Gagnon, Woods Hole Oceanographic Institution)

This is important for E. huxleyi, which performs photosynthesis—“just like plants,” says WHOI scientist Benjamin Van Mooy. “They consume carbon dioxide.” In doing so, they reduce the amount of CO2 released into the atmosphere. They form a calcium carbonate shell, also helping to regulate the carbon cycle.

But DNA viruses of the genus Coccolithovirus kill off large populations of E. huxleyi, particularly in the North Atlantic. Van Mooy has traced this phenomenon to lipids, or fatty compounds, in certain viruses. If viruses are killing off phytoplankton, this can increase greenhouse emissions, Van Mooy suggests. “That’s important because if viruses infect a whole bunch of cells, then they can’t perform photosynthesis, they can’t take up carbon dioxide.”

Coolen says his data buttress Van Mooy’s work by suggesting a significant role for viruses in affecting the algal population and carbon cycling in the past. He observed, for example, major shifts in the types of Coccolithovirus and E. huxleyi in the Black Sea sediments over the centuries. Environmental conditions almost certainly had a role in selecting successful E. huxleyi genotypes, but Coolen believes viruses may have as well.

“Until now, shifts in past plankton species identified through the microscopic analysis of preserved diagnostic cellular fossils have mainly been linked to changes in environmental conditions and climate,” Coolen said. “However, understanding the viral role in controlling past algal stocks is necessary to improve the interpretation of past climate records. This can now be studied using ancient DNA methods.”

One thing that enabled Coolen to study sediments so far back in time was the continuous absence of oxygen in the bottom waters of the Black Sea the last 7,500 years. “This lack of oxygen facilitated the preservation of organic material in general and ancient viral and algal plankton DNA in particular,” he said.

In addition, unpublished data from Coolen’s lab “show that Black Sea sediments older than 7,500 years contain well-preserved DNA of a different suite of algae adapted to lower salinities and freshwater environments and likely also DNA of their viral pathogens,” he said. “In other words, comparable studies could most likely be employed in a wide variety of marine and lake ecosystems.

“In a different and broader context,” he adds, “it will perhaps be possible to reconstruct the historical spread of human viral diseases since a variety of human viral infections are also caused by DNA viruses.”

The research was funded by grants from the National Science Foundation (NSF) and a grant from the Andrew W. Mellon Foundation.