Professor Dionisius A. Agius of the University of Exeter’s Institute of Arab and Islamic Studies has been elected as a Fellow of the British Academy.

He is one of only 38 academics to be elected this year at its Annual General Meeting on 21 July. 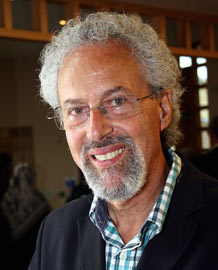 The British Academy is the UK’s national academy for the promotion of the humanities and social sciences and is an independent, self governing body of more than 900 Fellows. Dionisius A.Agius is Al Qasimi Professor of Arabic Studies and Islamic Material Culture and was elected as a British Academy Fellow for his research on Islamic material culture, maritime ethnography and Arabic language and linguistics.

Professor Aguis said: “I am very pleased indeed to be honoured in this way for my research which has largely centred on the traditional wooden seacraft of the Western Indian Ocean (the dhow). My linguistic background has enabled me to not only study the ethnography of the region, but also to reconstruct the past by tracing the terminology used by the seafaring communities. I am proud that my research has made this fascinating subject a legitimate area for academic study”.

His research on the history and provenance of traditional wooden vessels and their construction, the crew, folklore history, resources and trade routes in the Western Indian Ocean began with a two-year Leverhulme Fellowship (1996-1998). This resulted in a trilogy: In the Wake of the Dhow: The Arabian Gulf and Oman (2002); Seafaring in the Arabian Gulf and Oman: The People of the Dhow (2005) which was awarded a major book prize by the Abdullah Al-Mubarak Al-Sabah Foundation and the British-Kuwait Friendship Society for the best scholarly work on the Middle East, and finally Classic Ships of Islam: From Mesopotamia to the Indian Ocean (2008).

Professor Agius has also been awarded the Arts and Humanities Research Council (AHRC) grant (2002-2005) for the study of Arabic paper fragments, coins and the maritime trade of the Red Sea. His latest research is as principal investigator of a project funded by the Golden Web Foundation entitled: Maritime Ethnography of the Arabian Gulf and the Red Sea: People, Trade and Pilgrimage.

The Academy’s President, Sir Adam Roberts, said: “I congratulate all the distinguished Fellows who have been elected to the Academy this year, on achieving this peer group recognition of the outstanding contribution they’ve made to scholarship and research in the humanities or social sciences. Election is not only an honour, but also a beginning. I look forward to their active participation in the life and work of the Academy.”