Discovery Places Turtles Next to Lizards on Family Tree

Where do turtles belong on the evolutionary tree? For decades, the mystery has proven as tough to crack as the creatures’ shells. With their body armor and retractable heads, turtles are such unique creatures that scientists have found it difficult to classify the strange animals in terms of their origins and closest relatives.

“We know turtles evolved from a common ancestor along with birds, lizards and snakes about 300 million years ago, but who modern-day turtles are most closely related to is one of the biggest and most controversial questions in the field of systematics,” said Tyler Lyson, a Yale University graduate student who studies the evolutionary relationships between different animal groups.

Some researchers have analyzed turtles’ genes and found they are most closely related to the group of animals that includes crocodiles and birds. Others, comparing turtles’ physical features to those of other reptiles, have placed them next to lizards or outside of the larger subclass of animals that includes lizards, crocodiles and birds altogether. 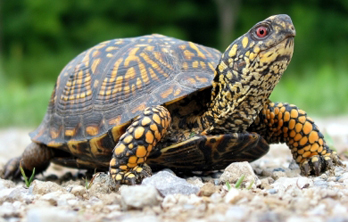 Now Lyson and his colleagues have used a novel approach involving microRNAs that strongly suggests turtles belong next to lizards.

Co-author Kevin Peterson, a paleobiologist at Dartmouth College, developed a technique to use microRNAs — small molecules that control gene activity and can switch certain genes on and off — to study evolutionary relationships. After discovering hundreds of microRNAs in the Carolina anole lizard, Peterson and co-authors then compared these to the microRNAs of a western painted turtle and an American alligator. The team found that four of the lizard’s microRNAs were also present in the turtle, but were absent in birds, crocodiles and all other animals.

“Different microRNAs develop fairly rapidly in different animal species over time, but once developed, they then remain virtually unchanged,” Peterson said. “They provide a kind of molecular map that allows us to trace a species’ evolution.”

The discovery, detailed online in Biology Letters, contradicts past studies that placed turtles next to crocodiles and birds rather than lizards. According to Lyson, those past findings were ambiguous and limited in scope, looking at just a few dozen genes, while the new technique analyzed all of the thousands of microRNAs found in turtles, lizards, and crocodiles.

“Our data unambiguously places turtles next to lizards,” Lyson said. “But the data itself isn’t infallible. We still need more data from these species in order to say definitely that turtles and lizards are evolutionary cousins.”

Next, the team plans to use its microRNA analysis on other animals to help determine their origins and relationships as well, and is developing a web-based platform to share the software with other researchers around the world.