A protein known as Sp2 is key to the proper creation of neurons from stem cells, according to researchers at North Carolina State University. Understanding how this protein works could enable scientists to “program” stem cells for regeneration, which has implications for neural therapies.

Troy Ghashghaei and Jon Horowitz, both faculty in NC State’s Department of Molecular Biomedical Sciences and researchers in the Center for Comparative Medicine and Translational Research, wanted to know more about the function of Sp2, a cell cycle regulator that helps control how cells divide. Previous research from Horowitz had shown that too much Sp2 in skin-producing stem cells resulted in tumors in experimental mice. Excessive amounts of Sp2 prevented the stem cells from creating normal cell “offspring,” or skin cells. Instead, the stem cells just kept producing more stem cells, which led to tumor formation.

“We believe that Sp2 must play a fundamental role in the lives of normal stem cells,” Horowitz says. “Trouble ensues when the mechanisms that regulate its activity are overwhelmed due to its excess abundance.” 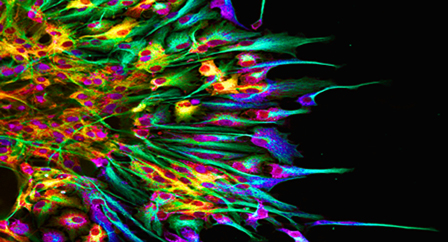 Ghashghaei and his team – led by doctoral candidate Huixuan Liang – took the opposite approach. Using genetic tools, they got rid of Sp2 in certain neural stem cells in mice, specifically those that produce the major neurons of the brain’s cerebral cortex. They found that a lack of Sp2 disrupted normal cell formation in these stem cells, and one important result was similar to Horowitz’s: the abnormal stem cells were unable to produce normal cell “offspring,” or neurons. Instead, the abnormal stem cells just created copies of themselves, which were also abnormal.

“It’s interesting that both an overabundance of this protein and a total lack of it result in similar disruptions in how stem cells divide,” Ghashghaei says. “So while this work confirms that Sp2 is absolutely necessary for stem cell function, a lot of questions still remain about what exactly it is regulating, and whether it is present in all stem cells or just a few. We also need to find out if Sp2 deletion or overabundance can produce brain tumors in our mice as in the skin.

“Finally, we are very interested in understanding how Sp2 regulates a very important decision a stem cell has to make: whether to produce more of itself or to produce offspring that can become neurons or skin cells,” Ghashghaei adds. “We hope to address those questions in our future research, because these cellular mechanisms have implications for cancer research, neurodevelopmental diseases and regenerative medicine.”

The results appear online in Development. NC State graduate students Guanxi Xiao, and Haifeng Yin, as well as Dr. Simon Hippenmeyer, a collaborator with the Ghashghaei lab from Austria’s Institute of Science and Technology, contributed to the work. The work was funded by the National Institutes of Health and the American Federation for Aging Research.