Kinect in the Classroom: Scratching the Surface of Potential

*First graders are using Kinect for Xbox 360 to get to places like Disneyland (on a map, at least), and high school students are graphing mathematical equations with their bodies.*

For fun, yes, but the 19-year veteran teacher at Sunset Elementary School in Craig, Colo., also had an agenda. A longtime lover of technology, Arnett was looking for ways to teach with Microsoft’s controller-free device. When she brought Kinect to her classroom at the start of this school year, the reaction from her enthralled students was “over the top,” she said.

“Bringing technology into the classroom inspires them,” she said. “Their lives are different than ours were, and just giving them a book and a worksheet is not always appropriate anymore. I’m fascinated by Kinect. There’s power for kids in things that capture their interest and are also something they can learn from. We’ve barely scratched the surface of where this can go; it’s limited only by our imaginations.”

Since Arnett’s students started using Kinect to study subjects like animals, geography, and science, she has seen improvements in their comprehension and the retention of what they learn.

Arnett is not alone in her quest – teachers all over the world are using technology like Kinect to teach their students. 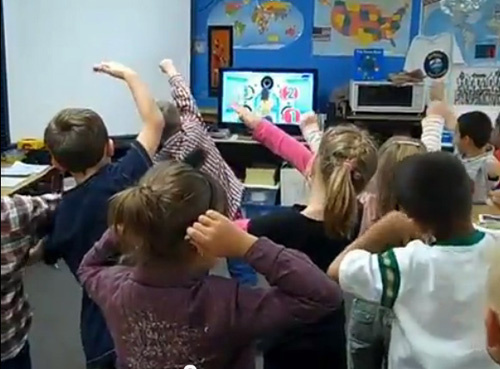 First-grade teacher Cheryl Arnett introduced Kinect into her classroom at Sunset Elementary School in Craig, Colo., and has been delighted by the results, which include outstanding standardized test scores. Image credit: Microsoft

Microsoft is working with schools across the U.S. that are testing using Kinect in the classroom to develop “21st century skills.” This week at the SXSWedu innovative learning conference in Austin, Texas, Microsoft education experts will join a panel with other educators to explore the value of interactive gaming in learning, specifically using Kinect in the classroom.

There will be a lot to talk about, said Cameron Evans, National and Chief Technology Officer for U.S. Education at Microsoft. “Who would have thought one little sensor could turn out to be this phenomenal in the academic space?” he said.

Launched a year ago as a controller-free gaming device for Xbox, Kinect sales topped a world-record 8 million devices in the product’s first 60 days on the market. That made Kinect the fastest-selling consumer electronics device in history, according to Guinness World Records.

The device also has taken on a life of its own outside the living room, thanks to scientists, tinkerers, hobbyists, healthcare workers, and others who have taken the time to dream up and create unique non-gaming applications for it. In the case of education, academics are both using existing Kinect games for educational purposes and creating their own games and applications. 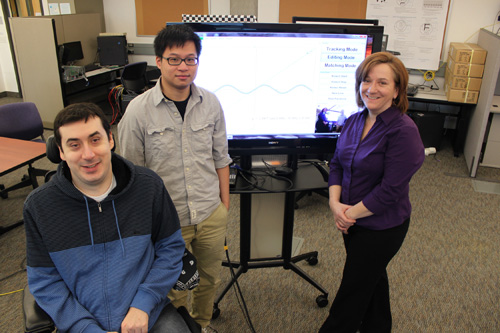 Left to right: Computer science students Jebediah Pavleas and Jack Chang, and professor Robin Angotti have created a custom Kinect app that brings math to life by letting students graph functions like distance, acceleration and velocity with their bodies instead of pencil and paper. Image credit: Microsoft

Pull all the creativity together, and you have the genesis of the so-called “Kinect Effect” – a term coined in the hallways and conference rooms of Microsoft to describe the device’s increasingly widespread appeal and diversity of uses. “It has a lot of people excited about what they can do today, and what they can dream up tomorrow,” Evans said.

Gaming is not a new idea in the classroom – what is new is Kinect, which offers a human user interface that creates a rich and simulated world that participants can be involved in. “We have the ability to get data behind game play to help inform instruction,” Evans said.

The potential behind bringing gaming to education is immense, he said.

Math, as it turns out, is one of the most abstract subjects to learn. Students learn it in books without easily seeing the concrete results of their work in the real world. That, say math teachers, makes it hard for them to retain what they learn.

Robin Angotti, now an associate professor of math education at the University of Washington-Bothell, hopes to change all of that.

Angotti and two computer science students at UW-Bothell, Jebediah Pavleas and Jack Chang, have created a custom Kinect app to help teach students various functions of mathematics such as distance, acceleration, and velocity by letting them plot these equations on a graph in real time using Kinect and their bodies rather than just computing an equation with a pencil on graph paper.

“I was a high school math teacher for 10 years, and I knew I wasn’t reaching all of the students. I knew I was missing something,” Angotti said. 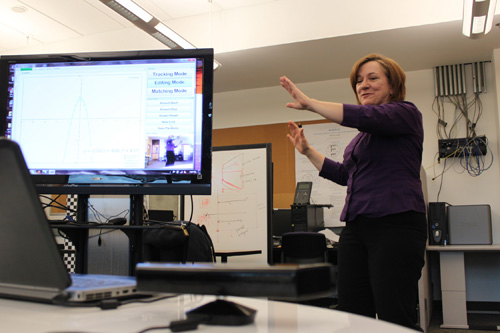 Professor Robin Angotti uses her hands to move a line around a graph and watches its equation change. Angotti wants to use Kinect to change the way students learn math, making its abstract equations and concepts more approachable and concrete. Image credit: Microsoft

So she went back to school to get a Ph.D. in math education. Then she got “bit by the research bug,” which is how she came across Kinect and decided to create a math app that would bridge the gap between the abstract formulas and the real world her students live and breathe in.

“Math is a gatekeeper. If kids don’t get into algebra by their freshman year of high school, they’re off track to major in any kind of STEM [science, technology, engineering or math] field,” Angotti said. “It’s really interesting – data shows that math is a favorite subject when kids are younger. Somewhere in the middle school years, when they’re starting to have to abstract (when math moves from the concrete world of addition, subtraction and multiplication to the more abstract equations of geometry and algebra), we’re losing them. This piece of software makes math less abstract.”

When word got out that Angotti was researching Kinect apps for math, she was inundated with requests for more information and for advice from other teachers.

She, Pavleas, and Chang are already working on a next version of the app that incorporates a number of new features including a two player mode, so students will be able to use their bodies to explore math – and perhaps even solve the classic “two trains traveling at different speeds” story problem.

“It’s amazing. I think we’ve only scratched the surface. I see so many applications for education,” Angotti said. “We’re not just saying here’s the equation, or telling them what to do and having them repeat it. It’s a phenomenon where they can reach up and touch the equation, and move it around. All of a sudden they’re asking different questions, and there’s this sense of understanding.”

Students in the United States have notorious struggles with science, technology, engineering and mathematics (STEM) education. The U.S. Department of Labor predicts that by 2014, the U.S. will have more than two million STEM-related jobs, but there may not be enough qualified workers to fill them.

Fewer than 15 percent of current U.S. college undergraduates are pursuing degrees in science or engineering—compared to more than 30 percent in India and more than 40 percent in China.

“In a nutshell, it’s about America’s competitiveness. Our readiness for college, career, and life is just not there,” Evans said. “In some ways, it’s because the students’ engagement isn’t there. That brings with it a ripple effect that’s going not just across communities, but across generations and time.”

In Colorado, Arnett’s first grade class is planning a trip to Disneyland – virtual Disneyland, that is, which they will visit with the Kinect game Disneyland Adventures. But not before they learn budgeting and calculate the finances of the trip, learn some geography should they choose to drive, and even take a field trip to the airport to learn about air travel.

At the end of the project, each group of first graders will get to spend 30 minutes playing Disneyland Adventures and will have to agree together on how to spend their time in the virtual Magic Kingdom.

At age 40, Arnett switched careers from banking to become a teacher. She’s always loved technology, but as a teacher she helps others love it too, pioneering a technology-rich classroom, school, and school district complete with smart boards, document cameras, and now Kinect.

She’s also become an advocate for innovative technology, and has traveled around the world to meet and collaborate with other teachers through programs such as the U.S. Innovative Education Forum, presented by Microsoft Partners in Learning “The world has changed. My life has changed. I have friends from all over the world I talk to on a daily basis, and it’s all because of technology,” she said. “Never would I have imagined this for myself, but these kids are going to be doing different things in their lives ahead of them, more than I can imagine right now.”

Embracing technology has not only changed her life, but her classroom. Her students are now doing a water study project with classes in Brazil, India, Saudi Arabia and Taiwan. The students use Skype to speak to children in other classrooms around the world. They watch webcasts from the Smithsonian Institute with experts, researchers and scientists who talk to them and teach them remotely on a variety of subjects.

Add it up, and technology and Kinect have earned a permanent place in her classroom.

“You couldn’t take me back,” she said. “And the teachers don’t have to know how to do everything – get the kids involved. There are a lot of things I don’t know the answers to, but I’m willing to work with them, and find the answers with them. We need to be the facilitators, the ones who make these opportunities available. This is important. Learning is real.”