A Bird’s Song May Teach Us About Human Speech Disorders

Can the song of a small bird provide valuable insights into human stuttering and speech-related disorders and conditions, including autism and stroke? New research by UCLA life scientists and colleagues provides reason for optimism.

The scientists discovered that some 2,000 genes in a region of the male zebra finch’s brain known as “Area X” are significantly linked to singing. More than 1,500 genes in this region, a critical part of the bird’s song circuitry, are being reported for the first time. Previously, a group of scientists including the UCLA team had identified some 400 genes in Area X. All the genes’ levels of expression change when the bird sings.

“We did not know before that all of these genes are regulated by singing,” said Stephanie White, a UCLA associate professor of integrative biology and physiology and senior author of the new study. She believes the 2,000 genes — at least some of which she believes are also shared by humans — are likely important for human speech. 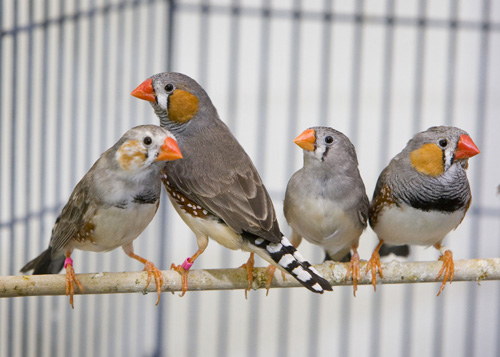 The research is published in the online edition of the journal Neuron, a leading neuroscience journal, and will appear in an upcoming print edition.

“A method that (UCLA co-author) Steve Horvath developed lets us see what genes are changing together and, therefore, which genes are linked in a network,” White said. “We can see which are the hub genes that are the most connected to other genes, as in a social network — the popular kids. We can also identify the genetic equivalent of the lonely kids. Steve’s analysis lets us group the genes together and see who is interacting with whom.”

Many more genes are involved in vocalization than scientists had previously known. While language is uniquely human, it has components — such as the ability to create new sounds — that songbirds and other animals share with us. The zebra finch may create new sounds using the same genes as humans, said White, who is also a member of UCLA’s Brain Research Institute.

Male zebra finches learn to sing a courtship song between 35 days and 100 days after hatching, at which point they are sexually mature. Area X is located in the male finch’s basal ganglia, beneath the brain’s cortex. Only males have the full set of circuitry that allows them to mimic sounds. Female zebra finches don’t learn the courtship song and don’t have a brain region similar to Area X. Humans don’t have an Area X either.

“In your brain, I know that the basal ganglia is involved in your speech, but I don’t know exactly which cells,” White said. “If I knew which cells, I could see what the genes are. We can’t do that in humans, but we can in zebra finches — and we have.” 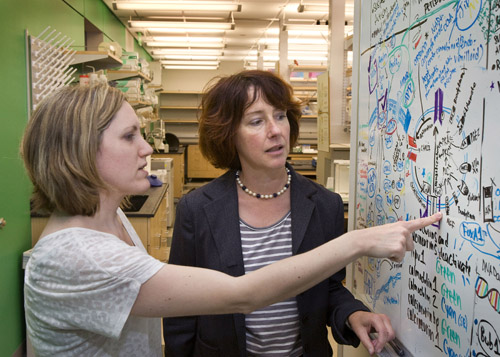 Two genes that seem to be especially important are FoxP2, a “master gene” that directs many other genes to turn on and off and which is critical for both human speech and birdsong, and reelin, a gene that is suspected of causing autism susceptibility in humans. Autistic children often have language difficulties. Both reelin and FoxP2 may play a critical role in human speech and speech disorders.

“No one had ever thought that reelin has a role in vocalization,” White said. “We have now found that it is likely important for vocal learning.”

A study published in 2001 revealed a single mutation in FoxP2 in each member of a family in England with a severe speech disorder. Over four generations, half the members of this family had the speech and language disorder, and each of these family members had the mutation. Those family members without the disorder didn’t have the mutation.

Recent neuroscience research has provided insights into the connection between the brain and our behavior, including the ways in which our behavior can influence gene expression. 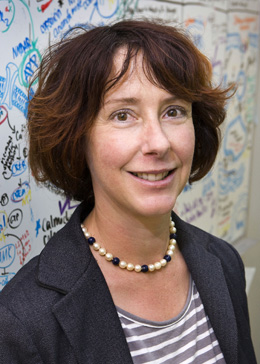 “Everybody knows the brain controls our behavior, but in neuroscience, more recently, we have been learning that our behaviors also control our brain and change the way our brain operates,” White said. “If you’re a professional pianist, for example, you actually expand the territory in your brain that is devoted to playing the piano. When you practice the piano, a suite of genes gets turned on. When you practice hitting a tennis serve or a baseball, a suite of genes gets turned on. Our findings suggest different suites of genes get activated for different behaviors.

“How does behavior change the brain? One way is by changing the expression of genes. A specific behavior can activate many, many genes. How we behave can, over time, actually change genes in our brain and affect how we subsequently behave.”

White’s laboratory showed in earlier research that when adult male zebra finches sing, there is a dramatic decrease in the amount of FoxP2 in Area X.

In the current study, Julie Miller, a UCLA assistant researcher in integrative biology and physiology who conducts research in White’s laboratory, let 27 male zebra finches sing as much as they wanted (18 of them sang) for two hours in the morning — an activity that reduces FoxP2.

She then removed Area X from the zebra finches’ basal ganglia. She also removed the tissue next to Area X, which is still part of the basal ganglia and contains the same genes but is not important for singing; this tissue is involved in movements such as flying and perching.

Miller and Austin Hilliard, a graduate student in UCLA’s neuroscience interdepartmental program who also conduct research in White’s lab, then studied whether the same genes were changing in Area X and in the other tissue. Genes can be “on” or “off,” but there are degrees, like with a light dimmer, White noted.

“You ask, ‘Is it the same suite of molecules going up and down when the bird sings as when the bird hops?’ The answer is no; they are very different,” White said. “We know exactly what neurons are controlling this behavior. We can isolate them.”

There are approximately 9,000 species of birds, approximately half of which are songbirds. Dolphins, elephants and some bat species also mimic vocalizations, White said.

There are important similarities between the human brain and the songbird’s brain.

“I’m very interested in human behavior,” White said, “but humans are too complicated to study rigorously at the cellular and synaptic level. To study problems of speech, we need a model that specializes in learned sounds, like the songbird.”

In future research, White’s laboratory will study the role of reelin in the zebra finch and in mice. She and her colleagues will also continue to study FoxP2. She also plans to study hundreds of genes that move together.