IBM’s 2013 patent results represent a diverse range of inventions poised to enable significant innovations that will position the company to compete and lead in strategic areas–such as IBM’s Watson, cloud computing, Big Data and analytics. These inventions will also advance the new era of cognitive systems where machines will learn, reason and interact with people in more natural ways.

“We take pride in being recognized as the U.S. patent leader, but patents are only one gauge of innovation. Equally significant is the impact that our patented inventions have when they are used to enable solutions that help clients and societies solve problems,” said Bernie Meyerson, IBM Fellow and VP of Innovation. “Furthermore, the broad range of inventions that these patents represent underscores the need for a patent system that equally and fairly promotes and supports innovation across all technical fields.”

The company’s record 2013 patent count was made possible by more than 8,000 IBM inventors residing in 47 different U.S. states and 41 countries. 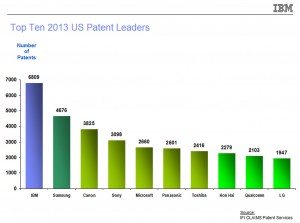 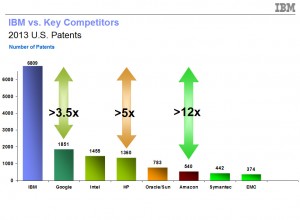 In 2013, IBM patented inventions that will transform how companies use technology across a Smarter Planet and to embrace the cognitive computing era, such as:

·   U.S. Patent #8,510,296 Lexical answer type confidence estimation and application – This patented invention enables IBM Watson to more accurately assess questions posed in natural language and determine confidence in the accuracy of potential answers. To accelerate the impact of patented Watson inventions, IBM has formed the Watson Group, a new business unit that will tap the company’s software, services, research, industry experts and sellers to advance development and delivery of a new class of Watson-enabled cognitive computing apps and technologies to the marketplace.

·   U.S. Patent #8,515,885: Neuromorphic and synaptronic spiking neural network with synaptic weights learned using simulation – This patented invention describes breakthrough brain-inspired computers that lay the foundation for a new generation of cognitive systems via hardware and software co-design. As part of a DARPA-funded Systems of Neuromorphic Adaptive Plastic Scalable Electronics (SyNAPSE) project, IBM is developing a chip architecture that aspires to emulate the human brain’s cognitive capabilities while rivaling its energy and volume efficiency.

·   U.S. Patent #8,422,686: Automated validation and execution of cryptographic key and certificate deployment and distribution – This patented invention automates the lifecycle of cryptographic keys used to encrypt and secure data – from creation and deployment to deletion and can also enhance security for cloud computing applications.

·   U.S. Patent #8,387,065: Speculative popcount data creation – This patent describes an approach for Big Data and analytics computing where a small region or population of analyzed data — known as a popcount — is counted, sorted, and speculatively analyzed in real time for trends or outliers. The idea is based on a counter intuitive premise: that Big Data analysis is small. The method improves data analysis performance, reduces processor resources needed to analyze the data and is based upon modern graph theories. Built into IBM’s POWER processors — the chip within IBM’s Watson and IBM’s Power Systems servers — speculative popcount is advancing cryptanalysis, real-time error correction for streaming data and the cognitive computing era.

·   U.S. Patent #8,402,041: Analytics of historical conversations in relation to present communication  – This patented invention uses Big Data analytics to establish relationships between past and present electronic conversations (social or business) that have similar attributes and provide relevant results in real-time.

Infographic: 21 Years of Innovation & Patent Leadership. In 2013, IBM patented a record-setting 6,809 innovations that will position the company to lead in strategic areas such cloud computing, Big Data and analytics, while advancing the era of cognitive systems. Image courtesy: IBM (Click image to enlarge)

Examples of other interesting and important patented inventions from IBM’s record-breaking 2013 patent output can be found at: https://ibm.co/1kr8i0y