Ladies And Gentlemen, Boot Your Robots!

Miami Speedway in Homestead, Fla., was the place to be late last month for an unusual two-day competition: the DARPA Robotics Challenge Trials. But if you went expecting high-octane cars zooming around the track at blazing speed, you might have been disappointed. The 16 robots participating in the challenge moved more like the tortoise than the hare, as they performed such tasks as opening doors or climbing a ladder; tasks aimed to speed the development of robots that could one day perform a number of critical, real-world, emergency-response tasks at natural and human-made disaster sites.

After the March 2011 Fukushima nuclear accident in Japan, the U.S. government’s Defense Advanced Research Projects Agency (DARPA) created the Robotics Challenge. Its goal is to develop ground robots that can work in dangerous, degraded, human-engineered environments. 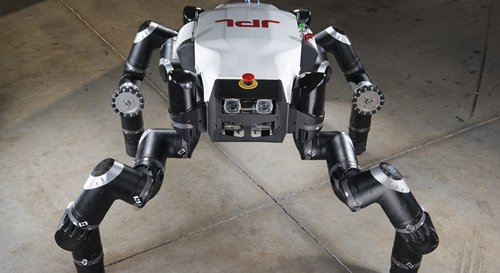 The Jet Propulsion Laboratory’s official entry, RoboSimian, awaits the first event at the DARPA Robotics Challenge in December 2013. Also known as “Clyde,” the robot is four-footed but can also stand on two feet. It has four general-purpose limbs and hands capable of mobility and manipulation. Image credit: JPL-Caltech

At the Miami Speedway, the robots competed against each other in a series of tasks, each worth a maximum of four points. Tasks were subdivided into parts depending on the number of sub-tasks involved. For instance, if there were three doors for the robots to open, each part was worth one point, and so on. The fourth and final point was a bonus awarded if the robot completed all three tasks without any direct (physical) human intervention. Each team had 30 minutes to complete a task.

While most of the entries were engineered to resemble humanoids with two legs, JPL’s RoboSimian tackled tasks like climbing over rough terrain on all four of its limbs (thus the Simian part of the name). Robosimian placed fifth out of 16 teams competing. Only the top eight were named “finalists” and will get the opportunity to receive continued DARPA funding to compete in the Robotics Finals event in late 2014. These teams will be among those battling to win a $2 million prize.

(Check out a video of RoboSimian competing in various challenges at the Miami Speedway here.)

The full list of finalists is online at: https://www.theroboticschallenge.org/ . The California Institute of Technology, Pasadena, manages JPL for NASA. For more information about robotics at JPL, including involvement with the DARPA Robotics Challenge, see: https://www-robotics.jpl.nasa.gov/index.cfm .