University of Delaware assistant professor David W. Colby is co-author of a paper in the March 23 issue of the Journal of Biological Chemistry that suggests protein misfolding may occur early in the pathogenesis, or development, of Huntington’s disease.

Huntington’s disease (HD) is one of several neurological diseases, such as Alzheimer’s disease or prion disease, associated with proteins that fold into abnormal structures. HD is characterized by progressive motor impairment, cognitive decline and behavioral abnormalities, and ultimately death.

The researchers developed a novel technology, called an amyloid seeding assay (ASA), to detect the misfolded protein, huntingtin, in laboratory mice at 11 weeks of age, more sensitively than traditional histology methods which don’t reveal large inclusions until much later in the pathogenic process, about 78 weeks.

According to Colby, the ASA takes advantage of the biophysical tendency of isolated misfolded huntingtin to act as a “seed” for the conversion of a monomeric polyglutamine peptide to a misfolded form, known as an amyloid fiber. 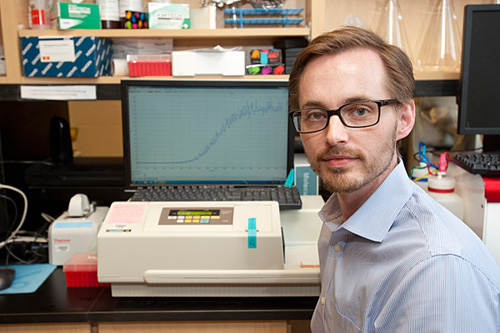 David W. Colby, assistant professor in the Department of Chemical and Biomolecular Engineering, and a team of researchers have developed a novel way to detect the misfolded protein, huntingtin, more sensitively than traditional methods. If successful, the technique may push promising therapies for Huntington's disease to clinical trial faster. Photo by Kathy F. Atkinson

This results in the formation of additional amyloid protein, essentially amplifying the amount of misfolded protein in the sample. The amyloid can then be detected with the dye Thioflavin T and measured by a fluorescent detector.

“Alzheimer’s disease and prion disease brain tissue subjected to the same purification procedure did not do so, demonstrating the specificity of the ASA,” the paper states.

“Testing of experimental therapies is slow and expensive, given the time it takes for a misfolded protein to appear in a form detectable by traditional methods. We believe that the ASA can speed up this initial testing process and push promising therapies to clinical trial faster,” Colby said.

Co-authors of the research study include Sharad Gupta, a postdoctoral fellow at UD, and Shy’Ann Jie, a research specialist in the department. 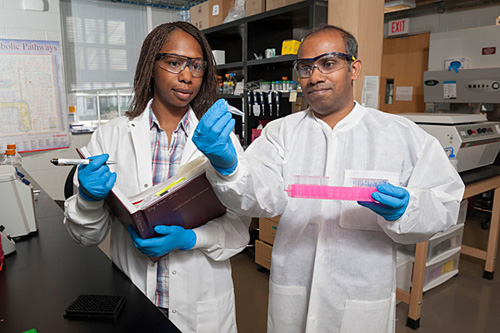 David W. Colby joined UD in 2010 as an assistant professor in the Department of Chemical and Biomolecular Engineering. Affiliated with both the Delaware Biotechnology Institute and the Center for Bioinformatics and Computational Biology, his work involves using cellular and molecular engineering approaches to study diseases of the nervous system.

Colby earned his bachelor’s degree in chemical engineering and chemistry at the Virginia Commonwealth University in 2000. He received his doctoral degree in chemical engineering at Massachusetts Institute of Technology in 2005, before pursuing postdoctoral research at the Institute for Neurodegenerative Diseases, University of California, San Francisco from 2005-2010.