With technological advancements opening the door to less invasive medical procedures, robotic-assisted surgery is becoming increasingly popular, despite being more expensive than traditional surgery. Robotic-assisted surgical removal of the bladder due to cancer is a new approach to the traditional “open” — or more invasive — operation called a radical cystectomy.

Bladder cancer is the fourth most commonly diagnosed cancer in men, and the American Cancer Society estimates that 73,500 people will be diagnosed with bladder cancer in 2012. A third of those will require a radical cystectomy.

During a robotic procedure, the surgeon sits behind a console several feet from the patient and uses joysticks and foot peddles to control a robot; the robot holds and manipulates small surgical tools, which are inserted through tiny key-hole incisions in the patient’s body. 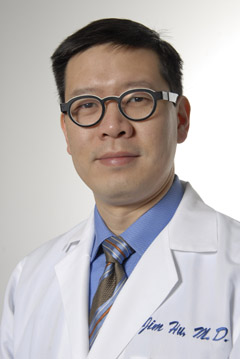 Previously noted benefits of robotic surgery include smaller incisions and less trauma for the patient. In addition, surgeons have a better three-dimensional view and more freedom of wrist movement, and the procedure eliminates hand tremors, making tasks like suturing easier.

But since the robotic surgery field is fairly new, only now are larger, more comprehensive studies being published that compare hospital and patient outcomes of traditional open surgeries to robot-assisted procedures.

A new study currently online in the journal European Urology has found that compared to open surgery for bladder cancer, robotic surgery results in fewer deaths and in-patient complications and reduces the need for intravenous nutrition after the procedure. The procedure, however, is more costly.

“While we expected to see greater expenses associated with the robotic procedure for bladder cancer, we were surprised to see the significant reduction in deaths and complications, particularly this early in its adoption,” said the study’s senior author, Dr. Jim Hu, director of minimally invasive surgery in the urology department at the David Geffen School of Medicine at UCLA.

Hu noted that previous reports of outcomes from robotic-assisted surgery have come from single medical centers and have not included direct comparisons to traditional surgery.

“This is one of the first national population-based studies comparing robotic and traditional surgery outcomes for bladder cancer,” Hu said. It is also one of the first studies to compare the procedures in a variety of hospital settings across the country.

In conducting the research, Hu, along with colleagues at Harvard Medical School and Georgetown University Hospital, used the U.S. Nationwide Inpatient Sample, a national government database of hospital in-patient information that includes data from 1,050 hospitals in 44 states.

The researchers used information from 2009, the most recent date for which data were available on radical cystectomy for bladder cancer at the time the study was conducted. The team looked at 1,444 traditional open surgeries and 224 robotic-assisted laparoscopic procedures. They found that robotic-assisted surgeries accounted for 13 percent of all radical cystectomies in 2009.

One of the most striking findings the team reported was that one in 100 patients receiving open radical cystectomy (2.5 percent) died during hospitalization, but there were no in-hospital deaths for patients who underwent robotic-assisted cystectomy.

The researchers also found that patients who underwent robotic-assisted laparoscopic surgery experienced fewer in-patient complications than those who had the traditional open procedure (49.1 percent vs. 63.8 percent).

The researchers found no difference in the length of hospital stays between the two procedures, with patients who underwent both types of surgery spending approximately eight days in the hospital.

Total costs for the robotic procedure, however, were significantly higher — more than $3,000 higher than traditional open surgery. The researchers said this may be due to longer operation times and greater use of disposable instruments with the robot. Hu also noted that the study didn’t factor in expenses for robot acquisition and maintenance, so the costs may be even higher.

In addition, women were less likely to undergo a robotic procedure, possibly due to gender-based differences in anatomy that make robotic procedures more difficult, the researchers said. Bladder cancer is rarer in women — men are three times more likely to be diagnosed with the disease.

The majority of both types of patients (76.8 percent for the robotic procedure and 67 percent for the open procedure) had key lymph nodes removed during their operations, in keeping with a national practice guideline related to reducing disease recurrence and improving survival. Still, roughly a quarter of robotic-procedure patients and a third of open-procedure patients did not undergo lymph node removal, indicating that both procedures could improve in this area.

Hu noted that while the surgeon plays the most important role in bladder cancer surgery outcomes, better tools may help the surgeon achieve improved outcomes. Just as newer tennis rackets made of synthetic fibers cost more but allow greater precision and power than the wooden rackets of 40 years ago, robotic surgery for bladder cancer has certain advantages over the traditional open approach.

“The history of most technology demonstrates that as more innovations and advances occur over time, the costs may be reduced,” Hu said. “We hope that our study will add to the growing base of outcomes information in the robotics field.”

Hu said the next stage of research will involve expanding the study to follow patients beyond the hospital. The team will also look more closely at the severity of surgical complications, assess tumor characteristics and include other factors that may play a role in outcomes.

The researchers suggest that interested patients ask their doctors if they are candidates for robotic-assisted bladder cancer surgery and make sure to obtain second opinions to gauge the confidence, training and experience of the surgeons.

The study was funded by the American Urological Association Foundation and the U.S. Department of Defense.