EAST LANSING, Mich. — Where there’s water there’s life – even in brine beneath 60 feet of Antarctic ice, in permanent darkness and subzero temperatures.

While Lake Vida, located in the northernmost of the McMurdo Dry Valleys of East Antarctica, will never be a vacation destination, it is home to some newly discovered hearty microbes. In the current issue of the Proceedings of the National Academy of Science, Nathaniel Ostrom, Michigan State University zoologist, has co-authored “Microbial Life at -13ºC in the Brine of an Ice-Sealed Antarctic Lake.”

Ostrom was part of a team that discovered an ancient thriving colony, which is estimated to have been isolated for more than 2,800 years. They live in a brine of more than 20 percent salinity that has high concentrations of ammonia, nitrogen, sulfur and supersaturated nitrous oxide ­– the highest ever measured in a natural aquatic environment.

“It’s an extreme environment – the thickest lake ice on the planet, and the coldest, most stable cryo-environment on Earth,” Ostrom said. “The discovery of this ecosystem gives us insight into other isolated, frozen environments on Earth, but it also gives us a potential model for life on other icy planets that harbor saline deposits and subsurface oceans, such as Jupiter’s moon Europa.” 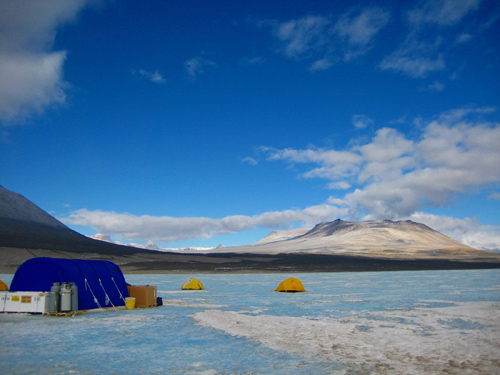 While Antarctica's Lake Vida will never be a vacation destination, it is home to some newly discovered hearty microbes. Image courtesy of the Desert Research Institute.

On the Earth’s surface, water fuels life. Plants use photosynthesis to derive energy. In contrast, at thermal vents at the ocean bottom, out of reach of the sun’s rays, chemical energy released by hydrothermal processes supports life.

Life in Lake Vida lacks sunlight and oxygen. Its high concentrations of hydrogen gas, nitrate, nitrite and nitrous oxide likely provide the chemical energy used to support this novel and isolated microbial ecosystem. The high concentrations of hydrogen and nitrous oxide gases are likely derived from chemical reactions with the surrounding iron-rich rocks.

Consequently, it is likely that the chemical reactions between the anoxic brine and rock provide a source of energy to fuel microbial metabolism. These processes provide new insights into how life may have developed on Earth and function on other planetary bodies, Ostrom said. 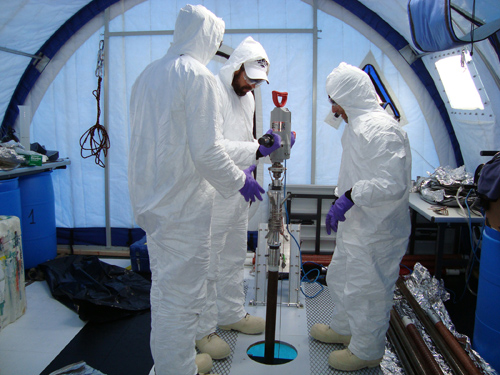