Look at the tip of that old pencil in your desk drawer, and what you’ll see are layers of graphite that are thousands of atoms thick. Use the pencil to draw a line on a piece of paper, and the mark you’ll see on the page is made up of hundreds of one-atom layers.

But when scientists found a way—using, essentially, a piece of ordinary sticky tape—to peel off a layer of graphite that was just a single atom thick, they called the two-dimensional material graphene and, in 2010, won the Nobel Prize in physics for the discovery.

Now, researchers at the University of Delaware have conducted high-performance computer modeling to investigate a new approach for ultrafast DNA sequencing based on tiny holes, called nanopores, drilled into a sheet of graphene.

“Graphene is a two-dimensional sheet of carbon atoms arranged in a honeycomb pattern” Branislav Nikolic, associate professor of physics and astronomy, said. “The mechanical stability of graphene makes it possible to use an electron beam to sculpt a nanopore in a suspended sheet of graphene, as demonstrated in 2008 by Marija Drndić at the University of Pennsylvania.” 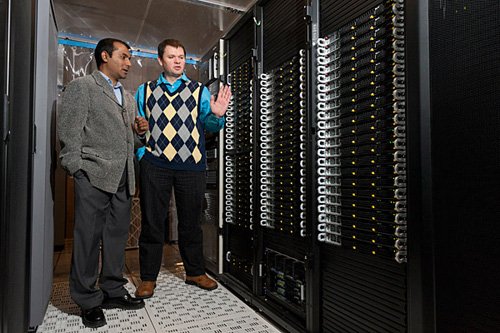 Graphene has been among the fastest-growing areas of study in nanoscience and technology over the past five years, Nikolic said. He calls it a wonder material that has remarkable mechanical, electronic and optical properties and is being investigated for a variety of applications as diverse as plastic packaging and next-generation gigahertz transistors.

In the sequencing that he and other physicists have proposed, a tiny hole a few nanometers in diameter is drilled into a sheet of graphene and DNA is threaded through that nanopore. Then, a current of ions flowing vertically through the pore or an electronic current flowing transversely through the graphene is used to detect the presence of different DNA bases within the nanopore.

“Since graphene is only one atom thick, the nanopore through which DNA is threaded has contact with only a single DNA base,” Nikolic said.

In 2010, three experimental teams—led by Jene Golovchenko of Harvard, Cees Dekker of Delft and Drndić—demonstrated DNA detection using nanopores in large-area graphene. However, Nikolic said, the process moved too quickly for the existing electronics to detect single DNA bases.

The new device concept proposed by the UD researchers uses graphene nanoribbons—thin strips of graphene that are less than 10 nanometers wide—with a nanopore drilled in their interior. Chemists, engineers, materials scientists and physicists have devised various methods over the past three years to fabricate nanoribbons with a specific zigzag pattern of carbon atoms along their edges, Nikolic said. Nanoribbons could enable fast and low-cost (less than $1,000) DNA sequencing, he said, because of the quantum-mechanically generated electronic currents that flow along those edges.

Such quick and inexpensive DNA sequencing could usher in an era of personalized medicine, Nikolic said.

“We used the knowledge acquired from several years of theoretical and computational research on the electronic transport in graphene to increase the magnitude of the detection current in our biosensor by a thousand to million times when compared to other recently considered devices,” Nikolic said. “Two years ago, scientists would have told me our device was impossible, but there are so many people working on graphene that nothing is impossible anymore.

“Every time physicists think something is impossible, materials scientists or chemists come to the rescue—and vice versa.”

Nikolic said he and postdoctoral researcher Kamal Saha have employed their home-grown massively parallel computational codes to simulate the operation of the proposed nanoelectronic biosensor from first principles, using the supercomputer Chimera that UD acquired with support from a National Science Foundation grant.

“This project has to run on 500-1,000 processors for several months continuously,” he said. “We couldn’t have done it without UD Chimera becoming fully operational in early 2011.”

Nikolic, Saha and Drndić have recently published the results of this research in an article in the prestigious Nano Letters, a journal with an impact factor of 12.219 published by the American Chemical Society. Colleagues, led by Drndić at the University of Pennsylvania, will now seek to fabricate the biosensors in their lab, guided by the simulations presented in the article. Nikolic said that this research synergy will, in turn, allow for simulations of improved device designs.

Nikolic is also organizing an interdisciplinary workshop, sponsored by the Centre Européen de Calcul Atomique et Moléculaire, to be held in June in Pisa, Italy. The workshop will bring together some of the world’s leading experts in computational modeling and in the experimental investigation of nanodevices for third-generation DNA sequencing technologies.