Glaciers play a vital role in Earth’s climate system, and it’s critical to understand what contributes to their fluctuation.

Increased global temperatures are frequently viewed as the cause of glacial melt, but a new study of Patagonia’s Gualas Glacier highlights the role of precipitation in the glacier’s fluctuation. The study, conducted by Sébastien Bertrand of the Woods Hole Oceanographic Institution (WHOI) and his colleagues, reconstructs a 5,400 year-record of the region’s glacial environment and climate, comparing past temperature and rainfall data with sediment records of glacier fluctuations and the historical observations of early Spanish explorers.

The study, “Precipitation as the main driver of Neoglacial fluctuations of Gualas Glacier, Northern Patagonian Icefield,” was published March 15 in the Open Access journal Climate of the Past.

As glaciers fluctuate, retreating or adding mass, they dramatically affect the water cycle — locking up fresh water as they amass, causing the sea level to rise as they thaw and retreat. 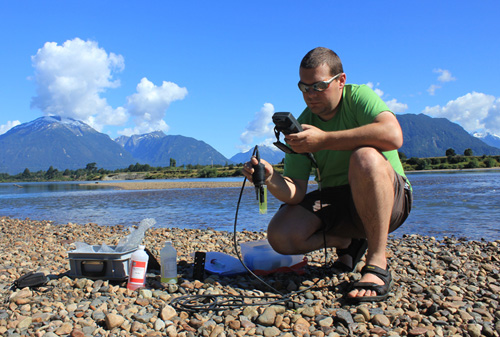 WHOI postdoctoral fellow Sébastien Bertrand, shown here calibrating an instrument along the Rio Aysen, is currently at work on a project to measure the properties of river water and suspended particles in Northern Patagonia. The data will be used to improve the interpretation of fjord sediment records, and will contribute to a larger global rivers project. (Photo courtesy of Zakaria Ghazoui, Renard Centre of Marine Geology, University of Ghent, Belgium)

“Improving our understanding of the impact of climate changes on glacier variability is one of the most pressing aspects of present-day climate research,” says Bertrand, a postdoctoral fellow in WHOI’s Marine Chemistry and Geochemistry department and the Renard Centre of Marine Geology, University of Ghent.

The focus of the work is Gualas Glacier, a 32-kilometer long shifting mountain of ice with an area of 119.2 square kilometers that sits above Golfo Elefantes. It is part of the Northern Patagonian Icefield (NPI), a series of 70 glaciers fed by precipitation that originates in the Pacific Ocean and falls in the rain belt west of the Andes, reaching levels of up to ten meters a year. The majority of the western NPI glaciers have retreated over the last 150 years. 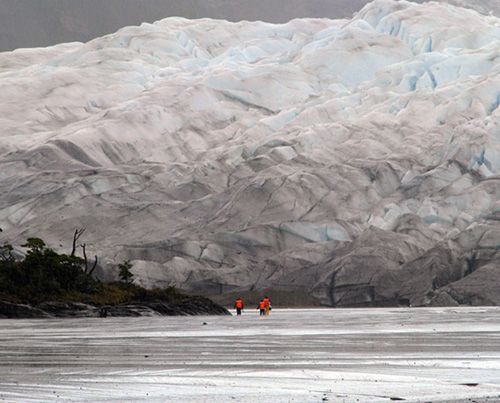 A team of researchers led by Sébastien Bertrand, of the WHOI Marine Chemistry and Geochemistry department, took sediment samples during five weeks of field work in the fjords of Chilean Patagonia. The main goal of the expedition, which was funded by the National Geographic Committee for Research and Exploration, was to sample sources of sediment to the fjords to improve the interpretation of paleoclimate and paleoenvironmental records based on fjord sediment cores. (Photo courtesy of Dr. Claudia Silva)

“These glaciers are retreating as a response to global climate change, but not only because of increasing temperature, which is generally cited as the cause of worldwide glacier retreat,” said Bertrand. “The fast retreat of Gualas, and other western NPI glaciers, during the last century, seems to be driven by a decrease in winter precipitation — snow — rather than by an increase in temperature.”

The study constituted the first effort to use glaciomarine sediments — sediments transported by glaciers or their meltwater to the marine environment — from the fjords of Northern Chilean Patagonia to reconstruct Holocene glacier fluctuations, reaching back 5,400 years. After analyzing a sediment core gathered in the central basin of Golfo Elefantes during a 2005 cruise aboard the icebreaker Nathaniel B. Palmer, the scientists reckoned that over five millennia the glacier had seen three major periods of advance. Once this picture was assembled, it was compared with data on regional temperature and precipitation to determine which factor most impacted Gualas Glacier. 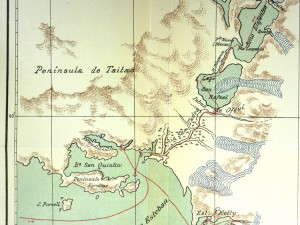 The study incorporated information gleaned from historical documents under the direction of team member Fernando Torrejón, an historian with the University of Concepción (Chile) who specializes in extracting climate and environmental information from written and iconographic documents. Using the explorers’ maps and descriptions of Patagonia’s fjords, Bertrand and his colleagues pieced together the life-story of Gualas Glacier. (Steffen, H.: Viajes de exploracion i estudio en la Patagonia occidental 18921902, Imprenta Cervantes, 1910)

In addition to the geological record, the study incorporates the observations of early Spanish explorers, beginning with Antonio de Vea in 1675. Spanish explorers documented their voyages to Patagonia, noting what they saw, and omitting what they didn’t—or couldn’t—see. Using the explorers’ maps and descriptions of Patagonia’s fjords, Bertrand and his colleagues pieced together the life-story of Gualas Glacier. Through studying these historical documents, the scientists determined that Gualas Glacier has retreated nine kilometers over the last 110 years, including 2.5 km during the last 25 years.

Although this study reveals the glaciers west of the Andes are controlled by precipitation, Bertrand says that glaciers on the eastern—leeward—flank of the icefield may be controlled by temperature.

“It needs to be tested if we are to understand and better predict the impact of global climate change on Patagonian glaciers,” he said. He added that glaciers located in other maritime environments might also be driven by changes in precipitation rather than temperature.

The idea to use historical documents came from team member Fernando Torrejón, an historian with the University of Concepción (Chile) who specializes in extracting climate and environmental information from written and iconographic documents. Bertrand recalls, “I knew his work on some Chilean glaciers, such as San Rafael, so I asked him to participate in this study to complement the results from the sediment cores.”

Torrejón plumbed the records of the 17th-century Spanish explorers archived at the library at the University of Concepción and the National Library of Chile, in Santiago. His contribution added an interesting historical component to the study and confirmed the interpretation of the geological/sediment record.