Researchers at Yale School of Medicine have pinpointed a mechanism in part of the brain that is key to sensing glucose levels in the blood, linking it to both type 1 and type 2 diabetes. The findings are published in the July 28 issue of Proceedings of the National Academies of Sciences.

“We’ve discovered that the prolyl endopeptidase enzyme — located in a part of the hypothalamus known as the ventromedial nucleus — sets a series of steps in motion that control glucose levels in the blood,” said lead author Sabrina Diano, professor in the Departments of Obstetrics, Gynecology & Reproductive Sciences, Comparative Medicine, and Neurobiology at Yale School of Medicine. “Our findings could eventually lead to new treatments for diabetes.”

The ventromedial nucleus contains cells that are glucose sensors. To understand the role of prolyl endopeptidase in this part of the brain, the team used mice that were genetically engineered with low levels of this enzyme. They found that in absence of this enzyme, mice had high levels of glucose in the blood and became diabetic.

Diano and her team discovered that this enzyme is important because it makes the neurons in this part of the brain sensitive to glucose. The neurons sense the increase in glucose levels and then tell the pancreas to release insulin, which is the hormone that maintains a steady level of glucose in the blood, preventing diabetes. 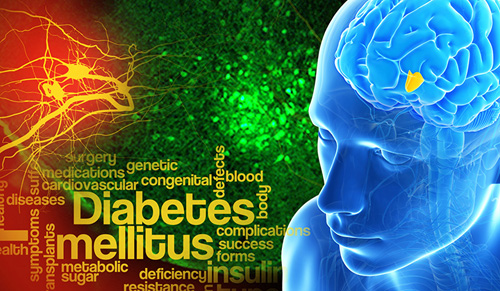 “Because of the low levels of endopeptidase, the neurons were no longer sensitive to increased glucose levels and could not control the release of insulin from the pancreas, and the mice developed diabetes.” said Diano, who is also a member of the Yale Program in Integrative Cell Signaling and Neurobiology of Metabolism.

Diano said the next step in this research is to identify the targets of this enzyme by understanding how the enzyme makes the neurons sense changes in glucose levels. “If we succeed in doing this, we could be able to regulate the secretion of insulin, and be able to prevent and treat type 2 diabetes,” she said.

The study was funded by the National Institutes of Health (DK084065 and DK097566), and the American Diabetes Association.