Karla Toledo of the National Commission for Knowledge and Use of Biodiversity (CONABIO) in Mexico arrived at the University of Delaware to conduct research with Rodrigo Vargas, assistant professor in UD’s Department of Plant and Soil Sciences (PLSC), to review the state-of-the-art carbon cycle science and policy in Mexico.

Toledo came to UD thanks to the Norman E. Borlaug International Agriculture Science and Technology Fellowship Program funded through the U.S. Department of Agriculture (USDA). The program promotes food security and economic growth by providing training and collaborative research opportunities to Borlaug Fellows from developing and middle-income countries.

Toledo will spend 10 weeks at UD before returning to Mexico, with Vargas in turn traveling to Mexico sometime in the near future to continue the collaboration. “The idea is that the fellow will have developed a skill applied to the place where he or she works and that this will strengthen the international collaborations of the University,” said Vargas. 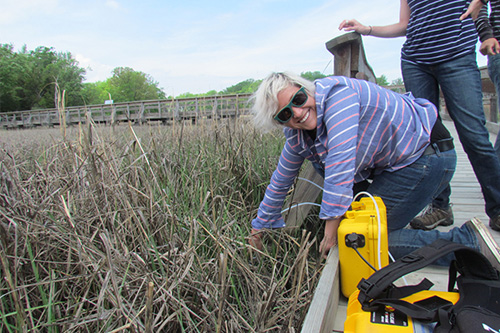 With global challenges requiring new international partnerships and solutions, UD’s College of Agriculture and Natural Resources (CANR) is always looking for ways to collaborate with researchers in developing countries.

CANR Dean Mark Rieger spoke on the importance of international collaborations, saying, “Travel is perhaps the best educator of all. I am glad to see that Dr. Vargas is hosting a Borlaug Fellow and thus providing her with an opportunity to grow and learn in her scientific pursuits here at UD. In turn, the visiting scientists that we host help us to think more broadly about the science we conduct and always open new avenues of collaboration.”

Toledo said her main goal while at UD is to develop a review paper that will be published in a peer reviewed journal that will link science and policy related to carbon cycle science in Mexico. She wants to take an interdisciplinary approach blending science and policy about an important topic with natural, economical and political implications.

“I’m more into public policy, but this research topic is a perfect link between science and public policy,” said Toledo. “I don’t think there are many places where multidisciplinary work happens so this is a good project on which to say this is what we have in science and this is what we have in politics — let’s mix them and do something great about it.” 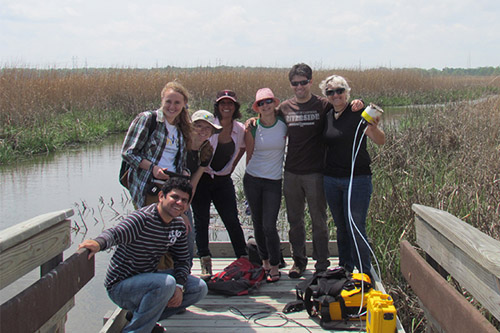 Through a U.S. Department of Agriculture Borlaug Fellowship, Karla Toleda of Mexico (right) has teamed with UD scientists led by Rodrigo Vargas (second from right). Image credit: University of Delaware

Specifically, her study will look at the state-of-the-art carbon cycle science in Mexico and the challenges to achieve current goals. “I’m trying to review all of the agencies, institutions, the politics, the science, the monitoring systems — everything surrounding carbon cycle science — in order to address sustainability, conservation and the effects of global environmental change,” Toledo said.

“One of the challenges is that it’s complicated to navigate the political organization in Mexico related to carbon cycle science because there are many entities that are involved at different federal agencies and different commissions within those agencies,” Vargas said. “All of them will work with topics related to carbon cycle science but from someone outside of Mexico, it is difficult to identify a clear organization as to which agency does what. One of the things that we are interested in is to improve collaborations and carbon cycle science at the North American scale.”

Vargas said that 12 federal agencies and departments coordinate and support the activities of the U.S. Carbon Cycle Science Program. The Carbon Cycle Interagency Working Group coordinates and supports research of carbon cycle science and defines program goals. Furthermore, CarboNA is a joint government-level initiative between Canada, the U.S. and Mexico whose goal is to enhance interactions across North America on topics related to carbon cycle science.

Toledo’s objectives at UD are to learn new techniques to measure greenhouse gases in terrestrial ecosystems, and to review the state-of-the art of carbon cycle science in Mexico. Toledo is acquiring knowledge on new technologies and concepts, but she is also working on a science-policy roadmap by compiling a list of agencies, commissions and organizations working on topics related to carbon cycle science in Mexico.

Toledo is also hoping to highlight success stories in Mexico, specifically in the Mesoamerican Biological Corridor, where she conducts research.

“The idea is not to highlight all the potential stories within Mexico but just to have an overarching view of carbon cycle science at the national scale, and highlight a success story in the southeast of Mexico, specifically in the Mesoamerican Biological Corridor,” Vargas said. “By highlighting current efforts, success stories and a roadmap of science and policy we are working towards improving visibility of carbon cycle science in Mexico, and consequently open new opportunities for international collaborations across North America.”

Vargas said that another goal of the project is to establish a long-term collaboration with Mexico’s National Commission for Knowledge and Use of Biodiversity (CONABIO), where Toledo works. Furthermore, these efforts add to an ongoing project supported by a National Aeronautics and Space Administration (NASA) grant to Vargas.

Another important goal of Toledo’s visit to UD is networking, as she gets to interact with UD researchers and professors who share similar areas of interest.

An example of this networking is how Toledo and Janine Sherrier, professor of plant and soil sciences, were simply riding in a car together when the subject of bats was brought up.

“We started to talk about bats and I gave her some information about something completely different to what I’m doing here with the fellowship — I used to work with bats; I’m a rare mixture of things,” Toledo said.

Toledo had worked with one of the primary investigators in Mexico on bats and Sherrier has conducted research on a compound to combat the fungal white-nose syndrome that afflicts the creatures.

“I put her in contact with my adviser, and he sent me some other advisers, so that’s how science works,” Toledo said.