*In “The Great Dying” 250 million years ago, the end came slowly*

The deadliest mass extinction of all took a long time to kill 90 percent of Earth’s marine life–and it killed in stages–according to a newly published report.

It shows that mass extinctions need not be sudden events.

Thomas Algeo, a geologist at the University of Cincinnati, and 13 colleagues have produced a high-resolution look at the geology of a Permian-Triassic boundary section on Ellesmere Island in the Canadian Arctic.

Their analysis, published on February 3, 2012, in the Geological Society of America Bulletin, provides strong evidence that Earth’s biggest mass extinction phased in over hundreds of thousands of years.

About 252 million years ago, at the end of the Permian period, Earth almost became a lifeless planet.

Around 90 percent of all living species disappeared then, in what scientists have called “The Great Dying.” 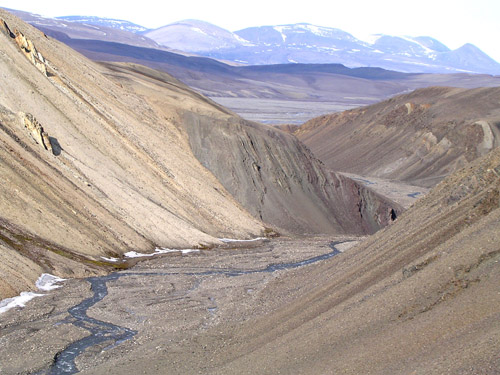 The geology of Griesbach Creek in the Arctic tells an ancient tale of slow extinction. Image credit: C.M. Henderson

Algeo and colleagues have spent much of the past decade investigating the chemical evidence buried in rocks formed during this major extinction.

The world revealed by their research is a devastated landscape, barren of vegetation and scarred by erosion from showers of acid rain, huge “dead zones” in the oceans, and runaway greenhouse warming leading to sizzling temperatures.

The evidence that Algeo and his colleagues are looking at points to massive volcanism in Siberia as a factor. 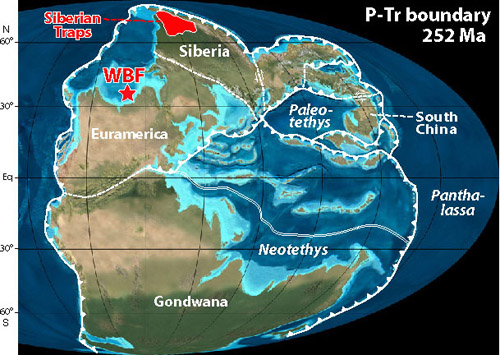 The Siberian Traps form a large region of volcanic rock in Siberia. The massive eruptive event which formed the traps, one of the largest known volcanic events of the last 500 million years of Earth’s geologic history, continued for a million years and spanned the Permian-Triassic boundary.

The term “traps” is derived from the Swedish word for stairs–trappa, or trapp–referring to the step-like hills that form the landscape of the region.

A large portion of western Siberia reveals volcanic deposits up to five kilometers (three miles) thick, covering an area equivalent to the continental United States. The lava flowed where life was most endangered, through a large coal deposit. 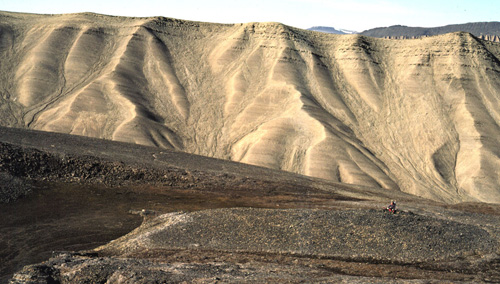 The barren arctic landscape of Ellesmere Island was the site of the scientists' research. Image credit: C.M. Henderson

“The eruption released lots of methane when it burned through the coal,” Algeo said. “Methane is 30 times more effective as a greenhouse gas than carbon dioxide.

“We’re not sure how long the greenhouse effect lasted, but it seems to have been tens or hundreds of thousands of years.”

Much of the evidence was washed into the ocean, and Algeo and his colleagues look for it among fossilized marine deposits.

Previous investigations have focused on deposits created by a now vanished ocean known as Tethys, a precursor to the Indian Ocean. Those deposits, in South China particularly, record a sudden extinction at the end of the Permian. 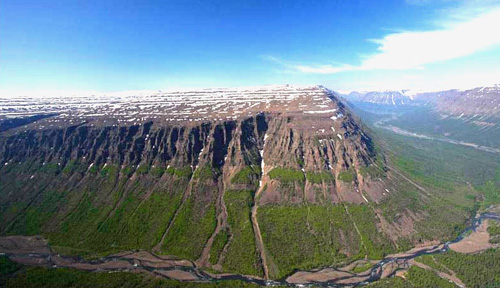 “In shallow marine deposits, the latest Permian mass extinction was generally abrupt,” Algeo said. “Based on such observations, it has been widely inferred that the extinction was a globally synchronous event.”

Recent studies are starting to challenge that view.

Algeo and co-authors focused on rock layers at West Blind Fiord on Ellesmere Island in the Canadian Arctic.

That location, at the end of the Permian, would have been much closer to the Siberian volcanoes than sites in South China. 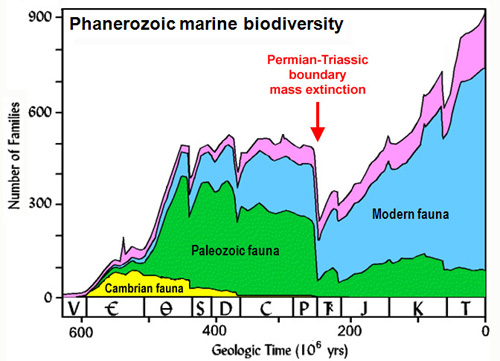 The investigators looked at how the type of rock changed from the bottom to the top. They looked at the chemistry of the rocks and at the fossils contained in the rocks.

They discovered a total die-off of siliceous sponges about 100,000 years earlier than the marine mass extinction event recorded at Tethyan sites.

What appears to have happened, according to Algeo and his colleagues, is that the effects of early Siberian volcanic activity, such as toxic gases and ash, were confined to the northern latitudes.

Only after the eruptions were in full swing did the effects reach the tropical latitudes of the Tethys Ocean. 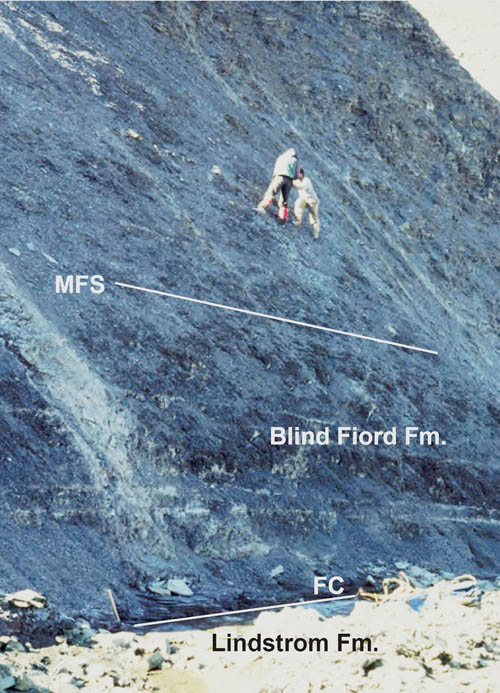 The research was also supported by the Canadian Natural Sciences and Engineering Research Council and the National Aeronautics and Space Administration Exobiology Program.