Getting to the heart of disease

Born in Leningrad (now St. Petersburg), Russia, to Jewish parents before the fall of the Soviet Union, Michael Simons, M.D., says a medical career was “sort of a default.” Anti-Semitism barred Jews from many scientific pursuits, so his parents, both doctors, encouraged his interest in medicine as the basis for a strong natural science education.

Simons’ family immigrated to Boston in 1978. Simons had begun a 6-year medical program immediately after high school in Russia, so he was admitted to Boston University School of Medicine as a third-year student, but he chose instead to start anew, as an undergraduate. “I thought, if I continue in a medical program, I’ll forever have an inadequate undergraduate education,” he says, speaking with a mild accent and an understated intensity.

Knowing nothing about the nearby Massachusetts Institute of Technology (MIT), Simons walked inside and introduced himself. “I figured it’s probably a state school, so it can’t be too expensive,” he says, laughing. He applied and was offered a spot and a scholarship.

After graduating, Simons went to medical school at Yale, where he began to explore cardiology, crossing paths with influential figures in the field such as Barry L. Zaret, M.D., now professor emeritus of medicine, and S. Evans Downing, M.D., professor emeritus of pathology, an adviser for his thesis research in coronary physiology. 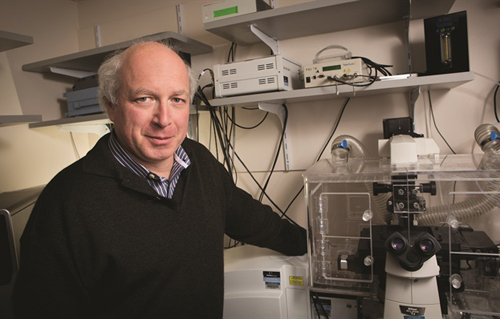 Michael Simons, a leading researcher on the role of arteriogenesis in cardiovascular diseases, directs the Yale Cardiovascular Research Center (YCVRC). The YCVRC’s collaborative spirit and unique scientific climate has attracted top cardiovascular scientists to the School of Medicine and has opened up new research directions and avenues of funding. (Photo by Harold Shapiro)

In 1993 Simons joined the faculty at Harvard Medical School and Boston’s Beth Israel Hospital (now Beth Israel Deaconess Medical Center), whose chief of cardiology was William Grossman, M.D., whose success in recruiting leading molecular cardiologists soon transformed the program into one of the world’s best. “I never knew if it happened by design or by accident, but we were able to do what nobody else could do,” Simons says.

By that time, physicians were routinely using procedures like balloon angioplasty and stenting to treat coronary artery disease, but Simons was interested in doing so by stimulating the growth of new arteries, a process known as arteriogenesis. To that end, he began studying whether recently discovered angiogenic growth factors might be used to accomplish that goal. Animal research had shown promise, but studies in humans were inconclusive. To better understand arteriogenesis, Simons studied the molecular controls that determine blood vessel growth. He continued this research for seven years as the A.G. Huber Professor of Medicine at Dartmouth Medical School, uncovering new and unexpected mechanisms controlling how the signals of growth factors are processed in their target cells.

Returning to Yale in 2008, Simons succeeded Zaret as the Robert W. Berliner Professor of Medicine and chief of the medical school’s Section of Cardiovascular Medicine, and he launched the Yale Cardiovascular Research Center, which has become a research powerhouse under his direction.

Simons’ work holds great promise beyond the treatment of coronary disease. “There are distinct signals that control cell fate and thus the type of vasculature that’s formed,” says Simons, also professor of cell biology. By manipulating these signals, his work suggests, the growth of arteries, veins, and lymphatic vessels can be stimulated in a targeted way to treat arterial, venous, and lymphatic diseases—and he also believes that manipulating the vessels that supply blood to tumors may one day lead to new possibilities for treating cancer.