Some Alaskan trout use flexible guts for the ultimate binge diet

Imagine having a daylong Thanksgiving feast every day for a month, then, only pauper’s rations the rest of the year.

Organs such as the stomach and intestines in the Dolly Varden doubled to quadrupled in size when eggs from spawning sockeye salmon became available each August, the researchers found. They were like vacuums sucking up the eggs and nipping at the flesh of spawned-out salmon carcasses.

Then, once the pulse of eggs and spawning salmon ceased, the guts shrank and the fish lived for nearly a year off the reserves they’d built up because there is little else to eat. 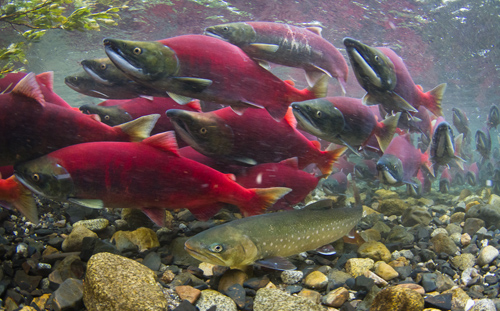 Certain snakes, birds about to migrate and Atlantic cod in the laboratory are known to grow and shrink their digestive track in response to gorging, but this is the first time researchers have documented wild fish doing so, according to Jonathan Armstrong and Morgan Bond, UW doctoral students in aquatic and fishery sciences when the work was conducted. They are the authors of a paper in the Journal of Animal Ecology published online March 20.

Dolly Varden, bull trout and brook trout are among the North American members of the char family, part of the larger trout and salmon lineage. These particular Dolly Varden live where insects and other prey are scarce because of the long, cold winters. The fish can’t do without the yearly egg “subsidy.” Survival depends on there being lots of returning salmon, spawning naturally.

Depleted runs or rivers full of salmon returning to hatcheries just won’t do it, a factor for managers to consider if it turns out other fish have evolved the ability to grow and shrink their guts to take advantage of food pulses.

“Wild salmon runs have been dramatically reduced across much of the lower 48 states and often are replaced with hatchery fish,” Armstrong said. “When salmon are spawned in hatcheries, bull trout – which are threatened in the Pacific Northwest – as well as juvenile coho salmon and other species of concern to conservationists no longer have the opportunity to feed on salmon eggs, which are an incredible food source.

“Our society invests heavily in restoring stream ecosystems. Our study emphasizes the importance of conserving food webs. You can pay millions of dollars to add wood to a stream and take other steps to restore habitat but if there’s nothing for fish to eat, you might not see positive results,” Armstrong said.

It appears that Alaska is protecting coastal watersheds and conserving the inherent productivity of salmon runs, the authors said, and there are enough salmon to support commercial fisheries that harvest half, or more, of the returning fish as well as upstream consumers like Dolly Varden.

“The intact ecosystems of the Bristol Bay region produce staggering amounts of salmon. Even after half of the sockeye run is harvested, there are still enough fish left over to produce the iconic image of a stream turned red by aggregations of salmon in their bright spawning colors, salmon are so abundant that we can count them from airplanes.” 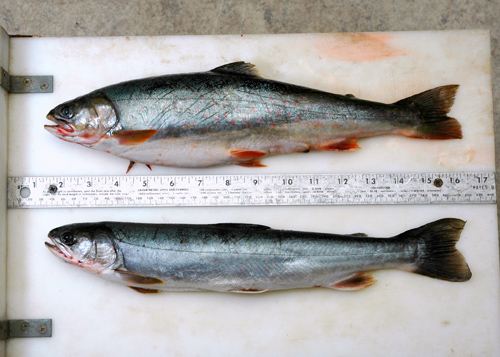 Although the same length, a specimen of Dolly Varden collected in August when salmon eggs are available weighs 50 percent more than a specimen from June when there is no egg subsidy. Image credit: M Bond/U of Washington

In the Alec River, where the work was conducted, so many sockeye salmon return that as females dig nests in the stream they unearth caches of eggs left by earlier spawners, Bond said. The eggs roll along the stream beds, get caught in crannies along banks and concentrate in swirling eddies where Dolly Varden and other animals chow down on them.

“For a long time Dolly Varden were vilified as being bad for salmon, in part because they eat the eggs,” Bond said. “But they don’t dig up eggs, other salmon do. Dolly Varden are eating eggs that aren’t viable.”

After the monthlong all-you-can-eat buffet, it’s important that the Dolly Varden digestive track shrinks because big guts demand a lot of energy from an animal. A normal-size gut, for example, uses about 30 percent of the animal’s energy when it is at rest, Bond said. By weight, the fish’s digestive track takes more energy to maintain than its muscles or brain. By shrinking their gut Dolly Varden can cut their energy costs and survive until the next round of spawning salmon arrives.

“They live close to the edge though, getting skinnier and skinnier each month until salmon return in the late summer,” Bond said.

Conserving energy is crucial when the fish is essentially fasting most of the year. Many fish – including young Dolly Varden – head to the sea seeking food all summer long before returning to their home rivers. But once Dolly Varden reach 16 or 17 inches (40 to 43 centimeters) in length they begin staying put, waiting for the feast to come to them. 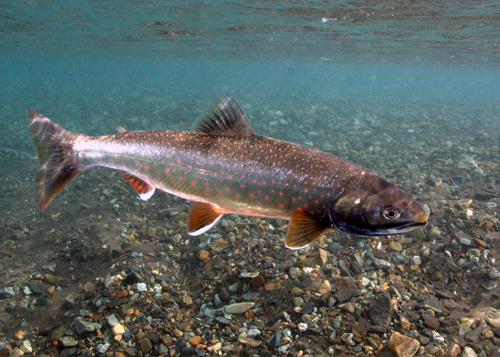 The color of Dolly Varden trout, this one a 16-inch (40-centimeter) adult, deepens when it’s time to spawn. Image credit: M Bond/U of Washington

It’s an evolutionary adaptation that could be protecting them from the predators and other hazards encountered by fish going to sea, the co-authors say.

“These are pretty large-bodied fish living in a place that is relatively nutrient poor but the egg subsidy allows the fish to remain in fresh water year after year. They don’t have to go to sea,” Bond said.

The work was funded by the National Science Foundation, Gordon and Betty Moore Foundation, Alaska salmon processors and the UW School of Aquatic and Fishery Sciences.