From brain to heart to stomach, the bodies of humans and animals generate weak magnetic fields that a supersensitive detector could use to pinpoint illnesses, trace drugs – and maybe even read minds. Sensors no bigger than a thumbnail could map gas deposits underground, analyze chemicals, and pinpoint explosives that hide from other probes.

Now scientists at the U.S. Department of Energy’s Lawrence Berkeley National Laboratory (Berkeley Lab) and the University of California at Berkeley, working with colleagues from Harvard University, have improved the performance of one of the most potent possible sensors of magnetic fields on the nanoscale – a diamond defect no bigger than a pair of atoms, called a nitrogen vacancy (NV) center.

The research team’s discoveries may eventually enable clocks smaller than computer chips yet accurate to within a few quadrillionths of a second, or rotational sensors quicker and more tolerant of extreme temperatures than the gyroscopes in smart phones. Before long, an inexpensive chip of diamond may be able to house a quantum computer. The team reports their results in Nature Communications. 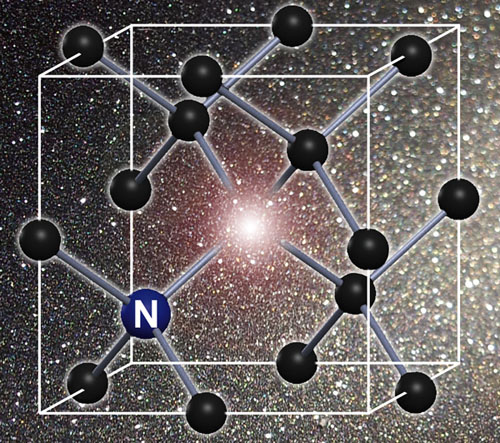 Nitrogen-vacancy centers are defects in which a nitrogen atom substitutes for a carbon atom in the lattice and a vacancy left by a missing carbon atom is immediately adjacent, leaving unbonded electrons whose states can be precisely controlled. NV centers occur naturally in diamond or can be created artificially. Image credit: Berkeley Lab

A sensor made of diamond

Nitrogen vacancy centers are some of the most common defects in diamonds. When a nitrogen atom substitutes for a carbon atom in the diamond crystal and pairs with an adjacent vacancy (where a carbon atom is missing altogether), a number of electrons not bonded to the missing carbon atoms are left in the center.

The electron spin states are well defined and very sensitive to magnetic fields, electric fields, and light, so they can easily be set, adjusted, and read out by lasers.

“The spin states of NV centers are stable across a wide range of temperatures from very hot to very cold,” says Dmitry Budker of Berkeley Lab’s Nuclear Science Division, who is also a physics professor at UC Berkeley. Even tiny flecks of diamond costing pennies per gram could be used as sensors because, says Budker, “we can control the number of NV centers in the diamond just by irradiating and baking it,” that is, annealing it.

The challenge is to keep the information inherent in the spin states of NV centers, once it has been encoded there, from leaking away before measurements can be performed; in NV centers, this requires extending what’s called the “coherence” time of the electron spins, the time the spins remain synchronized with each other.

Recently Budker worked with Ronald Walsworth of Harvard in a team that included Harvard’s Nir Bar-Gill and UC Berkeley postdoc Andrey Jarmola. They extended the coherence time of an ensemble of NV electron spins by more than two orders of magnitude over previous measurements.

“To me, the most exciting aspect of this result is the possibility of studying changes in the way NV centers interact with one another,” says Bar-Gill, the first author of the paper, who will move to Hebrew University in Jerusalem this fall. “This is possible because the coherence times are much longer than the time needed for interactions between NV centers.”

Bar-Gill adds, “We can now imagine engineering diamond samples to realize quantum computing architectures.” The interacting NV centers take the role of bits in quantum computers, called qubits. Whereas a binary digit is either a 1 or a 0, a qubit represents a 1 and a 0 superposed, a state of Schrödinger’s-cat-like simultaneity that persists as long as the states are coherent, until a measurement is made that collapses all the entangled qubits at once.

“We used a couple of tricks to get rid of sources of decoherence,” says Budker. “One was to use diamond samples specially prepared to be pure carbon-12.” Natural diamond includes a small amount of the isotope carbon-13, whose nuclear spin hurries the decoherence of the NV center electron spins. Carbon-12 nuclei are spin zero.

“The other trick was to lower the temperature to the temperature of liquid nitrogen,” Budker says. Decoherence was reduced by cooling the samples to 77 degrees Kelvin, below room temperature but still readily accessible.

Working together in Budker’s lab, members of the team mounted the diamond samples inside a cryostat. A laser beam passing through the diamond, plus a magnetic field, tuned the electron spins of the NV centers and caused them to fluoresce. Their fluorescent brightness was a measure of spin-state coherence.

While different from nuclear spin, electron spin coherence can be extended with similar techniques. Thus, as the spin states of the NV centers in the diamond sample were about to decohere, the experimenters jolted the diamond with a series of up to 10,000 short microwave pulses. The pulses flipped the electron spins as they began to fall out of synchronization with one another, producing “echoes” in which the reversed spins caught up with themselves. Coherence was reestablished.

Eventually the researchers achieved spin coherence times lasting over half a second. “Our results really shine for magnetic field sensing and for quantum information,” says Bar-Gill.

Long spin-coherence times add to the advantages diamond already possesses, putting diamond NVs at the forefront of potential candidates for practical quantum computers – a favorite pursuit of the Harvard researchers. What Budker’s group finds an even hotter prospect is the potential for long coherence times in sensing oscillating magnetic fields, with applications ranging from biophysics to defense.