A tangle of talents untangles neurons

Brown’s growing programs in brain science and engineering come together in the lab of Diane Hoffman-Kim. In a recent paper, her group employed techniques ranging from semiconductor-style circuit patterning to rat cell culture to optimize the growth of nerve cells for applications such as reconstructive surgery.

PROVIDENCE, R.I. [Brown University] — Two wrongs don’t make a right, they say, but here’s how one tangle can straighten out another.

Diane Hoffman-Kim, associate professor of medicine in the Department of Molecular Pharmacology, Physiology, and Biotechnology, is an affiliate of both Brown’s Center for Biomedical Engineering and the Brown Institute for Brain Science. Every thread of expertise woven through those multidisciplinary titles mattered in the Hoffman-Kim lab’s most recent paper, led by graduate student Cristina Lopez-Fagundo. 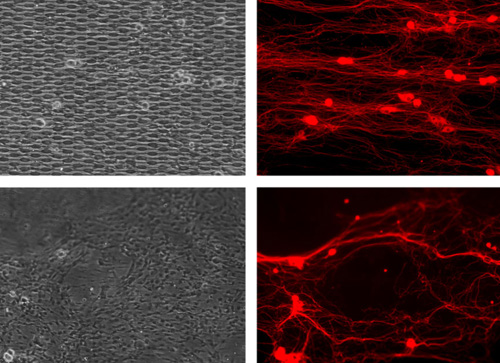 Nervous growth. Brown scientists created patterns in silicone to guide the growth of nerves: regular (top left) and a more natural pattern (bottom left). The resulting nerve growth (red) was much straighter and directed with the regular pattern than the natural. Image credit: Cristina Lopez-Fagundo and Diane Hoffman-Kim/Brown University

In research published online last month in Acta Biomaterialia, Hoffman-Kim and Lopez-Fagundo employed their neurophysiological knowledge and technological ingenuity to unravel a tangle of branching, tendrilous nerve cells, or neurons.

The scientist-engineers helped explain how neurons grow in new tissues in response to physical guideposts, called Schwann cells. Their paper also provided medical device makers with an overt demonstration of how to craft the best artificial Schwann cell implants in silicone to make neurons grow as straight as possible in a desired direction.

“If you’ve got an injury in your arm or your leg then you’d like to have proper reconnection so you can get function,” Hoffman-Kim said. “If it’s a small injury, your body does that fairly well in natural ways that largely depend on the Schwann cells. If the injury gets even just a little bit large then the Schwann cells can’t do it alone.”

Hoffman-Kim and Lopez-Fagundo did not invent the idea of creating an implant to direct neural growth through repaired or reattached tissues. Their clinical goal is to make that technology the best it can be by systematically studying neural growth on Schwann-like substrates. As a matter of basic science, they wanted to learn how neural growth proceeds.

Lopez-Fagundo, whom Hoffman-Kim recruited for her lab in 2008 when she applied to Brown after graduating from the University of Puerto Rico, started the research with rigorous measurements of Schwann cells in cell cultures of rat neural tissue — the cell size, their elliptical shape, and the average distance between any two, as well as the length and width of the “processes” or wispy extensions that connect them.

“We were able to deconstruct the topography of Schwann cells,” said Lopez-Fagundo. “We were then able to manipulate it into different designs to better understand the influence this topography has.” 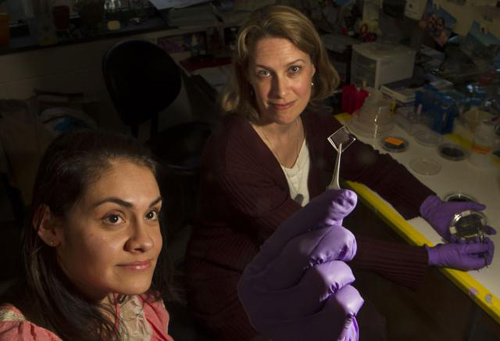 They came up with six archetypal designs. One of them mimicked the somewhat messy real-world layout of Schwann cells but the other five were arranged in neat horizontal rows. In one the elliptical Schwann cell bodies were few and far between. In another they were densely packed and in another their spacing was the exact average of Lopez-Fagundo’s measurements. Another design had no “processes” to connect the ellipses and another had only processes but no ellipses.

Using Brown’s microfabrication facility, Lopez-Fagundo patterned their designs on silicon wafers (like those used to make computer chips) and then transferred them to silicone squares about a centimeter on a side so that the ellipses and processes were in raised relief on the silicone. Then they put each pattern in a cell culture of rat neurons and watched them as the neurons grew across each pattern of artificial Schwann cells. As a control for their experiment, they also cultured cells on unpatterned silicone squares.

All of the patterns encouraged some directed neuron growth compared to the random growth of neurons on the unpatterned squares, but clearly some patterns did better than others.

But by day five, new winners emerged: the patterns where the ellipses were farther than average and nearer than average. Hoffman-Kim said she was surprised that the nerve cells didn’t remain content to follow the straightforward pattern of plain horizontal tracks formed by the process-only pattern. Meanwhile, to some extent, the neurons grew the proper way even without a continuous track at all, for instance in the ellipse-only pattern.

Lopez-Fagundo puzzled over the question of why the ellipses, also called “soma,” matter even as the neurons clearly also grow along the processes.

“I asked myself that question a lot and it wasn’t until I sat at the computer and looked at the [time lapse] videos over and over,” Lopez-Fagundo said. “They use the soma as anchor points. They jump from soma to soma and use the long axis of the soma to guide themselves.”

It’s as if the neurons navigated most effectively when they had both roads (processes) and rest stops (ellipses or soma) where they could get their bearings.

And thus the neurons made their way along the artificially optimized straight and narrow. To the researchers, who also included co-authors Jennifer Mitchel, Talisha Ramchal, and Yu-Ting Dingle, the experiments were a triumph of how the meticulous analytical control afforded by engineering can demystify a complex biological phenomenon.

“Sometimes when I give lectures I say, ‘Biomedical engineers are control freaks and we consider that a compliment,’” Hoffman-Kim said.