How will rainfall patterns across the tropical Indian and Pacific regions change in a future warming world? Climate models generally suggest that the tropics as a whole will get wetter, but the models don’t always agree on where rainfall patterns will shift in particular regions within the tropics.

A new study, published online May 19 in the journal Nature Geoscience, looks to the past to learn about the future of tropical climate change, and our ability to simulate it with numerical models.

Pedro DiNezio of the University of Hawaii and Jessica Tierney of Woods Hole Oceanographic Institution investigated preserved geological clues (called “proxies”) of rainfall patterns during a time when the planet went into opposite gear and cooled dramatically in the last ice age. Land clues included charcoal from fires, and evidence of more sand dune activity and desiccated lakes, all indicating drier conditions, and evidence for higher lake levels and more pollen, indicating wetter conditions. They also looked at records of seafloor sediments containing preserved shells of dead marine organisms; the shells contain higher or lower levels of a heavier isotope of oxygen, depending on the relative salinity of surface waters when the organisms were alive (less salty waters indicate more rainfall over the ocean).

The Indonesian region as it is now (left), and as it was during the last glacial period when the Sunda Shelf was exposed (right). Image credit: Pedro DiNezio, University of Hawaii (Click image to enlarge)

Together the records show that 26,000 to 19,000 years ago during the ice age, conditions were drier throughout the center of the Indo-Pacific warm pool—a vast region of warm ocean waters in the western Pacific region that is the main source of heat and moisture to Earth’s atmosphere. Wetter conditions prevailed on either side of the warm pool.

They then compared this evidence with results from 12 different mathematical climate models that simulate Earth’s climate, which incorporate basic laws of physics, chemistry, and fluid dynamics surrounding air-sea-land-ice interactions. The idea is that the ice age provides a great test “to evaluate numerical models’ ability to simulate climates radically different from the present one,” the scientists said.

Their results surprised them: Only one model, developed by the Hadley Centre for Climate Prediction and Research in the England, reproduced the rainfall patterns they found from the geological evidence: a pattern of strong, widespread dry conditions over Indonesia, Southeast Asia and northern Australia, wetter conditions in eastern Africa, saltier waters (less rainfall) in the eastern Indian Ocean and Bay of Bengal and less salty waters (more rainfall) in the Arabian Sea and the western Pacific.

The scientists say the primary cause for these conditions during glacial times was lower sea levels, which exposed the now-submerged Sunda Shelf as dry land and connected what are now Indonesian islands into one large land mass. However, the finding that only one model is able to reproduce the patterns of rainfall during the glacial period has broad implications for simulating tropical climate change. 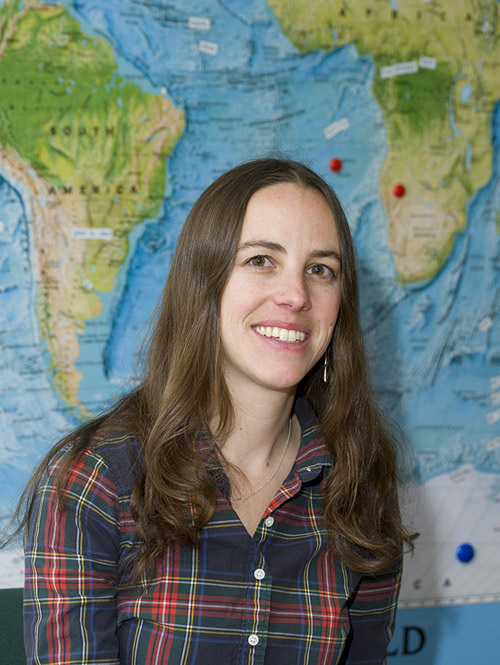 A new study by Jessica Tierney of WHOI and colleagues looks to the past to learn about the future of tropical climate change, and our ability to simulate it with numerical models. Image credit: Tom Kleindinst, Woods Hole Oceanographic Institution

Climate scientists think that the main weakness of the models is their limited ability to simulate convection, the vertical air motions that lift humid air into the atmosphere. Differences in the way each model simulates convection may explain why model results for the glacial period are so different and don’t match the proxy evidence.

“The good news is, the Hadley model combined with the geological evidence show a pathway to improve our ability to simulate and predict tropical rainfall in the future,” Tierney said. “The more we study the mechanisms that governed tropical climate in the past, the better we can predict the climate changes that will affect the billions of people that live in this vast region of the world.”